Log in with Facebook
or
Wrong email address or username
Sign up
Already on BookLikes? Log in!
Incorrect verification code
Please, check your email, the code to access your BookLikes blog was sent to you already.
Enter code:
« Back Send
back to top
Search tags: The-Silmarillion

"Tolkien considered The Silmarillion his most important work, and, though it was published last and posthumously, this great collection of tales and legends clearly sets the stage for all his other writing. The story of the creation of the world and of the the First Age, this is the ancient drama to which the characters in The Lord of the Rings look back and in whose events some of them, such as Elrond and Galadriel, took part. The three Silmarils were jewels created by Feanor, most gifted of the Elves. Within them was imprisoned the Light of the Two Trees of Valinor before the Trees themselves were destroyed by Morgoth, the first Dark Lord. Thereafter, the unsullied Light of Valinor lived on only in the Silmarils, but they were seized by Morgoth and set in his crown, which was guarded in the impenetrable fortress of Angband in the north of Middle-earth.

The Silmarillion is the history of the rebellion of Feanor and his kindred against the gods, their exile from Valinor and return to Middle-earth, and their war, hopeless despite all their heroism, against the great Enemy."

The Silmarillion is a grand, sweeping epic involving the creation of Middle-Earth, the Sun, Moon and its denizens, along with the history of the Elves and their quest to regain some jewelry stolen my the first Dark Lord (i.e. Sauron's master).  Attached is the story of the downfall of Numenor (Sauron makes an appearance), as well as an interesting narrative of the Second and Third Age of Middle Earth.  Elves, dwarves, men, gods, dragons, balrogs and other creatures make an appearance.  The writing is beautiful.  This is not a fun, fluffy read (it is a condensed history book after all) but it is wonderful and worth the effort if you are at all interested in Middle-Earth. 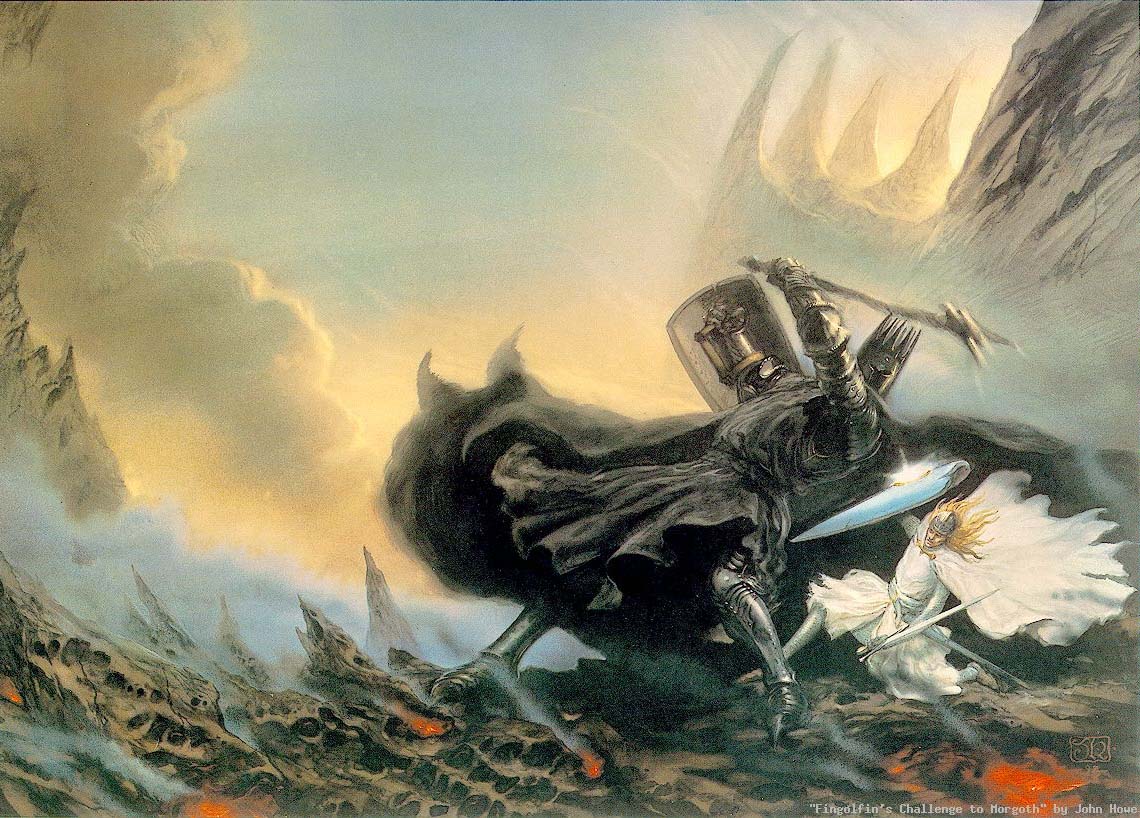 The creation of Middle-earth and its First Age is presented in both mythical and historical accounts that set the stage for The Lord of the Rings in the world’s Third Age.  The Silmarillion is the posthumously published collection of J.R.R. Tolkien’s worldbuilding tales concerning the creation and history of Middle-earth focusing on the First Age but also delving into the relevant history leading to the War of the Ring.

Middle-earth was created through song by the Ainur, though one of their number—Melkor—attempts to disrupt the tune three times but it overpowered by Eru (God).  Eru then showed the Ainur a vision of the world and offered them the chance to enter it and rule, many took up the offer including Melkor.  While many of the Ainur, the more powerful Valar and lesser Maiar, attempted to create a world for the Elves and Man, Melkor repeatedly destroyed their work and seduced some of the Maiar to his side, including Sauron.  The book then shifts into the Tale of the Simarils, which were three jewels crafted by the Elf Feanor that glowed with the light of the Two Trees that were the only source of light before the Moon and Sun were created by the last remnants after their destruction by Melkor who then killed Feanor’s father and stole of the Simarils.  Feanor long duped and corrupted by Melkor’s lies leads the Nordor Elves out of the West to Middle-earth to regain the jewels and do terrible things while Feanor and his sons make a dark oath to recover the jewels.  Over the next 500 years, the various Elven groups in Middle-earth battle the now entitled Morgoth and his minions while later to be joined by Men.  But the curse of Feanor devastates the Nordor and all that become related to them or allied to them or that touch the Simarils.  Eventually a Elf-Man, Earendil arrives in The West to beg for help against Morgoth and the Valar with those Elves that hadn’t join the Nordor attack Morgoth and overpower him but the Simarils are lost in Space, the Sea, and the Earth until the End of the World.  The book then gives an overview of the Second Age and the time of Numenor, their glory and fall by the lies of Sauron who’s defeat by the Last Alliance ends the Age and disperses his power for a time.  And finally, the book ends with the overview of the creation of the rings of power and the Ring by Sauron then an overview of the lead up to and through the War of the Ring as seen in The Lord of the Ring.

While Tolkien did have some wonderful worldbuilding ideas, the mix of mythical and historical tales were hit-and-miss with a lot of dryness poured on.  While there is a somewhat narrative framework to the book, there is no narrative flow.  Though some of this can be attributed to the intermixture of tales that bent towards the mythical or the historical, they weren’t meshed together very well and that is probably because of the posthumous nature of the book as Tolkien’s son Christopher put the book together and added sections using his father’s notes to bridges things within a large framework but there was a randomness to things.

Overall The Silmarillion should be seen a collection of mythical and historical tales within a large framework, but one that doesn’t mesh well and at times is disjointed.  This is a book for hardcore Tolkien fans not general readers who would be stratified with The Hobbit and The Lord of the Rings. The Silmarillion by J.R.R. Tolkien is the story of how the creation of Tolkien's world came to be.

It has been years since I have read this book, and it was such a delight to revisit Tolkien's world from the beginning of the First Age. It is exciting and sorrowful, and I loved spending time with all the characters and visiting the places they traveled. This is a great read for lovers of Tolkien's work. So this was hard to read in just one sitting. It took me several days to finish with this. Honestly I am glad that I did read this, but it's definitely not a book I would re-read again. There were parts of it that put me right to sleep. I think my favorite section was The Third Age.

Tolkien definitely uses The Bible, Greek, and Roman mythology as inspiration for some of the characters and events in "The Silmarillion." I got a kick at first going oh this is supposed to be Hades, this is supposed to be Persephone, this is Neptune, etc. But yeah after a while I just ceased to care about some of the characters we were getting introduced to as we went along. It just read as this person and this person are related to this person, and they had sons named X.

I do have to say that Tolkien mirrors most of the language that is used in The Bible. I would call it excessively flowery language, but some of it definitely evokes a reaction in me.

"Three Rings for the Elven-Kings under the sky, Seven for the Dwarf-lords in their halls of stone, Nine for Mortal Men doomed to die, One for the Dark Lord on his dark throne In the Land of Mordor where the shadows lie."

Doesn't that just make you sit and picture it in your head?

Other times though I found myself re-reading the same lines over and over again since he would sometimes put information on separate people in a sentence and I would go, wait, who is he talking about here?

"Oromë is a mighty lord. If he is less strong than Tulkas, he is more dreadful in anger; whereas Tulkas laughs ever, in sport or in war, and even in the face of Melkor he laughed in battles before the Elves were born. Oromë loved the lands of Middle-earth, and he left them unwillingly"

The flow was not great in this. I think that Tolkien was overly descriptive in a lot of places.

The setting of Middle Earth is fantastic though. I can see why so many people love The Hobbit and the Lord of the Rings trilogy.