Log in with Facebook
or
Wrong email address or username
Sign up
Already on BookLikes? Log in!
Incorrect verification code
Please, check your email, the code to access your BookLikes blog was sent to you already.
Enter code:
« Back Send
back to top
Search tags: WTFuckery Luke and Jessica are heading home to Jessica's house, after a fun and romantic night out on the town. Both are rather young and neither has much money, so they decided to take the night service bus instead of calling a taxi. Let's just call that a fatal mistake, for at least one of them. Who survives? What happened on that late night bus ride? You'll have to read this to find out!

I am a fan of John Leonard's work and it's nearly criminal that he's not more well known. He is building his own legends and stories surrounding his creation: The Scaeth. He has a way of making his characters real to the reader, just enough so that the reader can relate and start to like them... and then he drops them down into some seriously dangerous and scary situations and lets them fight for themselves.

At novella length, NIGHT SERVICE flies by. There's excitement, chases, tension and bloody gore galore! I had a great time reading it and I look forward to more in The Scaeth Mythos.

Get your copy here: NIGHT SERVICE

*Thanks to John Leonard for the e-copy of this novella in exchange for my honest feedback. This is it!* 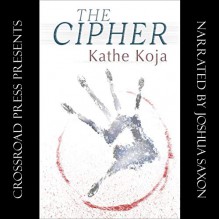 THE CIPHER! I don't even know what to say.

I've only recently joined the church of Koja. It may not be as big as some, Stephen King's say, but there are joys to be found in smaller congregations.

This is the story of Nakota and Nicholas who one day found a black hole, named it the funhole, and changed their lives forever. They stuck different things into the hole, (getting uncomfortable yet?), including bugs, a mouse, and then a hand. What happened to these items when they were thrust inside? You'll have to read this to find out!

I absolutely adore Ms. Koja's prose, and Joshua Saxon the narrator brought it home with flare. This must not have been an easy performance due to the style of the aforementioned prose-especially in the second half of the book because it's a stream-of-consciousness narrative. His voicing was phenomenal.

I'm a bit irritated with myself because the few clips I made of the audio that highlighted the prose apparently did not save. There were short, staccato-like descriptions that...stabbed at my heart. Beautiful, honest and evocative words that my brain immediately transferred to a visual-like a direct injection. For instance "...the flat was full of drizzly day." 7 words that draw a perfect scene. Brief, staccato, BAM: there's the picture-full and complete.

I could go on and on about this prose but I'll leave it at what I've written. Kathe Koja's writing probably isn't for everyone; the reviews seem pretty split on Goodreads. For me, however, I feel like I have been missing out out an author that is perfect for my dark and black heart. I'm on a mission to read everything she's written. I'm a Koja missionary, baby!

*I received the audio-book from Audiobook Boom! and the narrator, in exchange for my honest feedback. This is it!* A young boy falls down on the playground and is diagnosed with a brain tumor. That was probably the best day of his life, because it's all downhill from there.

The beginning of this, the third book in the series, was completely horrific and off the wall. Just when you thought it couldn't get any worse, it got triply worse. I didn't know what was going on, but I trusted Gregor Xane to put it all together and he eventually did. Mostly.

The originality of this series cannot be impeached, I've never read anything like it. I thought a beginning so different from the first two books breathed some fresh air into this installment and that was appreciated. We also got to learn more about the overarching story and I think that's where the 4th book is going to tie everything up.

In the meantime, I cannot help myself from staring at these covers and asking myself WTF? What will the fourth one look like?

You can get a copy here: SON OF HANOVER BLOCK

*Thanks to Gregor Xane for the paperback in exchange for my feedback. This is it!* A home invasion tale which differs in the fact that in this case, the invaders are actually moving in for a week or so.

I've been wanting to read something from The Behrg, and since I pre-ordered his latest book, I was eligible for a free download of one of his previous books-I chose HOUSEBROKEN, and here we are.

This story had so many twists and turns I had a hard time keeping up. The villain stood apart from the many hundreds of villains I've read about previously-that and the extremely fast pace had me hanging on until the final words were spoken. Other than perhaps being a bit too long, this book was excellent.

The narrator wasn't very skilled with female voices in my opinion, but his voicing of the villain was very good. FEAR OF FREE STANDING OBJECTS: A COLLECTION is an impressive and imaginative group of stories that swept through me like a slow moving storm and left me like jello, shivering on the floor.

I can't list my thoughts on all of them here, but the ones that blew me away were:

THE YATTERING-A haunted bookstore. Already, with the title and subject alone, it screams my name.

THE SICKENING-At this point in time, what with COVID19 and its effects, this tale was even scarier than it otherwise would have been.

At least COVID19 doesn't make us kill each other. At least not yet.

AND THE HITS JUST KEEP COMING -A "tables are turned" type of story.

LOTUS PETALS: LIMINAL PERSONAE-Body Horror that put me in mind of Geek Love or some of Michael Blumlein's work.

SYBARITES (OR THE ENMITY OF PERVERSE EXISTENCE) I don't even know what to say about this other than that this was the tale that cemented my thoughts about how great this collection really was.

To be honest, this was a collection where every story worked for me on some level or another. That's a rare occurrence, so I took my time savoring these tales and surrendered myself to whatever it was Mr. Rinaldi wanted to show me. I'm so glad I did!

Get your copy here: FEAR OF FREE STANDING OBJECTS: A COLLECTION

*Thanks to Doug Rinaldi for the paperback arc in exchange for my honest feedback. This is it!*