Log in with Facebook
or
Wrong email address or username
Sign up
Already on BookLikes? Log in!
Incorrect verification code
Please, check your email, the code to access your BookLikes blog was sent to you already.
Enter code:
« Back Send
back to top
Search tags: abiketner 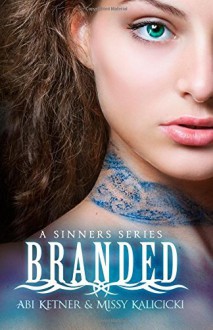 Branded is set in a dystopian world in which you are punished for committing one of the seven deadly sins. Imagine a place as large as a city being used as a dump site (The Hole) for those even accused of committing on of the sins, and it is severely under-guarded. (Yes there are tons of guards but they are there more for making sure the property isn't damaged.) With high walls and no way out, Lexie must live her life in a dangerous place with new mysteries popping up at every corner.

From about 30 pages in, I KNEW that this story would either revolve around finding her brother or father. I'm not sure how the beggar recognized her eyes unless he was truly old enough to have known her father, and from the story, it seems like her father was very loved. I won't like, I thought Keegan was a terrible leader. He's protective but overbearing. He sees his sister for the first time in years and he decides (still imagining her as his BABY SISTER) that she should fight and risk her life. So glad he's dead.

From the beginning it was obvious that she and Cole would 'fall in love'. He was never harsh like the others and pretty much let her do anything she chose to. Cole was a pushover and I really believe that in this case, he is a traitor to his country. Yes, he believes that someone shouldn't be treated badly, but he literally abandoned his job and killed the Commander.

ABOUT THE COMMANDER. It's her stepfather? What the actual fuck? And her stepfather is the Doctor's brother? (I can't remember his name, this book is that forgettable) WHAT THE HECK IS HAPPENING? I feel like it was a last moment attempt to get people to buy their next book.

While I'm not dying to read the next book in this series, I do want to continue on.