Log in with Facebook
or
Wrong email address or username
Sign up
Already on BookLikes? Log in!
Incorrect verification code
Please, check your email, the code to access your BookLikes blog was sent to you already.
Enter code:
« Back Send
back to top
Search tags: alvin-york 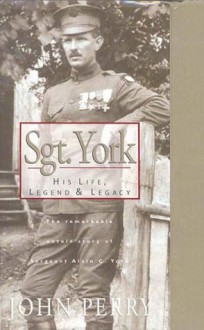 Can't say anything about the book quality - this is just on my "check for sale" list. Most of what I know about this history comes from the Gary Cooper movie Sargeant York - and then film history books. So take this with a grain of salt.

(As usual, probably only a sale at Amazon US.)

The Cooper movie is all about a man who's a Christian pacifist joining the fight to save/fight for his country. While the events of York's life are during WW1, the Cooper film is all about pointing out to Americans why the previously isolationist US should fight WW2. (Aside from the Pearl Harbor part - that attack happened when this movie was playing in US theaters. Many Americans don't know that the US got into the war late - after France was occupied, and after the worst of the UK bombing. So loads of US films in the WW2 era are trying to convince people that the country should be involved and why there was a threat to the US.)

So again, no idea about the quality of this book - it's just another on my list of things to read for more historical background. What York accomplished in WW1? In any war situation going up against guns is amazing (to me anyway) - but knowing that the soldiers of that era were walking into a bloodier type of carnage and gunpower than previous war tech had offered - well, that always makes all WW1 history different. (Not to mention the part where he and seven others escorted 132 captured German prisoners.)

And now for something completely different.

Time for the penguin on top of your television set to explode! (youtube)

Sorry, I can't help myself when I do random topic shifts.

Worth reading not as much for the random weird gods (Egyptian mythology is always fun for that) but for the comments - someone who recently visited Egypt shares some photos of the architecture, and mentions what it's like to be a tourist in Egypt at the moment. (Spoiler, there aren't many other tourists.) That's the sort of thing I love comments for - personal stories related to the subject. ...Oh to get to those comments you do have to scroll through a bit of Stargate discussion. Because it's io9. Heh. (Also 1975 Doctor Who reference to Sutekh the Destroyer in there too.)