Log in with Facebook
or
Wrong email address or username
Sign up
Already on BookLikes? Log in!
Incorrect verification code
Please, check your email, the code to access your BookLikes blog was sent to you already.
Enter code:
« Back Send
back to top
Search tags: bah-humbug From time to time I look through the collections on my Kindle and delete everything I've read already. I just did that the other day and guess what my first reaction was when I saw I've already read this.

After I looked at the blurb I remembered at least that I've actually read some kind of a "A Christmas Carol" themed story last year. That also is quite a good giveaway that I've read it somewhere around Christmas.

So this is the perfect example for a not-bad-but-literally-forgettable story and I'll settle for 3 stars. 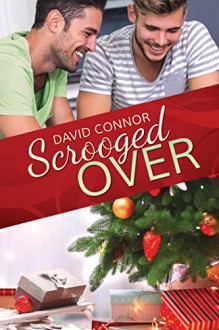 Wow, this was quite awful. I didn't like this at all.

Deke was the Grinch personified. He was such a jerk, bordering on obnoxious. He hates Christmas, and was a loudmouth about it. I get that he was a radio host, and Deke and Dudley's supposedly friendly banter was part of the show. Dudley could hold his own, but some of the things Deke said to him were just plain rude, and offputting. Their on-air banter was supposed to be funny, but it fell short. It was like a joke that no one laughs at, and it just made me wince in discomfort, and in sympathy of Dudley.

I did like Dudley to an extent. He was just a happy, positive, Christmas loving guy, with an unrequited crush on his co-host. I didn't understand what he saw in Deke, though, since he was such an ass. But that might be his attraction to Deke?

"Then he [Deke] stood and pulled his pants partway down in the back. There was the ass--part of it-- all pale and perfect, covered in dark hair Dudley wanted stuck in his teeth."

Not only was Deke a (hairy) ass in regards to what he said to Dudley, but also what he did. I'm not spoiling the things he did, but let me just say, I wanted to strangle Deke with those Christmas lights! Dudley seemed unfazed by Deke's digs, though.

"Deke's sarcasm was as thick as his chest hair."

And he continues to moon, and daydream about Deke.

"He wanted to take him into the john after the show and whip out Frosty's proboscis. He wanted to lick Deke's freeform candy cane and toy with each other's dangling Christmas balls. Dudley dreamed of working Deke's knot with tongue and his finger until he opened the gift of his hot, sexy ass."

All in all, the writing was bad, the descriptions were bad, Deke was bad, the romance was bad, and the brief (thank god) sex scene was one the most unsexy I have ever read. I would have welcomed a fade to black.

I'm sorry to say I didn't like this at all. It put me in an un-Christmas-y mood. Such a bummer, since the cover held a promise of a sweet story. ‘Teddy Bears’ is the most adorable bah-humbug to the-joys-of-Christmas holiday story. It is quite impossible not to feel for Brian McKay. He’s such a nerdy dork he both made me smile and broke my heart. To say this man has body issues would be a gross understatement. He doesn’t like the way he looks and can’t believe anybody could possibly find him attractive. In fact, he is so certain he’s destined to be alone he’s even given up on dreaming about a happy ending. His dislike of Christmas runs very deep and is rooted in bad childhood memories, and as the day comes closer, Brian gets ever more grumpy.

Enter James Olsen who is everything Brian desires and admires in a man and therefore completely out of Brian’s reach—right? Wrong! When James looks at Brian he doesn’t see an overweight and unattractive nobody, he sees a man he wants to spend time with. All he needs to do is convince Brian that he is really interested and not just feeling sorry for him.

The story of Brian’s slow realisation that not only is James really attracted to him but he also deserves that interest is wonderful and very well written. Rather than through a blinding moment of insight it is James’s wooing of Brian through an interest in his hobbies, an obvious attraction, and a genuine date, that Brian comes to accept his own worth.

I loved how this book was both very sexy and almost innocent at the same time. The contrast between the free-for-all nature of the bathhouse and Brian’s almost prudish self-consciousness was both poignant and very clever.

Brian being willing to settle for the memory of one good night with James all but broke my heart. His subsequent journey put it back together again in the best possible way. Brian’s belief in Christmas miracles came through James, for me it came through Brian’s courage and Brandon Witt’s wonderful writing.

Between Brian finding his happy ending and Spike and Angel (read the book if you want to know who they are) this story was nothing short of adorable. As Christmas stories go, this one is a keeper! This short story from the 2016 Dreamspinner Press Advent Calendar serves as a reminder that even when things appear bleak, there are still good people out there, who will lend a helping hand. And really, that's what the Holidays are all about, right?

Carlos Mendez owns a landscaping business and sends every extra penny he earns to his family in Mexico. He has a good crew, and he takes care of them as best as he can, which is evident when he spends a day visiting them all to give them their Christmas bonus. His men all like him a lot, which is also evident when they all step in to... well, you should read this for yourself.

Carlos is fed up with the greed and consumerism he sees all around him, noticing how most people spend and spend but care nothing for their fellow humans.

Ned Williams lives in the same apartment building as Carlos, with his daughter who has cancer. He is at wit's end, and at the end of their means, and he doesn't quite know how he'll manage to give his daughter what may be her last Christmas.

A popcorn garland Ned has made with his daughter for decoration bring Carlos to their door. And then the true meaning of Christmas visits them both.

While we don't really see the two men interact a whole lot, and while there are but romantic undertones instead of an actual romance (which makes this book feel to some extent like a prequel, like the author is planning a whole book for them, and is whetting our appetite with this short novella), the characters feel realistic enough. I would like to know more about them, for sure.

What I loved most about this novella is that it conveys the true meaning of Christmas - helping your fellow man, rallying around those who are in need, and celebrating love, friendship, and family.

A sweet, somewhat fluffy story, one with which to curl up by the fire, with a blanket and your favorite hot beverage. Poor little rich boy Chandler Buckingham, of the Kansas City Buckinghams, is fed up with Mommy Dearest trying to push him into a hetero relationship and appearing (with a suitable date) at the upcoming Christmas Gala/Fundraiser his family organizes every year.

It's just all too much for Chandler, and since he can't seem to find the backbone to stand up to Mommy Dearest, he does the next best (oh so mature) thing - running off to Hawai'i with the help of his PA/best friend since college.

And so Chandler finds himself in a little hovel of an apartment in Maui, which is mostly unfurnished and completely beneath his standards, without a car, without a lot of dough, and without any towels or other household goods.

Fortunately for Chandler, Micah Keolu lives in the apartment across the hall and also serves as part of the maintenance crew at the place, which is helpful when Chandler gets stuck in the elevator upon arrival.

The two men have an immediate spark, and their relationship progresses rather quickly considering the time frame this novella covers, however, they were well suited to each other, and I believed their attraction. Micah acts as a calming influence on the somewhat neurotic Chandler, without any inkling as to the true identity of the guy, and Chandler awakens in Micah a desire to perhaps see more of the world and leave Hawai'i for a little while. Also, steamy bedroom exploits - good stuff!

Chandler, who for a while there goes by Buck, because, you know, he's hiding from Mommy, initially came across as a snobbish, whiny, spoiled, and petulant man-child, sounding younger than his 30 years. As the story progresses, his sense of entitlement is slowly torn away, and the end result is a much more mature version who deserved being with Micah.

I loved Micah, who patiently deals with Chandler's odd behavior, invites him to his family's Christmas celebration and shows Chandler that money isn't everything, and that there are nice people who don't care how much or how little money you have. People who don't judge you by what you can do for them, but make you part of their circle just because.

Of course, this being a romantic love story, we do get the HEA that Micah definitely and Chandler mostly deserved. Including Chandler deftly maneuvering around his mother's plans, because he found his backbone.

Ben's writing style meshed with Noah's for the most part, though it was pretty clear which parts were written by Ben, as his unique style bled through on more than one occasion. I would have liked to see more of this story from Micah's perspective, to be honest, as I liked his character better. The writing is also very descriptive, which worked here very well, and really drew images in my head of the beauty of Hawai'i as the two men explore the island and have fun together.

This was definitely an enjoyable short story with a bit of a lesson for one of the MCs, and a lovely HEA in which Chandler finally takes control of his life. Nicely done.


** I received a free copy of this book from Ben, one of the authors. A positive review was not promised in return. **