Log in with Facebook
or
Wrong email address or username
Sign up
Already on BookLikes? Log in!
Incorrect verification code
Please, check your email, the code to access your BookLikes blog was sent to you already.
Enter code:
« Back Send
back to top
Search tags: blakewell-kenleigh-family-trilogy 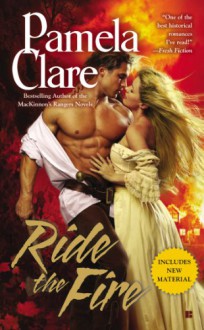 Widowed and alone on the frontier, Elspeth Stewart will do whatever it takes to protect herself and her unborn child from the dangers of the wilderness and of men.  Though her youthful beauty doesn't show it, she is broken and scarred from the way men have treated her.  So when a stranger wanders onto Bethie's land, wounded and needing her aid, she takes no risks, tying him to the bed and hiding his weapons before ministering to his injuries.

But Bethie's defenses cannot keep Nicholas Kenleigh from breaking down her emotional walls.  The scars on his body speak of a violent past, but his gentleness, warmth, and piercing eyes arouse longings in her that she never imagined she had.  As Nicholas and Bethie reveal to each other both their hidden desires and their tortured secrets, they discover that riding the flames of their passion might be the key to burning away the nightmare of their pasts.

Nonetheless, I enjoyed the romance in this book more than I did the previous two books.  In a way, the two main characters were more on equal footing at the beginning, with Bethie not knowing Nicholas's true identity, only knowing that he's a trapper and frontiersman.  Unlike the previous two books, there was no sense that one party had more power than the other, that one side was more subordinate to the other.  Aside from all the kept secrets, the two of them seemed to get along quite sincerely and honestly.

Meanwhile, Ride the Fire also seemed more like an adventurous journey, as we followed our main couple through the frontier towards the east back to safer ground, away from the wars and battles between the Indians, the frontiersmen, and the British army.

In spite of the book being first and foremost a romance, this was also quite fun to follow.  In a way, it also kind of reminded me of one of Pamela Clare's contemporary romantic suspense novels, Breaking Point, if only because the main couple spends a good chunk of time trying to survive the harsh wilderness while avoiding human predators.  And the danger just never seemed to let up.

As I'd stated the adventure part really drew me in, and to be frank, after the two reach civilization, the book kind of plateaus.  And the battle scenes were pretty well-outlined, to be honest.  The romantic angst might have been overdone a bit.  And finally, the ending managed to wrench some FEELS out of me.  The reunion scene between Nicholas and his family was all sorts of heart-warming--kudos!

I really, really enjoyed reading this book.  And a lot more of the typical Pamela Clare style is starting to shine through--at least what I'm familiar with from what I've already read of her books. 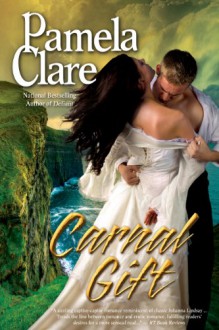 "I expect you to show my friend just how grateful you are.  Your willingness is everything.”

With those harsh words, the hated Sasanach earl decided Bríghid's fate.  Her body and her virginity were to be offered up to a stranger in exchange for her brother's life.  Possessing nothing but her innocence and her fierce Irish pride, she had no choice but to comply.

But the handsome man she faced in the darkened bedchamber was not at all the monster she expected.  His green eyes seemed to see inside her.  His tender touch calmed her fears while he swore he would protect her by only pretending to claim her.  And as the long hours of the night passed by, as her senses ignited at the heat of their naked flesh, she made a startling discovery: Sometimes the line between hate and love can be dangerously thin.

Carnal Gift wasn't much different from Sweet Release in terms of angst and content matter, to be honest.  While the story was quite different, we didn't stray far from the whole formula of the villain wanting to force the heroine into bed with him, and the hero being the hero and saving the heroine's life over and over again.  Meanwhile, we also revisit the whole "hero and heroine are forbidden to be together" device, although this time around, I think that the romance faced more tangible barriers based on law and religion, and other societal and cultural conflicts.  In contrast, Sweet Release needed only to prove that Alec Kenleigh was Alec Kenleigh and all was well, and Happily Ever After.

That doesn't mean that I didn't see the similarities in the two story lines, which made it a little hard to enjoy this book as much as I was maybe meant to.  It didn't escape my notice that this book (and now that I think about it, even Sweet Release), seemed to be written in an "epic saga romance" type of light.  The truth is, I'm not sure if it managed to do that.

On the other hand, it's not like I didn't enjoy this book.  Pamela Clare's writing has this way of pulling you right in.  Whether it's her writing style or just that sense of righteousness that emanates from her main characters, I always find that I can't put her books down.  I DID love the detail given to the Gaelic culture and history.  While some of it felt too deliberately placed, I still found some of it interesting.

Unfortunately, the characters didn't really do anything for me.  While I found young Jamie in the first book quite charming for a four year old boy, adult Jamie in this book is kind of a jackass.  Brighid was a typical standard damsel in distress, and I honestly don't have much to say about her.  Brighid's brothers weren't really all that likable, both because they never seemed to understand how much danger and trouble they were in, and put their own pride before everyone else's lives.  It was quite frustrating.

I liked Matthew and Elizabeth enough as the parental figures in the story, but they didn't really appear a whole lot.

Then there was the standard Pamela Clare repetitive exposition fairy conversations that I've gotten used to seeing in many of her books.  Her characters just can't seem to help but to keep talking about the events that occurred to everyone they come across.  These don't really bug me as much, but I found it interesting that this wasn't really a thing in Sweet Release.

Still, I was entertained and found myself finishing the book pretty quickly. 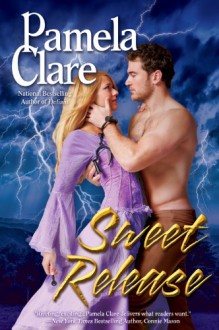