Log in with Facebook
or
Wrong email address or username
Sign up
Already on BookLikes? Log in!
Incorrect verification code
Please, check your email, the code to access your BookLikes blog was sent to you already.
Enter code:
« Back Send
back to top
Search tags: book-5-in-jessica-mcclain-series 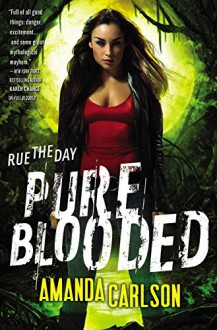 Jessica never has a spare moment to just think anything through. She's too busy trying to stay alive!!

What I liked: When reading a book in this series, I take a deep breath and dive in. The problem then is trying to find another spot to take a breath or put the book down. I'm totally addicted to the Jessica McClain series.

Ms Carlson has built these characters, mainly Jessica, and developed a world in which I love to get lost. Pure Blooded is another roller coaster ride for Jessica and her crew. It seems they go from one disaster to another and it's never just regular in-fighting between species. All the problems/disasters circle around Jessica and the meaning of her being who she is.

I enjoyed that more of the characters had a bigger part to play than in the last book. Marcy, a witch and friend, totally kicks butt with her spells. Also, Jessica is caught in the middle of two Hags; one wants to destroy her as she thinks Jessica represents the end of the supernaturals and the other, Juanita, is trying to help Jessica, as she believes Jessica will end up saving all the different races. Poor Jessica, she doesn't know what's what with her talents and who is a friend or a foe. A few new characters are introduced and I'm anxious to see how they play into the story. I especially feel I'm going to enjoy Jessica's new "secretary".

I know I'm not saying very much about the plot of Pure Blooded and the reason is I focus on the characters and the development of the overall story line. I've not figured out exactly what Jessica is and what she's supposed to do to save the world. It keeps me thinking!

What I didn't like: The Jessica McClain series is one of my favorites because for me, it's pure escapism. I get lost in all the unlikely situations, the characters and what's coming next. I would like to see Jessica and Rourke have more time together as a couple and not fighting for their lives. I know some of my friends don't feel the same way I do but there are books for everyone and their tastes and expectations are different.

I would normally say I got more than my money's worth in Pure Blooded. Alas, I can't and won't! (Beware...rant coming)

I know Ms Carlson is not responsible for the pricing on her books. That's between her publisher and Amazon. Luckily, I can afford my book habit but I am beginning to cringe at the pricing. I even went and got a library card!! Pure Blooded is the first time I've paid full price for a book in this series. I'm getting to the point in my life that I'm counting the pennies I spend on books. I can get the earlier Kindle editions of J. D. Robb's books for less than publishers/Amazon are charging for today's newest releases. There is only $2.50 between the Kindle and paperback editions of Pure Blooded. I'm still in the process of downsizing my collection of physical books and don't want to feel like the only way to get my money's worth is buying a paperback. Dang, it just doesn't make sense to me.

I guess my point is...if you can easily afford it, buy Pure Blooded, if money is a problem; try borrowing it or getting it at the library. 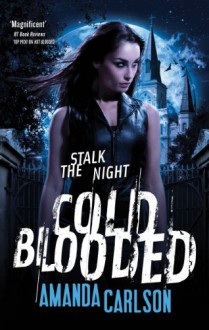 The storyline picks straight up from where we left book two…. Jessica gets home from rescuing Rourke to find that Marcy has been kidnapped by Sorcerers and that James has gone rogue in an attempt to find her, Tally, the leader of the Witches places the responsibility of finding her on Jess. Jess was always going to look for her Bff anyway but that becomes a different story when Jess becomes the hunted and on finding that Marcy isn’t as defenceless as people assume she is… it all becomes about keeping Jess out of the Sorcerers clutches. After receiving some vital ‘information’ & a couple of pitstops, Jess decides to head to the Vampire Coterie in New Orleans to seek protection & fulfil the debt to their Queen Eudoxia early…..that is if she can make it in one piece…. And that’s just the half of it!

This was yet another spectacular book in the Jessica McClain series. I am constantly wowed by this series and even though we are only at book 3, it is definitely established as one of my most favourite series EVER! I love Jess, she is such a great character, she is so fearless and willing to take risks, further evidence is again in this as she puts herself on the line, time & time again. I love her relationship with Rourke, love the whole mating situation and was sooooo grateful they got to be together in this book because we didn’t see much of him until the end of book two. They have great chemistry, the sizzle right off the page and I don’t think I’m alone when I got 27% in and breathed the word …finally. Rourke is totally swoon-worthy & smoking hot!!! Oh and we eventually find out what he is !!! and it’s awesome!!!

It’s not often when you read a book that you are interested in & care about every single character, wanting not only Jess & Rourke’s story but everyone elses (I want Marcy & James story at the minute).

The storyline was great, it is all action, all of the time and just the way I like them. Jess is really causing a stir in the supernatural world, unintentionally causing waves of unrest & change – which I love! – bringing out all of the supernaturals who want to use her for some reason or other and while some a forthright in what they want, others..not so much. It’s so hard to know who to trust in these books, there is always some hidden agenda or misdirection going on and that drags you into the story so much, keeps your interest & holds it all of the way through… its exciting, it’s magical, it’s violent, it’s romantic, it’s hot and as always I’m left counting the days for more. 5*s