Log in with Facebook
or
Wrong email address or username
Sign up
Already on BookLikes? Log in!
Incorrect verification code
Please, check your email, the code to access your BookLikes blog was sent to you already.
Enter code:
« Back Send
back to top
Search tags: brian-gordon 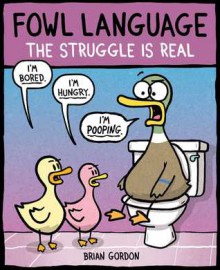 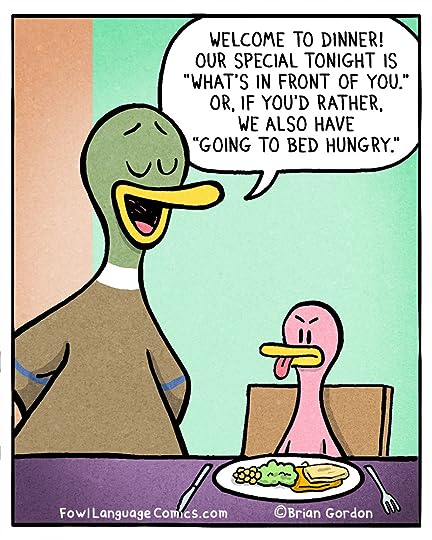 I would like to thank NetGalley and Andrews McMeel Publishing for providing me a copy of this book in exchange for an honest review.

A couple of years ago, I had read a graphic novel called “Tales from the Crib” which was written by Henrik Drescher and it detailed the struggles of parenting in a humorous way. Several years later, I came across this interesting new graphic novel that I received from NetGalley called “Fowl Language: The Struggle is Real” which is by Brian Gordon and it also details the struggles of being a parent in a humorous way and I enjoyed this graphic novel as much as I enjoyed “Tales from the Crib!”

Brian Gordon’s writing: Oh my gosh! I still cannot stop laughing after reading this graphic novel! Brian Gordon has done a fantastic job at writing this graphic novel as I really enjoyed the harsh trials of being a parent being shown in a humorous and satirical way! I loved seeing the scenes where the father duck is trying so hard to deal with his children, while trying to get some peace and quiet, whenever his kids are away as it does hit home for many parents who have to cope with dealing with their children’s demands. But at the same time, this graphic novel shows the struggles that parents have to go through with their children in such a hilarious way that I cannot help but laugh at the father duck’s misfortune at dealing with his kids! Probably two of my most favorite moments in this graphic novel was one where the father duck is imagining a parody for the TV series “24” by titling it “21” and the joke here is that the father duck has to find a TV program that his kids would sit down and watch so he can have time to do the chores around the house (luckily, the program that the kids are watching is ninety minutes long, giving him even more time to do his chores). The other moment I enjoyed was the one where the father duck is trying to explain to his kids about what a record player and a CD is since the kids are only familiar with YouTube and it reminded me of the few times where I try to explain to some little kids about what a CD player is since some of them grew up listening to music on an iPhone or through YouTube.

Brian Gordon’s artwork: Brian Gordon’s artwork is both cute and hilarious to look at as are all the ducks in this graphic novel are drawn in a cute squat style and I especially loved the images of the father duck having wide popped out eyes whenever he gets shocked or annoyed by his kids’ hijinks. The simplistic style of the artwork also brings out the humor in the situations that the characters get into as the highlight of the artwork is seeing the ducks’ reactions to whatever hilarious situations they all get into. 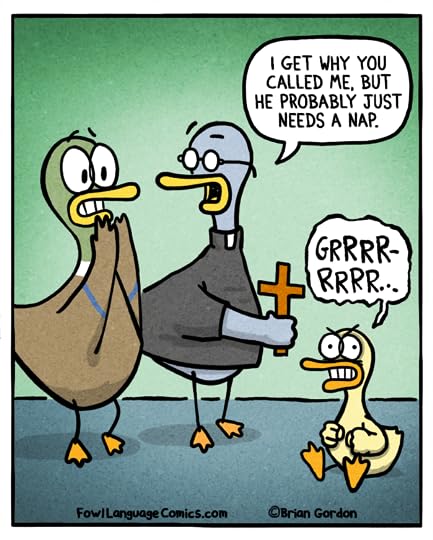 For anyone who does not like strong language, there is some usage of the “f” and “s” words respectively and some readers might be taken aback by the coarse language clashing with the cute artwork displayed in this graphic novel.

Overall, “Fowl Language: The Struggle is Real” is a hilarious read for adults who are parents or are becoming parents and want to find a book that pokes fun at the tough trials of parenting! I am definitely going to be reading the rest of this series pretty soon! 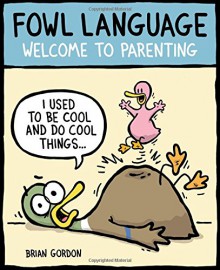 But I still laughed so hard!

It was in a day when I was feeling really down. I needed some laughs and this book made it for me. I'm not into comics exactly but when it's good, it's good.

And it's even better if it makes you smile for a while. 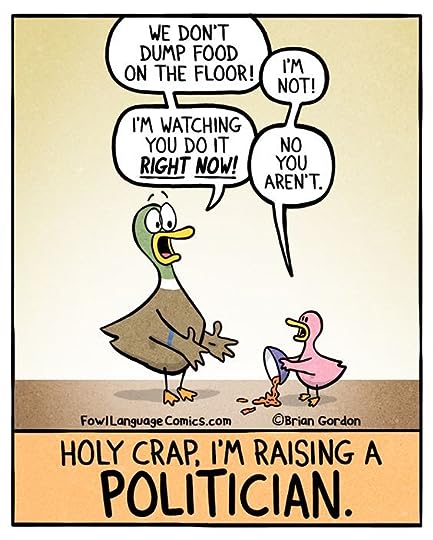 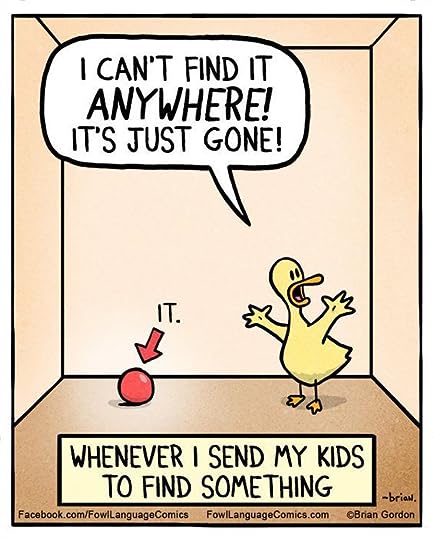 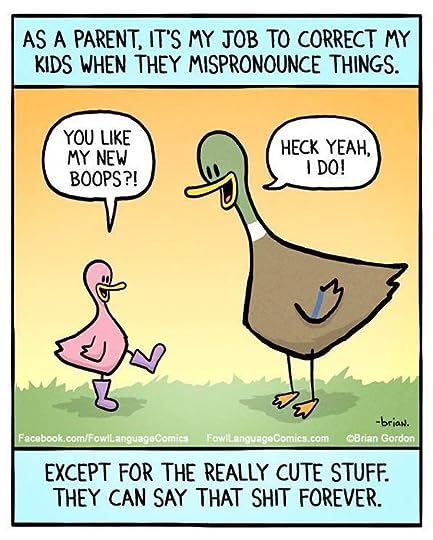 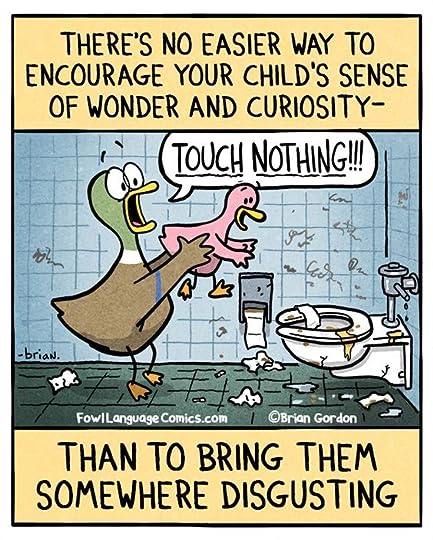 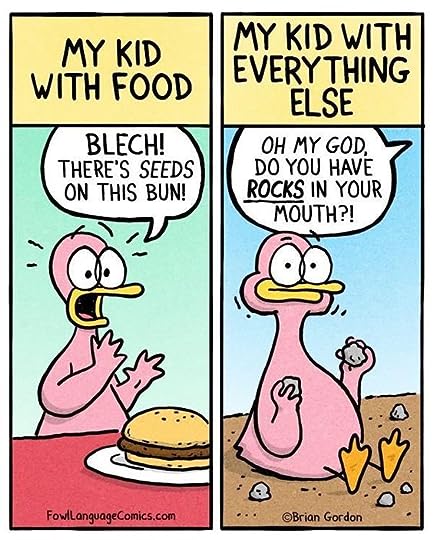 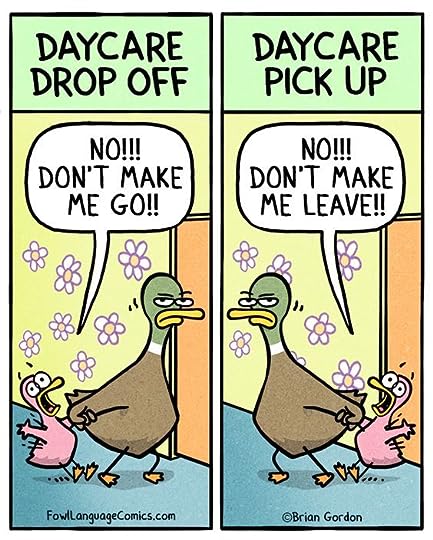 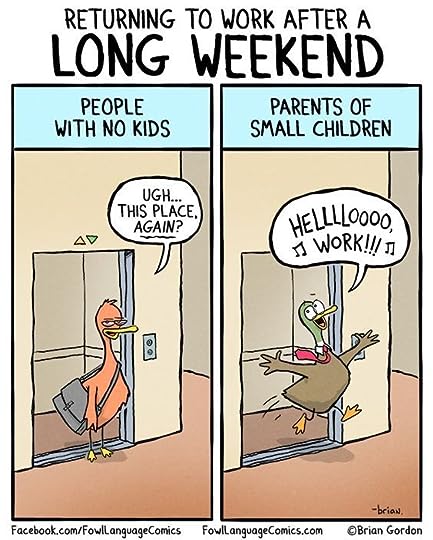 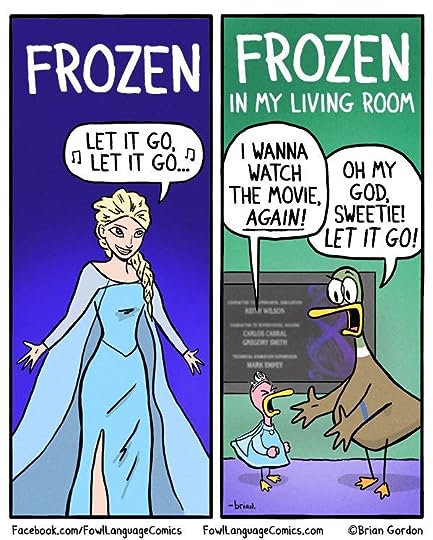 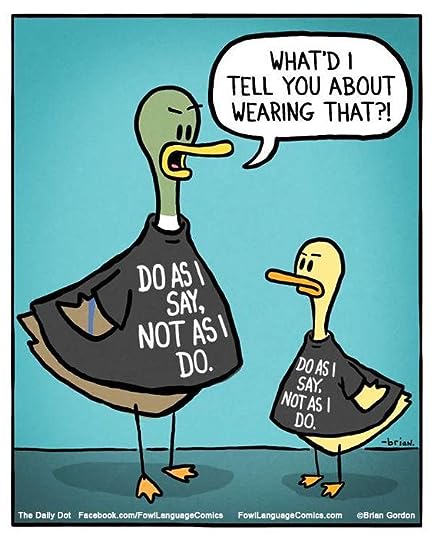 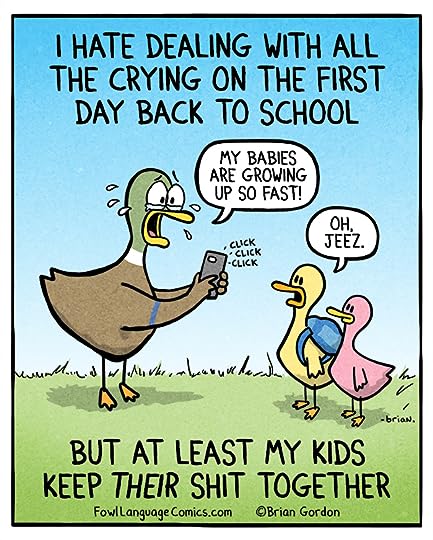 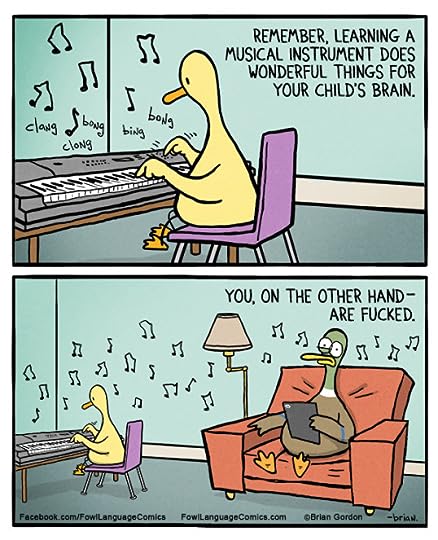 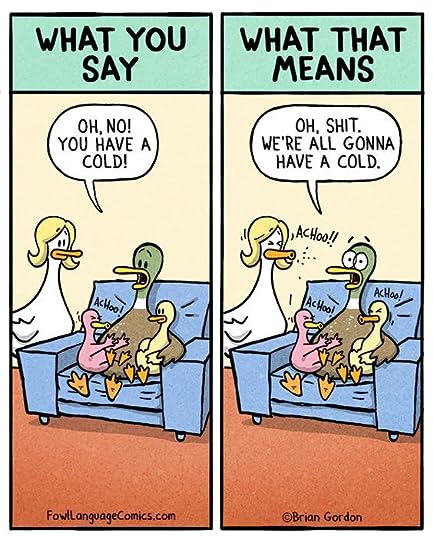 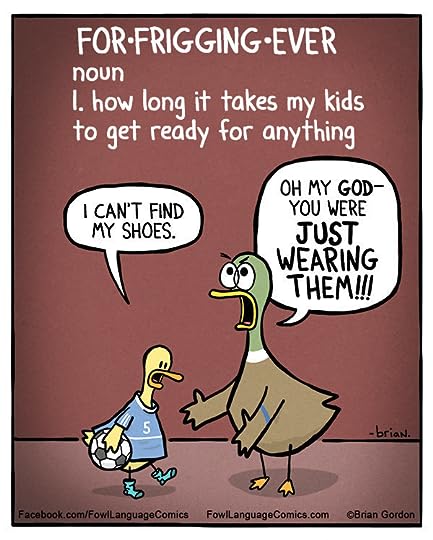 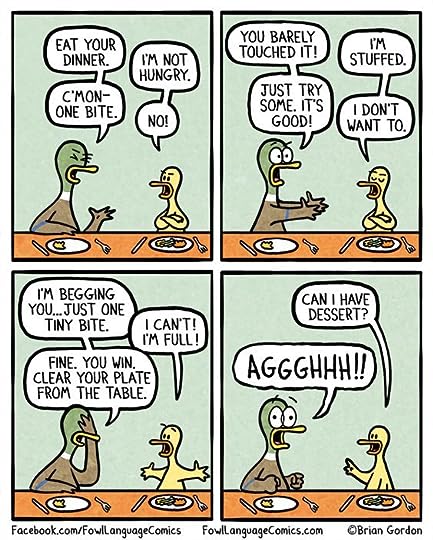 I have the paperback version. I think I'm going to lend this one to certain someones ;) .

This had some illustrations that made me chuckle, it would make a nice present to parents to be.

**Disclaimer: I received a copy of this book from Netgalley, in exchange for an honest review. 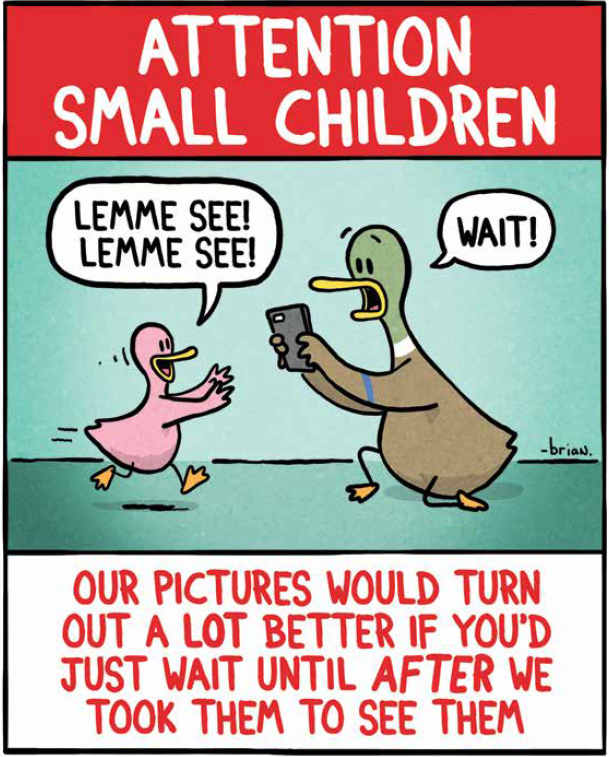 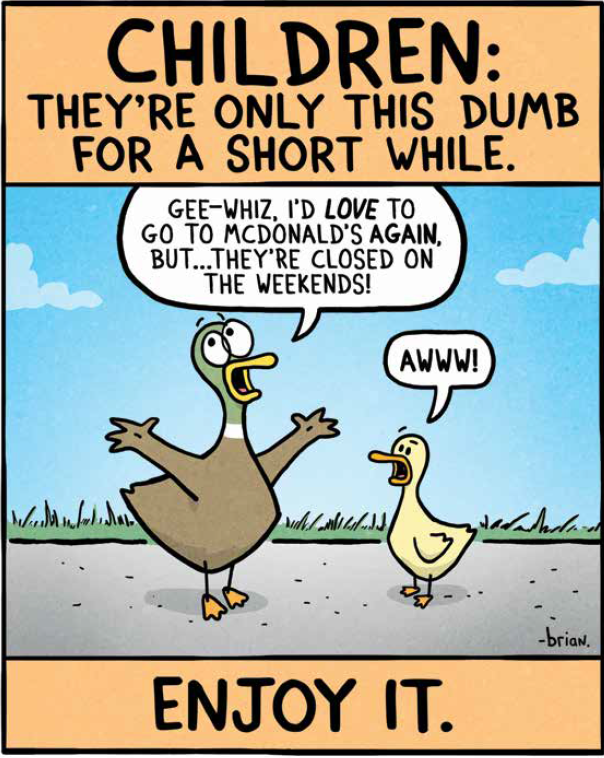 This review can also be found at Carole's Random Life. 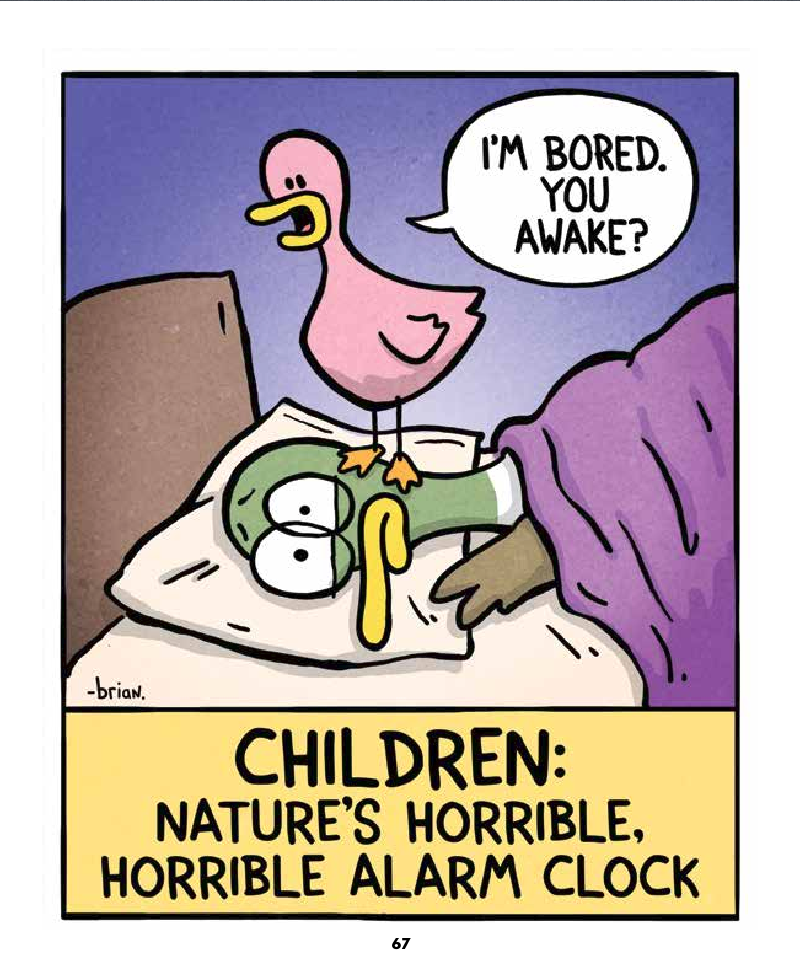 I have seen these comics floating around the internet and have enjoyed them. When I saw that there was a whole book of this comic, I knew that I had to take a look. A lot of the comics featured in this book were the same ones that I had seen online but I thought that this was such a fun little book of comics. 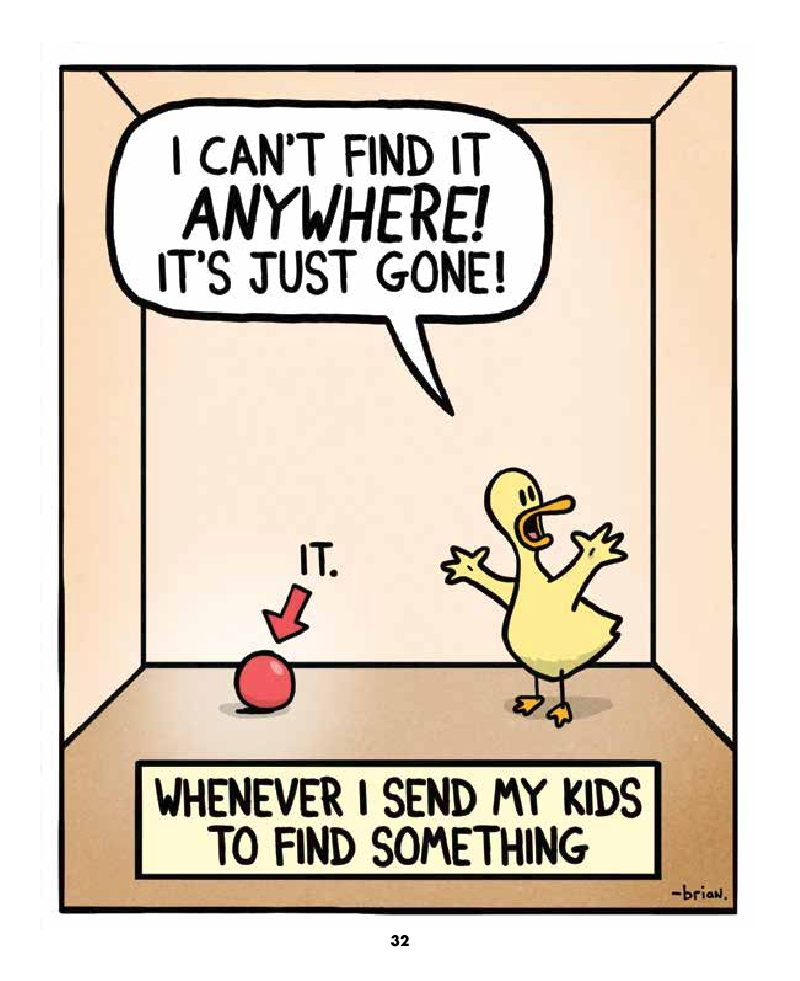 The thing that I love about this comic is that not only are they funny, they are easy to relate to. I have kids and I could see myself on just about every single page in this book. My youngest is in high school so I am at the point in my life where I am not dealing with some of these issues anymore but I will never forget what it was like when they were younger. Don't get me wrong - My children are still frustrating but in different ways now that they are older. 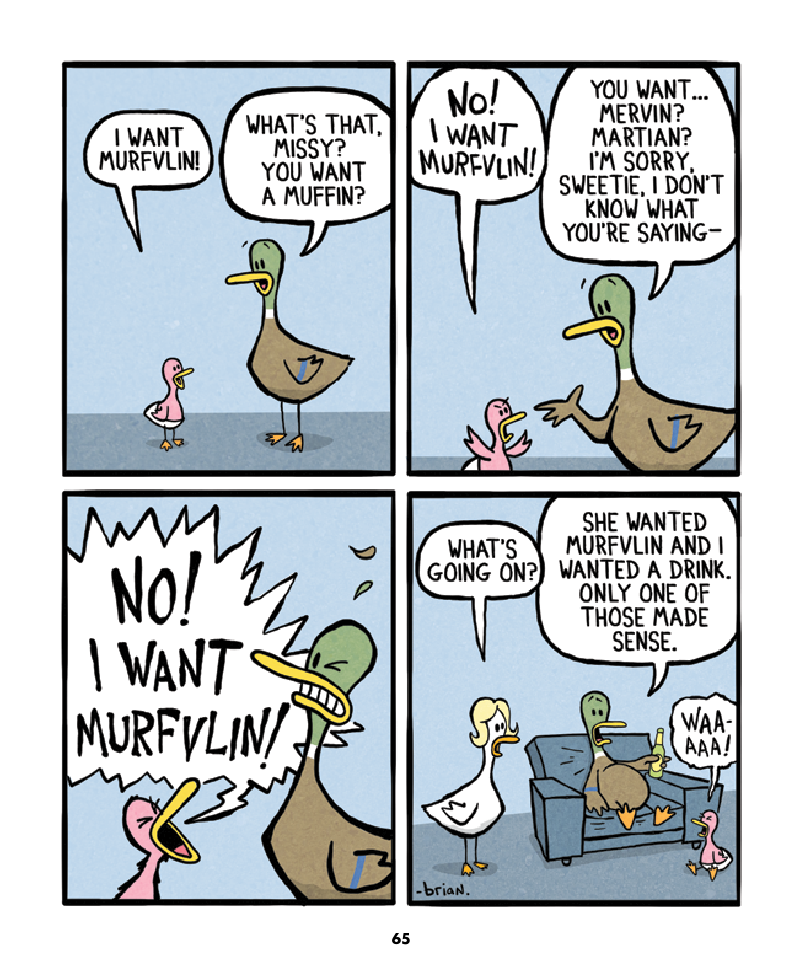 I highly recommend this book to all parents or really anyone who has spent a lot of time with young kids. I think that this book would be a wonderful gift for parents of toddlers who probably need a good laugh. I will definitely be on the look out for future installments of this comic strip. 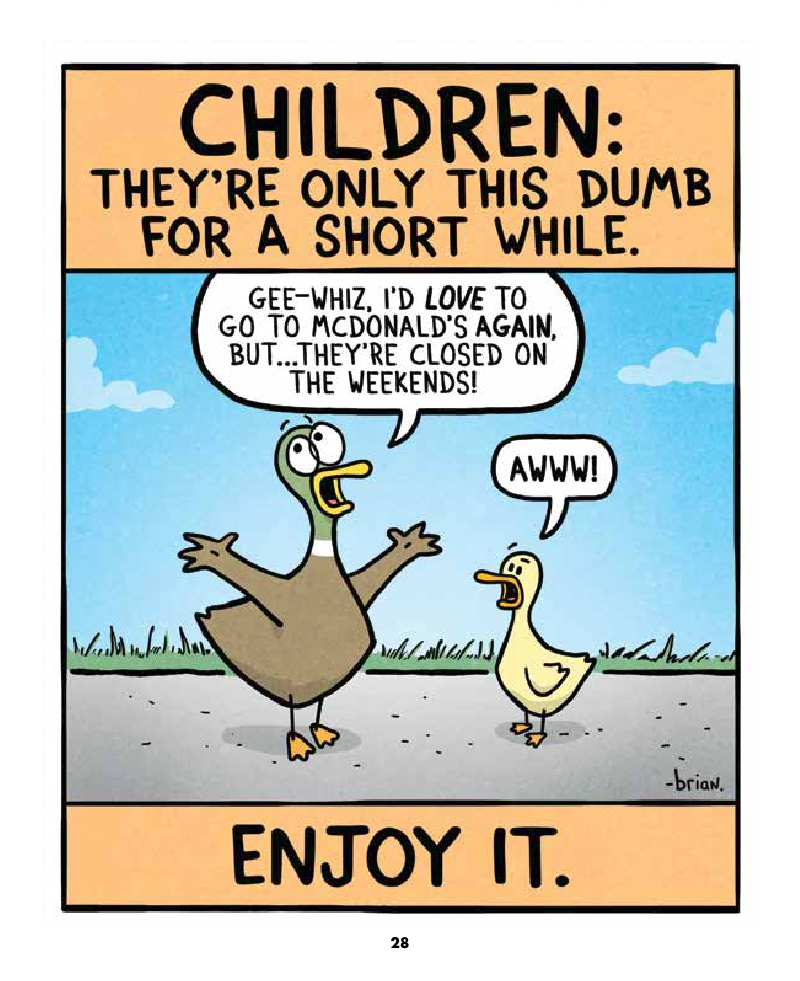 I received an advanced reader copy of this book from Andrews McMeel Publishing via NetGalley for the purpose of providing an honest review. 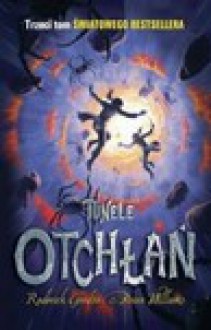