Log in with Facebook
or
Wrong email address or username
Sign up
Already on BookLikes? Log in!
Incorrect verification code
Please, check your email, the code to access your BookLikes blog was sent to you already.
Enter code:
« Back Send
back to top
Search tags: brilliant 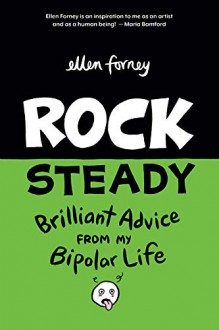 Forney was diagnosed with bipolar disorder in 1998. It took her years to get stable, but she managed it. After she published Marbles: Mania, Depression, Michelangelo, & Me (which I haven't read), comments from readers inspired her to write this book.

I requested this in order to read up on mental health-related graphic novels for work. This was much more text-heavy than I expected - not so much fun to read cover-to-cover, which I needed to do fairly quickly in order to finish it in time to write up some impressions for coworkers. But I'll admit that I got through it more quickly and easily than I probably would have if it had been a more traditional self-help book. The large comic-style text and illustrations were appealing and usually easy to follow.

Forney covered lots of topics: different therapy options, coping tools, dealing with insomnia (or the opposite, hypersomnia), dealing with meds (tips for remembering to take them, traveling with meds, side effects), identifying your warning signs, and the importance of setting up a support system and ways to do it. Although her advice was geared towards folks with bipolar disorder, those with other mood disorders or anxiety could probably also find useful information. As someone who, only this afternoon, had to deal with an anxiety-induced panic attack, I can confidently say that Forney's "put your face in a tub of ice water" trick actually does help.

Some of the advice Forney covered was the same stuff I've seen in other self-help books for depression, anxiety, etc., but she occasionally put a twist on some of it that I hadn't seen before and liked. For example, there are a lot of people who say "be kind to yourself, you wouldn't say that to someone you loved, right?" Which is all well and good but doesn't really make it easier to not beat yourself up over stuff. Forney had similar advice, but instead of just saying "you wouldn't say that to someone you loved," she presented a visualization exercise in which you imagine saying that to a child version of yourself, then imagine what you'd do if someone you loved did the same thing you were berating yourself about, then imagine treating your child self like you would someone you loved, and then finally treat yourself like that. Not a thing I've tried yet, but I really liked that page.

Like so many other self-help books, Forney also brought up meditation. One twist that she added that I liked was making walking meditation less boring by turning it into a story she actually wanted to participate in. She'd imagine that aliens had contacted her and told her that the area she was in was going to be destroyed. They had turned her whole body into a recording device, and they needed her to record as much as she could, with as many of her senses as she could. She had to be as much in the moment as possible, because any thoughts would disrupt the recording.

All in all, this was a good self-help book that was more text-heavy than I expected it to be, but still a quick read. I apparently read it at just the right time, too - I'm very grateful for that ice water trick.

Overall, this was good - lots of information and advice for folks dealing with bipolar disorder or other mood disorders. It'll probably end up on our list of purchases if we can get that grant.

Another entry in my "dipping my toes into mental health graphic novels" work project. This is very text heavy and not really all that fun to read cover-to-cover, but it does have a lot of helpful advice. And not just for folks with bipolar disorder! I plan on recommending the chapter on taking your meds (techniques for remembering to do it, traveling with meds, etc.) to a friend who's been taking meds for depression for a while and struggles with remembering to take them all. The advice might be stuff she's already tried, but there might still be some helpful tidbits.

The page on being kind to yourself was nice - not just "would you say those things to someone you love?" but rather a whole progression of "imagine saying these things to __" before eventually bringing the responses back around to yourself in that moment. I also liked Forney's modification of walking meditation, turning the experience into a story she found herself wanting to participate in (Basically: "Imagine that aliens have learned that this area will be destroyed soon and have contacted you to use your whole body - all your senses - as a recording device. Any thoughts you have disrupt that recording, so you need to try to just experience your surroundings."). And oof, as someone who has spent the past week struggling against anxiety-induced insomnia, I felt the section on insomnia in my bones. 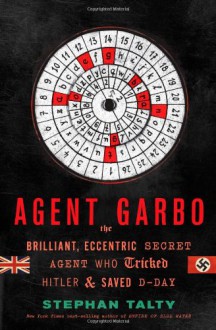 Talty's book about Garbro - in reality a Spanish man, Juan Pujol Garica who sided with the UK during the Second World War - is a good biography about a mystery man. Talty presents him warts and all. Considering how in some biographies about famous men, the wives are depicted either as knowing and forgiving suffering saints, or totally at fault, Talty is understanding to Garica's first wife Araceli, in particular when detailing the family's experiences in London.

A Brilliant Rose is another outstanding historical romance by Bree Wolf.  The more I read from this talented author, the more I want to read.  Ms. Wolf has produced a well-written book.  The characters are phenomenal.

Charles can't stand in the way when his new wife and identical twin brother fall in love when they meet.  Charles and his brother switch identities and leave Charles alone with the reputation of a rake.  Rose is bookish and meets Charles at the British Museum, when she hears his name and recognizes him as the man that ruined her cousin she wants nothing to do with him.  Charles and Rose's story is full of drama, humor and misunderstandings.  I enjoyed reading A Brilliant Rose and look forward to reading more from Bree Wolf soon.  A Brilliant Rose is book 2 of A Forbidden Love Novella Series but can be read as a standalone.  This is a complete book, not a cliff-hanger.