Log in with Facebook
or
Wrong email address or username
Sign up
Already on BookLikes? Log in!
Incorrect verification code
Please, check your email, the code to access your BookLikes blog was sent to you already.
Enter code:
« Back Send
back to top
Search tags: colleenhoover 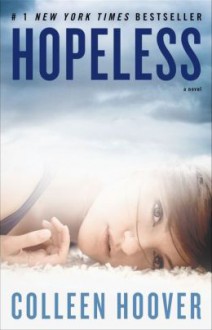 Seventeen year old Sky has been home-schooled and kept away from technology for her entire life. Her only real connection to the outside world is her best friend and neighbor for almost her entire life, Six. Together, they convince Sky's mother to let her attend public school for her senior year when Six travels out of the country. Left to find a guide to a new world, Sky runs into more trouble than she can handle.

"My lack of access to the real world has been replaced completely by books, and it can't be healthy to live in a land of happily ever after."

Our MC (main character) is (for the most part) your average contemporary female character. She's lonely,mostly friendless,and lives in a world in which she doesn't understand. This is why it made little sense to me as to how she had all these boys constantly at her house. Uhmmm?

I understand that she lived under a very strict roof, but what in the world possessed her to break her mother's rules so crazily? So many things could have gone wrong. She could have been raped or murdered because she barely knew the boys sneaking into her house! Her friend attends school and could have easily invited her to hang out with those boys, but instead they made poor decisions.

Speaking of poor decisions, can we talk about Dean? I immediately thought of Supernatural. Can you imagine teenage Jensen Ackles? From the moment he met Sky, he was creepy. Following-you-to-your-car creepy. And he happened to live near her most of their lives and they never met...except for that ONE time she went running that far? Mhm, very likely.

For the most part, I DID like Dean. I enjoyed how you would never know what he was thinking or what he was doing when he wasn't with our MC. He opened this huge bag of curiosity I had inside of me and I feel that was never satisfied. He told Sky that there were things to him that she didn't need to know, couldn't know. Even with this dramatic backstory, I feel I still know nothing about him besides the fact that he has anger issues and stalker tendencies. I WILL,however, give him credit for sticking up for Sky and telling her the truth when she asked.

Overall, this book was nothing special. I wish there were more flashbacks and the backstory was set up better. It was rushed [spoiler]and the murder that later took place would have been tested for evidence...I mean come on. HE WAS A POLICE OFFICER. [/spoiler] I'm tempted to pick up the companion novel to see what else I can get out of this. All in all, if you are reading Colleen Hoover for the first time, I suggest reading Maybe Someday.