Log in with Facebook
or
Wrong email address or username
Sign up
Already on BookLikes? Log in!
Incorrect verification code
Please, check your email, the code to access your BookLikes blog was sent to you already.
Enter code:
« Back Send
back to top
Search tags: conference 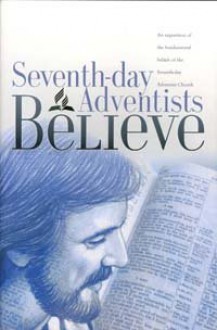 The Seventh-day Adventist Church has traditionally shied away from formulating creeds for a variety of reasons.  Yet, even from its founding the church has had to release answers to doctrinal questions or to challenge false statements about what its actual beliefs were.  At the 1980 General Conference session, the church decided on a statement of 27 Fundamental Beliefs that described the church’s official positions, but were not criteria for membership.  An additional Belief was added at the 2005 General Conference session, just like after 1980 the General Conference expanded upon the statements in Seventh-day Adventists Believe: A Biblical Exposition of Fundamental Doctrines.

As stated in the subtitle states, the 28 Fundamental Beliefs are based on and explained through numerous passages in the Bible.  In fact, the Fundamental Belief “Holy Scripture” begins the book and is the basis for the rest of the book.  The 28 Beliefs are grouped into 6 doctrines: God, Humanity, Salvation, The Church, Christian Life, and The Restoration; with each Belief and doctrinal group leading into one another.  With this structure, the reader is given better understanding to Seventh-day Adventist theology.

Seventh-day Adventists Believe services a dual purpose of helping Adventists--both longtime and new--learn about their beliefs better and to answer questions as well as misconceptions from non-Adventists.  Amongst the questions answered are the Trinity, sola scriptura, and the experience of salvation.  Also answered are those beliefs that are seemingly unique to Adventism: the Seventh-day Sabbath, the Great Controversy, Jesus’ work in the Heavenly Sanctuary, and the Gift of Prophecy amongst others.

If you have ever wondered what Seventh-day Adventists really believe then this book is highly recommended to answer your questions.