Log in with Facebook
or
Wrong email address or username
Sign up
Already on BookLikes? Log in!
Incorrect verification code
Please, check your email, the code to access your BookLikes blog was sent to you already.
Enter code:
« Back Send
back to top
Search tags: damn-u-Sparks Opening Line: "Why had this happened? Why, of all the children was Kyle the one?"

I first read THE RESCUE in 2003 and enjoyed it just as much with it's rediscovery. As soon as I opened the first page I was lost, reading continuously for the next 24 hours. Thinking to myself, damn that Nicholas Sparks' he's done it again, sucking me right back into one of the best love stories I've ever read.

Due to a horrific childhood trauma volunteer firefighter Taylor McAden is driven to take disturbing heroic risks while on the job, trying to somehow put his world right. He has few friends and all of his past relationships have resulted from rescuing troubled women in one way or another. All of whom he inevitably leaves as soon as they want more from him then he can give. It seems that there's just one leap Taylor can't make; that of allowing himself to fall in love. 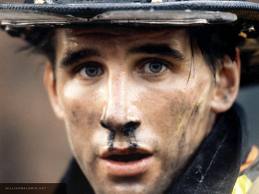 Denise Holden is a single mother of a handicapped child. Due to a lack of finances she has been forced to move back to her mother's hometown and live in the inherited home. At the moment she's barely scraping by, her son Kyle taking up most of her time, energy and resources. Love is the last thing on Denise's mind as she drives home from her job at the local diner. As fate would have it though a terrible storm hit's the small southern town that night, contriving to bring our couple together. As the storm rages Denise crashes her car and upon regaining consciousness finds herself staring into the handsome face of risk taker extraordinaire Taylor. Before she can acknowledge him as her potential life partner though panic takes over as she realizes that her son is no longer in the car and is feared to be lost in the nearby swamp. 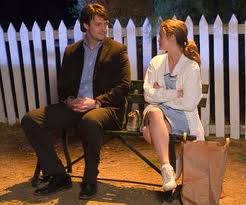 I won't be giving anything away by telling you that Taylor rescues both Denise and her son and together they forge into a relationship. But as wonderful as the relationship seems in the beginning it doesn't take long for the cracks to show and the harder Denise tries to help Taylor the more he pulls away. Shutting down emotionally and taking greater and greater risks with the fire department (For a small town they sure have a lot of fires.) 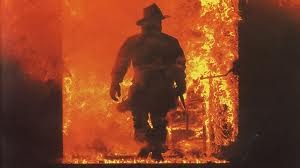 As with every Nicholas Sparks' novel we are never guaranteed a HEA which aids in a degree of tension throughout this story. For me the relationship and its sudden decline is so well written that it seemed a page from my own past, tugging at my heart with its familiarity. Taylor is a mystery throughout and the whys of this aren't revealed until the very end. THE RESCUE contains some fabulous secondary characters and you will fall in love with every one of them. It's also full of action, suspense and melodrama. There were a couple of moments when I actually gasped, unable to believe what I'd just read. Have some Kleenex handy, this is great yet as always with Sparks bittersweet love story. Cheers! Opening Line:”For Dawson Cole, the hallucinations began after the explosion on the platform, on the day he should have died.”

By now I’ve read enough Nicholas Sparks to know going in that I’m not always going to be guaranteed a HEA. In fact half of the suspense for me in reading his stuff now is that I’m not sure who he’s going to kill off. Sure it’s also frustrating as hell, because I always forget and then just when I’m all invested in the characters and wrapped up in their budding romance, blam. Tragedy strikes. Yeah, more than once I’ve thrown one of his books across the room in disgust but I still keep coming back for more. Damn you Sparks. This was another good NS book which (as always) sucked me right in. I’ll be honest though there’s nothing particularly new here and even if Sparks’ name weren’t splashed all over the cover, there’d still be no mistaking who wrote it. The Best Of Me reads like bits and pieces of all his other books with; unrequited love, reunited lovers, Notebook-esque flashbacks with an older couple, moral dilemmas, a bit of spirituality, a tortured hero, unscrupulous bad guys and a predictable yet nail-biting ending while you await the outcome of (in this case) a shooting. Yet somehow all that’s ok because when something works for you and the reader why change it?

Amanda Collier and Dawson Cole were teenage sweethearts in 1984 small town North Carolina; from opposite sides of the tracks, their intense and beautiful romance didn’t really stand a chance. You see the Coles are hard drinking, woman beating, law breaking, drug dealing, bad boys and Amanda’s folks are church going, stand up citizens. Despite the odds, or maybe because of they manage to find each other and fall in love, spending considerable time at old man Tuck’s garage where Dawson works. I really enjoyed their teenage romance which is told here through flashbacks from both sides of the pair who are now in their forties.

Dawson is another quiet, somewhat tortured hero of Sparks’ who you can’t help but fall for. (I’m hoping to see Channing Tatum in the probable movie version) He works on the oil rigs, has spent time in prison and almost his entire life running from his messed up family and their reputation. Oh and he’s also never gotten over his one true love Amanda.

When their old friend and mentor Tuck dies the pair are reunited in their hometown for the funeral. The grumpy yet crafty old man has left explicit instructions as to how his final wishes are to be carried out, including a trip to his cabin and some personal letters. As expected the years apart haven’t diminished what Dawson and Amanda feel for each other despite the fact that Amanda now has a husband and children. Throughout their reunion we have some bad guys gunning for Dawson, a ghostly/angel figure following him and adding intrigue as we don’t learn the whys for a long time, and a bad marriage that may or may not be worth saving.

There are actually are quite a few characters involved here and Sparks has again written this using multiple POV’s which as the suspense factor increases get shorter and shorter, so that towards the end you’re only getting about a paragraph from each character. I found that this increased the tension level while he wove all the storylines together and left this reader on pins guessing the outcome. Damn you Sparks. 358jb4 Opening Line: My name is John Tyree. I was born in 1977, and I grew up in Wilmington, North Carolina..."

You can always tell you're reading a great book when you find yourself skipping ahead into the final chapters to see how things will be resolved, even though you've vowed you wouldn't. Love doesn't always have a happy ending (especially when it comes to a Nicholas Sparks novel) and this is a wonderful, albeit tear-jerking romance. 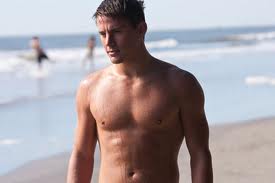 Our hero John grew up with a silent, meticulously organized father that he didn't understand. In his teens he began to rebel, hanging out, playing pool and drinking. This continues for a number of years with John working menial jobs, getting several tattoos and going nowhere fast. Eventually John decides its time to grow up and he joins the army. In fact it's during 2 weeks leave that he first meets Savannah, diving into the ocean to rescue her sinking purse. Savannah is your stereotypical good-girl; raised in a stable family she's kind, pretty and hopes to save the world. It's also love at first sight for our couple despite the warnings from her tattoo phobic college friends. Together the pair plans a future together, counting down the days until John's discharge as Savannah helps him understand his father and he in turn feels contentment for the first time in his life.

On Sept 11 everything changes as John in a moment of patriotic loyalty chooses to re-up in the army, putting a hold on their marriage plans while he enters the war in Iraq. The two try to maintain a long distance relationship but the war changes John and the years apart put a strain on their deep love. When John's father grows ill he returns home but will he be too late to save both his relationship with his father and the love of his life?

I fell in love with John's character and surprisingly his father too. Each is well written and they felt like real people. I also enjoyed reading about John's military career and the reasons that take men into a war. Savannah as the heroine was a little too perfect for me but their heartbreaking love story and the regret that they both share will keep you up into the wee hours, and leave you wondering about John long after you've finished reading its bittersweet ending.

Another great read from Nicholas Sparks that I would definitely recommend. Oh, and John if you're out there, I'm single...