Log in with Facebook
or
Wrong email address or username
Sign up
Already on BookLikes? Log in!
Incorrect verification code
Please, check your email, the code to access your BookLikes blog was sent to you already.
Enter code:
« Back Send
back to top
Search tags: dimon 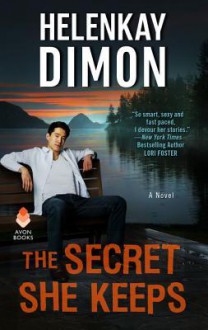 Maddie has been on Whitaker Island ever since she got out of the witness protection program for the last two years. She still keeps to herself and is barely known by most of the island members.
Like his brother before him, Connor is on forced vacation and decides to stay on Whitaker and in the cabin his brother has just vacated.
Maggie isn't sure about Connor but there is something that draws her to him and their “meet-cute” ends up having her bake him a pie in apology.
Whitaker Island is about to provide mystery, murder, and falling in love all over again.

She’d been terrified and in hiding for most of the last two years.

Second in the Whitaker Island series, you could comfortably start here as the story deals with a new murder mystery. Book one introduced readers to Maggie, one of the island's hermits who answers phones for the police department and Connor, brother to book one's hero. Why Maggie is so afraid of strangers and likes to keep herself isolated is doled out throughout the story. Reader's know she was in witness protection but it's about in the middle that we learn why and then more towards the end that the root of her emotional pain is revealed and explained.

If you read book one, you'll know about Connor's sister's murder, there is enough rehashing and from Connor's perspective to give a clear picture of what happened. The author did a good job of portraying how Connor's guilt has affected him and it is clear how his budding relationship with Maggie is/could be affected. This part of Connor's emotional journey isn't dealt with until the very end, even after the mystery part had been resolved, so it gave the story a little bit of a backwards feel. If Connor had dealt with these emotions earlier, I could have believed in their relationship more, as it was, I did wonder if he was just with Maggie to protect her because he couldn't protect his sister.

Get rid of him or I will

The mystery part didn't capture my attention, the mysterious notes Maggie gets set a good thriller, creepy vibe but when Connor and her find a dead body, it felt like taking a very similar track from the first book. We get a couple povs from the villain but their identity was pretty obvious from the start. I also thought Connor's involvement was a stretch, he barely knew Maggie but he (an engineer/businessman) thought he should be involved and keep her under is protection; it didn't flow right for me. The villain and their motivations I could go along with but some aspects and characters brought in from Maddie's reason for being in witness protection didn't feel tightened up enough, especially a red-herring thrown in that felt more like a brick than a swoosh shot.

“Don’t let vacation Connor fool you. I fight pretty hard for what I want.”

The mystery didn't really interest me and their romance lacked spark, their sex scenes didn't have me feeling their lust or love. The strong part of this story was the continuation of the setting, Whitaker Island and the secondary characters. Ben, the island sheriff, brightened up the pages when he was on them, along with a couple other island residents. The question continued from the first of who owns the island is revealed here and looks like it could provide for a third in the series.

The mystery started off thriller but petered out with an easy to guess villain and some sluggish reveal of Maggie's background. Connor and Maggie moved fairly immediately to togetherness but their relationship felt lifeless to me. I've read Dimon before and enjoyed her books, I'll read her again and hope this was a one off.

(Bonus to me for the food matching the cover :)

The Secret She Keeps by HelenKay Dimon purchase link

I cooked my quinoa in apple juice, almost made it too sweet, used red apples, and really enjoyed 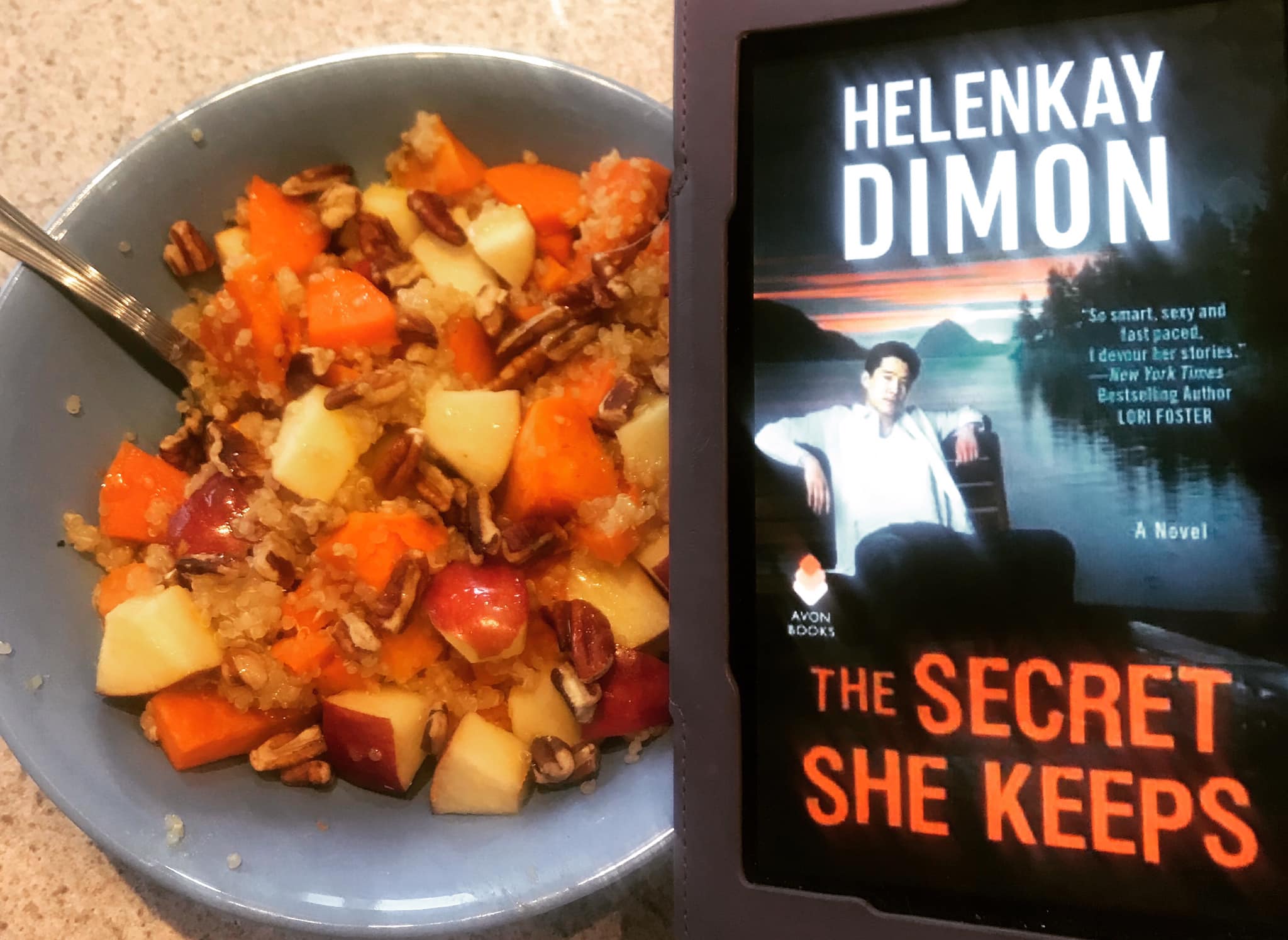 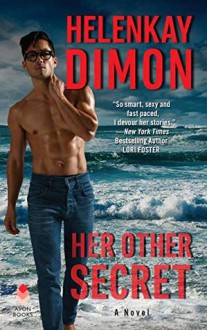 “Everyone around here really does have a secret, don’t they?”

A small island off the coast of Washington with only a little over two hundred residents, Whitaker has become an unofficial destination for people looking to escape into obscurity. Hansen Rye is taking a breather from his high pressured life and turmoil resulting from his sister Alexis' death. He's strengthened his even usual grumpy personality and tried to become even more walled off but has still become friends with Ben, local head of police, and Tessa Jenkins, the woman he is currently trying to not fall for.

Tessa is hiding out in Whitaker, trying to lay low from her own family drama but can't help teasing the impromptu handyman, Hansen. His grumpy demeanor gives way to can't help but fix things for local residents and the look in his eyes when he's staring at her, draws her back for more.

“Not you.” He shrugged. Even took a step back. Generally looked uncomfortable in his skin, which never happened. “You, I like.”

She almost spit out a mouthful of coffee. “Since when?”

“Let’s say you’re growing on me.” He sighed and crossed his arms. Then uncrossed them again.

Her Other Secret was a mixture of mystery, thriller, romance, and ending suspense. When the reader comes into the story, Hansen and Tessa already have a friendship established and are just trying to not act on sexual feelings. I missed seeing their initial draw and spark, it feels like we missed out on some great teasing and poking of the bear (Hansen) by Tessa to break down his walls. Their chemistry and back and forth was good, the word love was brought up far too quickly for the lack of building blocks I was getting from them emotionally, some sex scenes felt a bit out of place, and while they had good friendship chemistry, they didn't heat up the pages as much as I would have liked. The majority of the story focuses more on the murder mystery and as such, the romance plot suffered some.

All Hansen knew was that his past had caught up with him in the worst possible way.

This was more mystery/thriller than romantic suspense to me, the pace of the characters investigating is slower as the reader's mind is supposed to be racing as to who is involved, why, and for what purposes. There is a locked room mystery feel to it with the setting being an island currently experiencing storms that is keeping residents from getting off the island or on. The connection of the murder victim to Hansen was intriguing and kept the high stakes feel alive but some of the key players felt removed from the story. Hansen's family is discussed and his close relationship with his brother, but we never meet them and for the murder victim playing such a key role, we never got a pov or scene with them before they died. The villain/s also had a removed feeling to them, their wrap-up and reveal didn't quite have a big impact or feel like a rewarding payoff. The last twenty percent had more of the romantic suspense feel but the change of pace gave the ending more of a rushed feel than crescendo conclusion as characters were found out or cleared.

The author has definitely created a place rife with intrigue but I felt a bit lost at times, how we're just supposed to go along with how Whitaker is both a known place to disappear on and yet you can disappear on it. If this is indeed a start to a series, the structure of the island, how the island is owned by a mysterious rich person but gives the running of it over to a board, and some short but poignant introductions to some characters encumbered this story at times but it would make sense as laying groundwork for a series.

There was some missing character development, Hansen and Ben had a enjoyable relationship but would have liked to have seen how it started, same with Hansen and Tessa's friendship that their chemistry eventually dictated had to be more. I also thought Tessa's secret, that we don't get let in on until around the sixty percent mark, felt somewhat tagged on; not enough time to gain an emotional footing and a resolution that felt partially empty. The word love was used too quickly but Dimon always writes couples that have believable connections and are compelling in any small way to read about. I think I caught a hint of something possibly brewing between our local PD Ben and the extremely mysterious woman named Maddie who answers the department phones remotely. Whitaker seems like it has residents with stories to tell and I'm curious enough to show up if there are more books to come.

She didn’t believe a woman needed a formal partner to feel whole. She’d seen her mother thrive and love without ever walking down the aisle. But the idea of sharing the burden, having someone to help her fight in situations like this . . . The way he kissed her, touched her. The smile he saved only for her. Yeah, love.

“So then . . .” But she couldn’t finish. She knew and dreaded him confirming her suspicions. “There’s someone else out there.”

This is less rom suspense and turning out to be more locked door (island) mystery. Usually I'm a nosy reader but I'm kind of enjoying the methodical relying of information to keep my mind working. I do wish we knew a little more about some of the island residents for more red-herrings, right now the mystery feels like it stems from off the island which dulls some of the thrills and chills.

Heroine looking for sanctuary, a handyman hero with secrets, and a killer on the loose

Excited to start this!

Her Other Secret by HelenKay Dimon purchase link (Jun 25)

These were super messy to eat by the pineapple combined with other flavors was tasty. We had leftovers and instead of making them lettuce wraps again we cheated and used taco shells, lol. 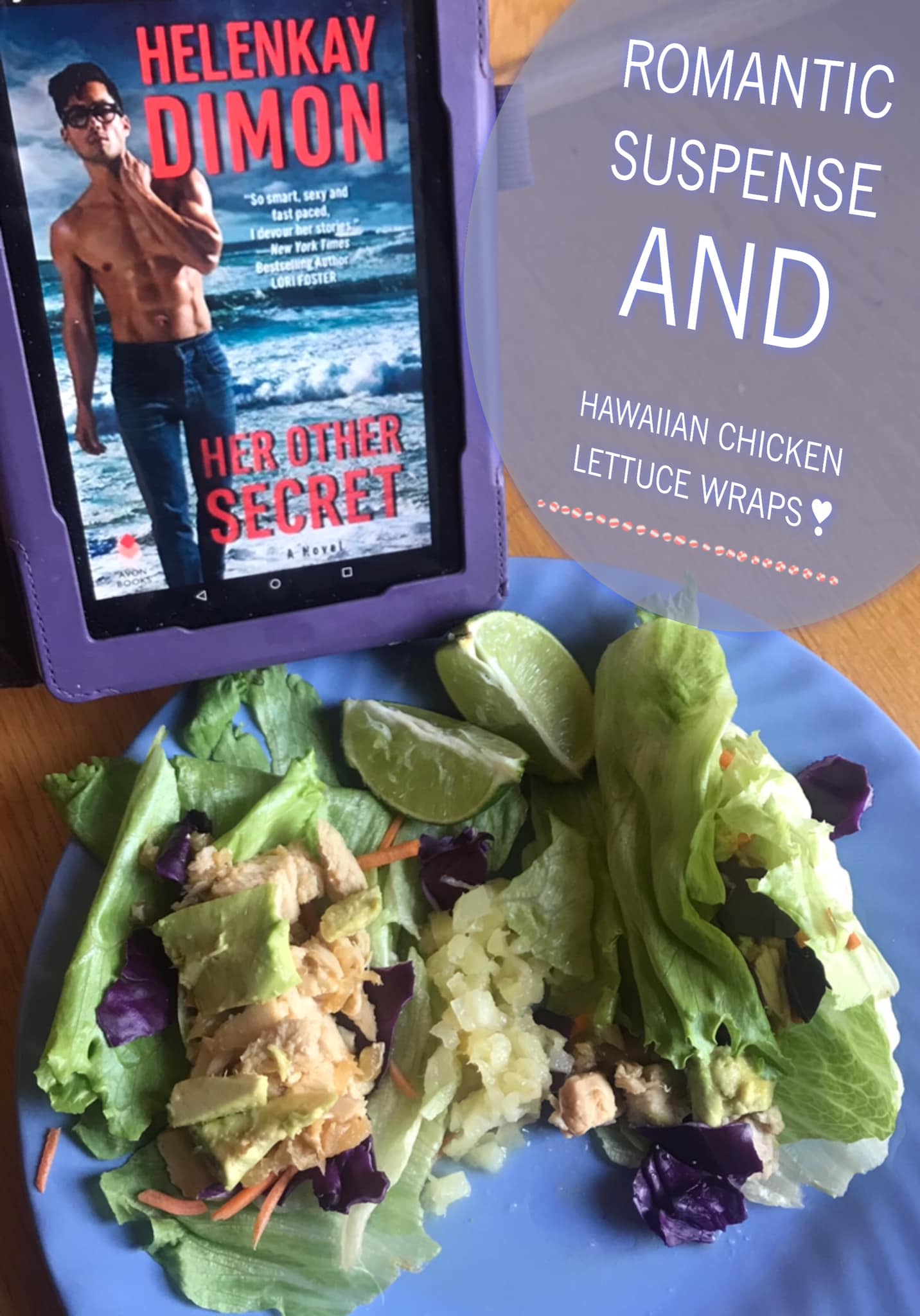