Log in with Facebook
or
Wrong email address or username
Sign up
Already on BookLikes? Log in!
Incorrect verification code
Please, check your email, the code to access your BookLikes blog was sent to you already.
Enter code:
« Back Send
back to top
Search tags: dinosaur-fiction 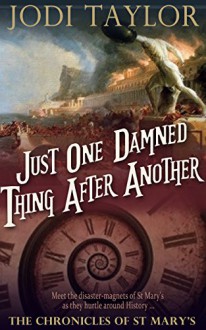 Behind the seemingly innocuous façade of St Mary's, a different kind of historical research is taking place. They don't do 'time-travel' - they 'investigate major historical events in contemporary time'. Maintaining the appearance of harmless eccentrics is not always within their power - especially given their propensity for causing loud explosions when things get too quiet.

Meet the disaster-magnets of St Mary's Institute of Historical Research as they ricochet around History. Their aim is to observe and document - to try and find the answers to many of History's unanswered questions...and not to die in the process. But one wrong move and History will fight back - to the death. And, as they soon discover - it's not just History they're fighting.

Follow the catastrophe curve from 11th-century London to World War I, and from the Cretaceous Period to the destruction of the Great Library at Alexandria. For wherever Historians go, chaos is sure to follow in their wake....

This is the most enjoyable time-travel romp that I’ve ever read! I had great fun following the boisterous and sometimes explosive adventures of Madeleine Maxwell, as she joins the St. Mary’s Institute of Historical Research. The book ends up being something that is hard to categorize, although I’m pretty sure that stores will stick it firmly on the Fantasy shelf. But there is mystery, intrigue, romance—you name the genre.

I am always delighted with fiction that includes dinosaurs, so the time travel to the Cretaceous was absolutely perfect for my tastes. As Miss Maxwell says, “You put dinosaurs and people together, you always get screaming.” Apparently she has seen at least one of the Jurassic Park movies!

I chose this as my time travel selection for my 2018 PopSugar challenge, but I will definitely be continuing on with the series. I love the patchwork of genres, the British sense of humour, and the adventure. 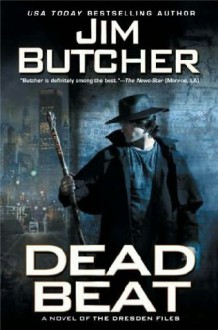 Paranormal investigations are Harry Dresden’s business and Chicago is his beat, as he tries to bring law and order to a world of wizards and monsters that exists alongside everyday life. And though most inhabitants of the Windy City don’t believe in magic, the Special Investigations Department of the Chicago PD knows better.

Karrin Murphy is the head of S. I. and Harry’s good friend. So when a killer vampire threatens to destroy Murphy’s reputation unless Harry does her bidding, he has no choice. The vampire wants the Word of Kemmler (whatever that is) and all the power that comes with it. Now, Harry is in a race against time—and six merciless necromancers—to find the Word before Chicago experiences a Halloween night to wake the dead...

Best Dresden book so far!  I approve of the zombie T. rex Sue and all the mayhem that she causes!

Harry, like any good noir detective, is a bit soft-headed when it comes to a dame.  This gets him in trouble in every book and this one is no exception.  His wry sense of humour helps him deal with the situations that his instinctive responses get him embroiled in.

At least in this installment, Harry gets to know members of the White Council better (and vice versa), finds out that he has fans among the younger wizards, and gets to communicate with an important person from his past.

He also becomes a personal coach for a new friend, Butters.  Polka will never die!! 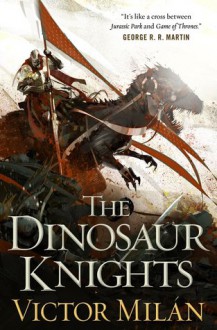 Paradise is a sprawling, diverse, often cruel world. There are humans on Paradise but dinosaurs predominate: wildlife, monsters, beasts of burden, and of war. Armored knights ride dinosaurs to battle legions of war-trained Triceratops and their upstart peasant crews.

Karyl Bogomirsky is one such knight who has chosen to rally those who seek a way from the path of war and madness. The fact that the Empire has announced a religious crusade against this peaceful kingdom, the people who just wish to live in peace anathema, and they all are to be converted or destroyed doesn't help him one bit.

Things really turn to mud when the dreaded Grey Angels, fabled ancient weapons of the Gods who created Paradise in the first place come on the scene after almost a millennia. Everyone thought that they were fables used to scare children. They are very much real.

And they have come to rid the world of sin...including all the humans who manifest those vices.

I enjoyed the first volume, The Dinosaur Lords, but the second volume The Dinosaur Knights is better. The world is already established, the reader knows the main characters, and the action is already underway. The dinosaurs continue to be awesome and the “rules” of their behaviour in Paradise (our non-Earth setting) are refined a bit. Now it is clear to me why the Tyrannosaurs don’t run amok. What is less clear (and may be fodder for future installments) is who exactly the Creators are and what their aims may be.

There are an awful lot of gritty battle scenes in both books, which generally are not my thing. However, to counter-act that, we have Imperial Princess Melodía joining the rebels and learning to be something besides an imperial princess. This book continues to honour the Bechdel test, as Melodía discovers unexpected female friends along the way. My only reservation is that these amigas seem to be very expendable and Milan eliminates them almost as quickly as he introduces them and never gently. There are fewer sex scenes, which is a blessing, as I don’t care for Milan’s execution of them.

I think the trick to enjoying these books is to go into them with an open mind. Probably it helps for me that I have never read any of George R.R. Martin’s books, to which Milan’s books are compared, most notably on the dust jacket. Milan shares Martin’s willingness to dispose of characters, and a certain gritty, somewhat medieval-like setting. Empty yourself of any other expectations before entering the world of Paradise, and you will be free to enjoy what Milan is offering.

There are a certain number of editing errors which bugged me along the way (‘our’ instead of ‘your’ and similar little glitches that would require re-reading of sentences to figure out what was meant). But over all, these small snafus didn’t ruin the reading experience. 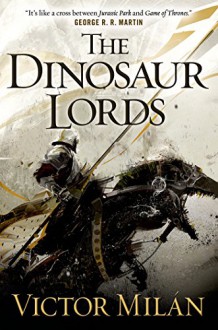 A world made by the Eight Creators on which to play out their games of passion and power, Paradise is a sprawling, diverse, often brutal place. Men and women live on Paradise as do dogs, cats, ferrets, goats, and horses. But dinosaurs predominate: wildlife, monsters, beasts of burden – and of war. Colossal planteaters like Brachiosaurus; terrifying meateaters like Allosaurus and the most feared of all, Tyrannosaurus rex. Giant lizards swim warm seas. Birds (some with teeth) share the sky with flying reptiles that range in size from batsized insectivores to majestic and deadly Dragons.

Thus we are plunged into Victor Milán's splendidly weird world of The Dinosaur Lords, a place that for all purposes mirrors 14th century Europe with its dynastic rivalries, religious wars, and byzantine politics…and the weapons of choice are dinosaurs. Where we have vast armies of dinosaur-mounted knights engaged in battle. And during the course of one of these epic battles, the enigmatic mercenary Dinosaur Lord Karyl Bogomirsky is defeated through betrayal and left for dead. He wakes, naked, wounded, partially amnesiac – and hunted. And embarks upon a journey that will shake his world.

Reasons to love The Dinosaur Lords:

1. DINOSAURS. Yup, they're part of everyday life on the planet of Paradise.
2. A chance to actually use that French/Spanish/Latin that you've studied in school.
3. All the fun stuff included in high fantasy epics--battles, personal vendettas, romances, escapes and captures, death, lies, and sometimes truths.

This novel owes a debt of gratitude to many that went before it. There is a nod to Anne McCaffrey’s Pern books (if you are present at the hatching of one of the large carnivorous dinosaurs, it will bond to you and you alone). The quotes from various texts at the beginning of each chapter were very reminiscent of Frank Herbert’s Dune series, although this world is much less complex. And there is a distinct Robin Hood vibe to the last chapters of the book wherein the Rob, the “Irish” bard, and Karyl Bogomirksy, the old campaigner, take a group of peasants and unwilling nobles and try to forge them into a fighting force to stand up to the Dinosaur Lords.

Still, I found some aspects of the book jarring. Every now and then, in a pseudo-Medieval setting, a blunt, modern term would slap me out of the narrative. Usually something just a bit too coarse for the rest of the writing. There was only one sex scene, which was described much more towards the porn end of the spectrum than I would have expected—if you haven’t seen your lover for months, there is urgency yes, but there is still affection and tenderness that was completely missing from this depiction. Unfortunately, there is a rape in the latter stages of the book and I found it more realistic than the supposedly loving sex.

However, this novel passes the Bechdel test with flying colours! There is a whole bevy of strong women who surround princess Melodía, who is herself seeking a way of making her life more meaningful. Instead of just letting life slip by in a series of pleasures and entertainments, these women are seeking to influence their society. They have sexual agency and a fair bit of freedom and are making the most of it. Bonus points!

I can definitely see where those who are not dinosaur aficionados would be somewhat confused (although that is what those chapter headings are there to help with) and if you resolutely resist using any language except English, you will encounter difficulties. Some interest in Medieval vocabulary is of utility to the reader as well (i.e. knowing that a sackbut is a trombone-like instrument and that Parasaurolophus had a long crest which presumably gave it’s call a trombone-like quality, hence calling this species of Hadrosaur a Sackbut).

I think every dinosaur lover has dreamt of being able to see these marvelous animals in the flesh (and not in Jurassic Park, either!); this book allows us to indulge this dream a bit. The dinosaur masters, who care for the war-dinosaurs, obviously love their charges and have fond relationships with them. I think many of us will insert ourselves imaginatively into that role!

I look forward to the second installment of the tale, The Dinosaur Knights.

My public library has ordered this!!!!

I am fifth in line when it is catalogued!  :)