Log in with Facebook
or
Wrong email address or username
Sign up
Already on BookLikes? Log in!
Incorrect verification code
Please, check your email, the code to access your BookLikes blog was sent to you already.
Enter code:
« Back Send
back to top
Search tags: don\'t-punish-yourself 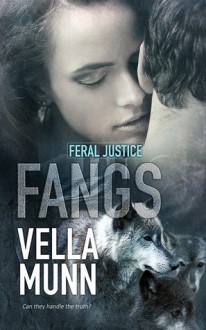 Three dogs search for animal abusers. Punishment is exacted. Life is simple—they do what the Force commands. It’s more complicated for the humans their existence impacts.
Three large gray dogs, ruled by a force only they comprehend, search for animal abusers. When they find them, punishment is meted out with fangs and claws. For the two brothers and their sister, life is simple—they do what the Force tells them to.
Life is much more complicated for the humans their existence impacts. Joe, a former POW, has loved the trio since they were helpless puppies. They make him feel part of something alive. His stepdaughter Rachelle longs to connect with the only father she has ever known, but, from the moment she sees the grays, she knows Joe has made a mistake by letting them run free.
Even though he believes the victims got what they deserved, animal control officer Nate must do everything he can to stop the man-killers. Rachelle and Nate should have very different goals, but life is never that simple.
* * *
As death and danger stalk the southern Oregon coast, Mia Sandas and Jeff Julian must trust each other. Can they handle the truth?
When a poacher leaves a wounded elk cow to suffer on the southern Oregon coast, Mia Sandas has no choice but to end its misery. Before she’s forced to do the same to the cow’s orphaned calf, a massive gray dog appears and snaps its neck.
Unknown to Mia, this is only the beginning of a test of her courage and comprehension. As she turns to Fish and Wildlife Officer Jeff Julian, the gray and his four-legged companions stalk local animal abusers.
Jeff and Mia are drawn together as they seek understanding of what is taking place in the forested mountains. They know the canines are committed to primitive justice but why? Who are the targets and what will be the outcome?
Can Jeff and Mia stop more bloodshed—and do they want to? Took it out of the library again.  I wondered if I'd like it more now that I have the background on Deadshot.

I didn't, really.  I don't like this run of Suicide Squad much.   It's all flash to distract from the fact that it doesn't have as much meat as the original run, did.  Also, Waller manages to be terrifying - but less terrifying than she originally was, too.

What is even going on, did I miss something? Because everything in this one seems to happen for no reason and without any explanation. Like I don't even know, I bought the volumes four and five because I had 1-3 but seriously, what is this even. My Batman-loving girlfriend* told me the New 52 sucked, and I didn't listen.   I saw these at the library, and thought, ooooh, DC's Lady Deadpool!   Even Harley didn't save these.

Better than the next reboot, but not by much.   It didn't help that the same character died in two volumes - which was explained later, but not very original by the second time it happened.

And Harley's initial meeting with the Joker wasn't consistent throughout these.

*I know people are wondering how I got into a super secret, super sapphic relationship with Troy.**   Well, he secretly is really in love with Wonder Woman.   So, y'know, that whole Amazon thing.

Convincing him I had a Lasso of Truth was the really hard part.   Don't ask.   You don't want to know. Oh,E.L James. When will the government stop your sinful hand?