Log in with Facebook
or
Wrong email address or username
Sign up
Already on BookLikes? Log in!
Incorrect verification code
Please, check your email, the code to access your BookLikes blog was sent to you already.
Enter code:
« Back Send
back to top
Search tags: dragon-are-people-too 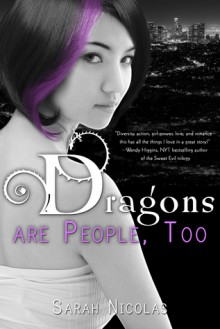 I wanted to read Dragons Are People, Too because of the title. It seemed like such a weird title, I had to find out why it was called that way.

Turns out that dragons are people, too mainly because they are were dragons and spend most of their time in human form working for a specialized government organization fulfilling secret spying missions. Rule number one, never let them see your dragon side. When one of these missions blows up and there is camera footage of an actual drama, all dragons are being contained 'for their and everyone's safety', it is up to 16yo Kitty to prove that dragons are not so bad after all.

It never stops to surprise me why in books all the most serious and most important jobs are constantly given to teenagers. Kitty is this book in no different and has a high ranking position in the secret dragon organization even though she's still at school. As such, most of what happens with respect to the 'case' is highly unlikely and the resolution felt too simple. CINDY was nice though. And I also liked the diversity of the main characters, even though it turned out to be just another of the same kind of love story. 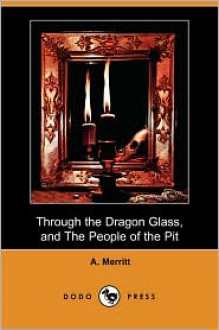 A Merrit sure knows how to write. It's no wonder Lovecraft style is so alike this writer. Remarkable. Made almost 90 years ago it's like reading a Lovecraft story. Horror. Pure Pulp Horror.


People of the Pit
Yukon, Canada. The vagueness of the place is deliberate enough to make you think the place might be real and enough to make sure you couldn’t find it, nor denying it's existence. The characters: Two adventurers searching for gold find a dying man with a tale to tell and a request.

The writing style of scenery
From the North and high overhead there came a whispering. It was not
the rustling of the aurora, that rushing, crackling sound like the
ghosts of winds that blew at Creation racing through the skeleton
leaves of ancient trees that sheltered Lilith. It was a whispering
that held in it a demand. It was eager. It called us to come up where
the beam was flashing. It drew. There was in it a note of inexorable
insistence. It touched my heart with a thousand tiny fear-tipped
fingers and it filled me with a vast longing to race on and merge
myself in the light. It must have been so that Ulysses felt when he
strained at the mast and strove to obey the crystal sweet singing of
the Sirens.

The Feeling of the Pit
I can't describe these carvings! No human being could--the human
eye cannot grasp them any more than it can grasp the shapes that haunt
the fourth dimension. Only a subtle sense in the back of the brain
sensed them vaguely. They were formless things that gave no conscious
image, yet pressed into the mind like small hot seals--ideas of
hate--of combats between unthinkable monstrous things--victories
in a nebulous hell of steaming, obscene jungles--aspirations and
ideals immeasurably loathsome--

The Evil of the Pit
Saw the Things under the lights," he answered. "Great transparent
snail-like bodies--dozens of waving tentacles stretching from
them--round gaping mouths under the luminous seeing globes. They
were like the ghosts of inconceivably monstrous slugs! I could see
through them. And as I stared, still bowing and whispering, the dawn
came and they streamed to and through the entrance. They did not crawl
or walk--they floated! They floated and were--gone!

Through the Dragon Glass
This is another tale that has written pulp/horror fiction in every word. Each sentence is movement to the end. Beautifully written and scary at the same time. As the previous one the narrator is not the one telling the tale. Both stories the narrator is hearing the tale from a third person.

It called us to come up There never has been anything like that thing! Never! At first all you saw was a cool, green, glimmering translucence, like the sea when you are swimming under water on a still summer day and look up through it. Around its edges ran flickers of scarlet and gold, flashes of emerald, shimmers of silver and ivory. At its base a disk of topaz rimmed with red fire shot up dusky little vaporous yellow flames.

Afterward you were aware that the green translucence was an oval slice
of polished stone. The flashes and flickers became dragons. There were
twelve of them. Their eyes were emeralds, their fangs were ivory,
their claws were gold. There were scaled dragons, and each scale was
so inlaid that the base, green as the primeval jungle, shaded off into
vivid scarlet, and the scarlet into tips of gold. Their wings were of
silver and vermilion, and were folded close to their bodies. But they were alive, those dragons. There was never so much life in metal and wood since Al-Akram, the Sculptor of ancient Ad, carved the
first crocodile, and the jealous Almighty breathed life into it for a
punishment! And last you saw that the topaz disk that sent up the little yellow flames was the top of a metal sphere around which coiled a thirteenth dragon, thin and red, and biting its scorpion-tipped tail. It took your breath away, the first glimpse of the Dragon Glass. Yes, and the second and third glimpse, too--and every other time you looked at it.