Log in with Facebook
or
Wrong email address or username
Sign up
Already on BookLikes? Log in!
Incorrect verification code
Please, check your email, the code to access your BookLikes blog was sent to you already.
Enter code:
« Back Send
back to top
Search tags: dying I grabbed this when it came up for the Big Library Read, but then I didn't manage to get to it before the Read was over.

Campbell is the new girl in her southern, predominantly black high school, and she is working the concession stand at a football game, when a racially motivated fight breaks out in the growing line to the stand.  Lena jumps into the stand to take cover.  There are gunshots, police arrive, and that is just the start of a night where things keep getting worse.

As the blurb reports, Lena and Campbell must rely on one another to survive and progress through the night, each demonstrating to the other that her assumptions had been misguided.

This book in some ways reminded me of The Hate U Give, though it has a much more compressed timeline.  In this book, the Caucasian girl Campbell, having been transplanted from the home she shared with her mother in Pennsylvania to her her father's house, is the outsider/fish out of water.  African-American Lena is the wildly popular fashionista Campbell can't help but envy.  I appreciated the way this set-up diverted from more usual book premises. 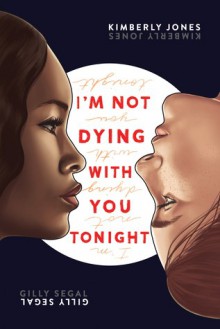 A fast paced story that did not skimp on characterization, this is the story of Lena's and Campbell's chaotic and scary night. Lena is an African-American high schooler who has a strong network of family and friends and dreams of being a high-profile stylist. I loved Lena which is why I hated that she let Black skip out on rescuing her where she was at rather than meeting him where he was at. But Black came through as a solid boyfriend at the end of the story, so I can't be too mad at him. Campbell was the new girl and the reader sees how the neighborhood/area of Atlanta has the tension among residents and the government (police) rising. Campbell was forced to move in with her dad because her mom took a job in another country and wouldn't let Campbell go with her. Her family wasn't really there to support her at all and she didn't really have a support structure before the night went sideways; she did, however, have a certain inborn privilege that helped her and Lena survive the riot and get home.

Everything about this book was pitch perfect and I highly recommend it. It's going to take every recipe the Fairy Tale Cupcake crew has to whip up a quick defense for Mel Cooper when her high school reunion goes from a cakewalk to a car wreck...

Melanie Cooper has zero interest in catering her fifteen-year high school reunion, but Angie insists it's only right that they bask in the success of Fairy Tale Cupcakes--and Mel's engagement to the delicious Joe DeLaura is the cherry on top!

Everything is going better than expected until Cassidy Havers, resident mean girl and Mel's high school nemesis, picks a fight. No longer willing to put up with Cassidy's bullying, Mel is ready to tell the former homecoming queen to shut her piehole and call it a night. But as Mel and Joe prepare to depart, Cassidy is found dead in the girl's bathroom, next to a note written in lipstick that points right to Mel -- making her the prime suspect.

Now, Mel must follow the clues to find the real killer and keep her reputation from being frosted for a crime she didn't commit.

My take: This is one of my favorite cozy mystery series featuring Mel, Angie and Tate, three best friends since high school who opened a bakery specializing in cupcakes. I'm reading the books out of order but I need to rectify that and go back to the beginning.

This book revolves around the high school reunion of Mel, Angie and Tate and brings back a lot of bad memories for poor Mel. It astonishes me how mean kids can be. It really hits close to home for anyone who attended a public school.  It was a really good book. I highly recommend this series to anyone who loves cozy mysteries! I'm going to be quick, because it's late and I'm bushed—also, the more I talk about this, the less I seem to like the book. Which isn't fair—I do like it—but I have issues with it, too. You ever see the memes or jokes online about someone saying they have 6-pack abs, but they're just hiding/protecting them under a layer of fat? That's precisely how this book seems to be constructed.

Picking up some weeks after Cause and Effect: Vice Plagues the City, Jack "Jane" Austen is prepared to come back to work, when something happens to compel him to come back. A priest and an imam are violently murdered, with clear indications that the same people behind these attacks were those responsible for the conspiracy uncovered in Cause and Effect, to cause unrest (at least) between the stagnant Christians and the local Muslims, and hopefully spilling over into a large-scale societal unrest.

You'd think this would be enough to bring Jack back early, so he could try to prevent things from getting worse—and he does. He just has to be eccentric for a while in front of his staff, purposely getting himself in trouble and provoking his new Chief. Because that's what the situation calls for, I guess. I'm glad we're told over and over again how brilliant he is, and what a good cop, too—because you might miss it otherwise.

It's a shame we spend so much time with Jack and Mandy off doing all sorts of non-police things (read: sex, talking about sex, and mooning over each other), because the rest of Jack's team are some truly interesting characters, and it'd be great to see them work. We catch little glimpses of them at work (and some brief idea about their off-duty life), and I think this novel told about them instead of Jack and Mandy would be a much more interesting work.

The word that kept coming to mind (and my notes) as I read this was "self-indulgent." Adams clearly enjoys talking about some things and making the same jokes—he made one 3 times in the first 4% of the book (and countless times in the other 96%). We get pages and pages of Jack and Mandy romancing each other (and at least one of their subordinates makes a pointed remark about their priorities), of Jack going out of his way to be obnoxious, and other assorted things that seem to actually hinder the investigation. Now Adams is far from the first to be this way—Robert Galbraith's latest could use a good trim (of about 150-200 pages), as did many of Robert P. Parker's later works. So the fact that I want to cut about 300 pages from this book puts him in some okay company. In those 300 pages, little happens t advance the plot and we don't deepen our understanding of the characters, because it covers the same ground over and over and over (again, see later Parker).

All that said, the last 25%± of the novel is really good. Almost all of the weaknesses of the book that had been bugging me faded into the background and the crime story came to the forefront (finally). This is the kind of thing I'd been waiting for. If the book was this part, plus another 50 or so pages to set the scene, create a tone, and whatnot—this would be a much more enthusiastic post. As it is, this last chunk of the book redeems the rest and almost makes it worth the effort to get your hands on the book.

Am I still curious about where things are going, and how Adams plans to get there? Absolutely. I will keep reading—and I did enjoy these books, I just wish they'd be put on a diet so I don't have to trudge through all the excess material.