Log in with Facebook
or
Wrong email address or username
Sign up
Already on BookLikes? Log in!
Incorrect verification code
Please, check your email, the code to access your BookLikes blog was sent to you already.
Enter code:
« Back Send
back to top
Search tags: extra-innings 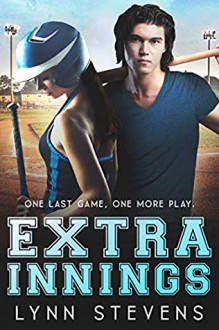 Victoria AKA "Vic" is gonna play baseball.  Who cares if it is a male dominated sport.  She signed up, showed up, and played hard.  She is gonna prove herself if it kills her.

Daniel knows she has a boyfriend, but he also knows the guy is a tool.  He cannot help but be interested in a girl who knows her own mind.  She can play baseball, and is a great addition to the team.

This book felt like is was fast paced.  I love the characters and eagerly devoured each page.  I felt like this book was a great read.  The story was rich, the characters fun to read, and the heat was just gentle.  I cannot wait to read the next installment!  I give this a 4/5 Kitty's Paws UP! 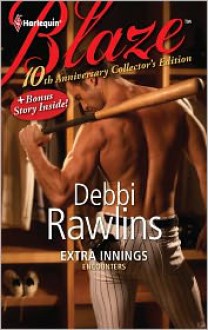 As far as the 3 short stories go [Extra Innings] . . .
Liked the first and third ones, but the second one seemed to take forever to get through - even though it was a short story. All three stories had to do with 3 minor league baseball players waiting/hoping to get called up to the majors. I don't always care for anthologies due to the shortness of the stories and the stories sometimes feeling 'rushed.'

The other story [In His Wildest Dreams] was actually an addition to this book of a story that was released 10 years ago. It was included in this book as a part of the 10th anniversary celebration of Harlequin Blaze.
It centered on the heroine needing an additional participant in her dream study in order to finish her Master's Degree in psychology. The heroine's best friend offers up her brother, the hero, as the final participant. The hero has a long history of dating, but not committing to anyone.
He reluctantly agrees to participate in the study in order to be able to use a vacation cabin during a year that was supposed to be his sister's turn.
The sister warns the heroine that the hero is not someone she should get involved with, that he was charming but would never commit to anyone, etc. She then warns the hero that he better not even think of getting involved with the heroine, as the heroine has too much she needs to take care of in order to finish her degree and is not the type to get involved with someone like him.
Of course, you can figure out what happens from there.
More posts
Your Dashboard view:
All Reviews Text Photo Quote Video URL Activities
Liked posts Top Tags
Press About Terms of Services Privacy Policy Contact Us Blog FAQ Patronaty medialne BookLikes for Authors Partners panel more...
Team Themes Docs API Blogs
Copyright © 2021 BookLikes