Log in with Facebook
or
Wrong email address or username
Sign up
Already on BookLikes? Log in!
Incorrect verification code
Please, check your email, the code to access your BookLikes blog was sent to you already.
Enter code:
« Back Send
back to top
Search tags: fae-fascination 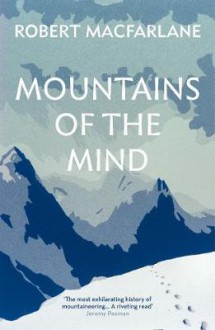 I honestly don´t know what to make of this book. I´m not even sure I particularly liked it. It feels like I didn´t get the insight into the topic that I would have wanted to get from this book.

I would have loved to understand why people feel the need to climb mountains and it´s not a sufficient answer for me to say that they climb because of the beauty of the scenery or that they expand their mind by doing so. This might have applied to people, who have lived 200 years ago, but I can´t buy this for mountaineers nowadays.

The tag line of this book says "A History of Fascination" and this pretty much sums up what this book is. A history of mankinds fascination for the mountains, written from a very British point of view (I swear, almost every person he writes about has been from the British Isles).

One of the thing I found intersting in this book, is MacFarlane´s discussion of perception and how people perceive the mountain from far away in contrast to the harsh reality of the real thing. Unfortunately this just wasn´t enough to make me like this book more than I did.

Somervell has to stop, but Norton presses on to 28,000 feet before he realizes that he will die if he does not turn back. Precariously he descends the slabs, and meets Somervell. They descend together back towards the col, with Norton perhaps twenty yards ahead of Somervell. Suddenly Somervell coughs hard, agonizingly hard, and feels something from inside him, some object, detach itself and jam in his throat. He begins to choke to death. He cannot breathe, nor can he shout to Norton. Norton turns, but thinks that Somervell is hanging back to die. He sits down in the snow, and watches Norton walk on away from him. Then - a final effort - he hammers his chest and throat with his clenched fist, and simultaneously cough as hard as he can. The thing dislodges itself and jumps into his mouth. He spits it out on to the snow. It´s a chunk of his larynx, killed by frostbite.

First of all: Yikes!

Second of all: MacFarlane should stay away from adventure writing, he just can´t do it. In the penultimate chapter he tries to recap the adventures of Mallory on his three expeditions to Mount Everest and god, I´m bored. He really isn´t cut out for exciting adventure writing and even this gory bit didn´t affect me emotionally in any kind of way.

From 1902 to 1903, wtih the help of two Tyrolean guides and an escort of Cossacks, Merzbacher attempted to pick a way through the maze and ridges and glaciers to Khan Tengri. The mountians did not give up their secret easily: Merzbacher was avalanched, attacked by hornets, hounded by abysmal weather, mutinied on by his staff and nearly crushed by a rock earthquake which also triggered an ice-fall. Most seriously of all, as far as Merzbacher was concerned, his tootbrush was lost in a river crossing.

I always found it fascinating, how someone can experience the greatest distress over loosing such a simple thing like a toothbrush, even though all around him there are dangers and perils.

What qualities was the successful mountaineer or explorer proven to possess? Manliness, one might answer straight away - that very Victorian concept which would morph in the twentieth century into machismo. Climbing a mountain provided a confirmation of one´s strength, an affidativ of pluck and potency, an assurance of resourcefulness, self-sustenance and manhood.

Reading this, I´m not surprised that misogyny is still such a huge thing in the world of mountaineering.

Many of those who came to visit the Buller were content to view it from the security of the main cliff-edge. From there they could safely watch the sea boiling and sucking in the breach, and watch the fulmars which nested on the seawards cliff glide to and fro on their hunting forays.

Some among the bolder victims, however, were tempted to walk out along the apex of the arch of rock. There was no real danger. True, in places the ridge narrowed to only two or three feet wide, and the ground underfoot was tussocky, uneven and crumbling near its edges. And when youn looked down at your feet you could see the sea moving below the arch, so that it felt as though the arch itself was swaying liquidly back and forth, liable to pitch you to a watery death ... But then that was the point of doing the walk in the first place; to deceive your mind into imagining its own annihilation. The ridge of the Buller, in other words, was the ideal place to experience the Sublime.

I would be one of the people who stands on the cliff-edge looking at the rock formation from far away.

There is something appealing in the thought, though, that an experience can become even more beautiful by being part of something, which might be dangerous and which is too big and too much to comprehend for the human mind. And that this search for a sublime experience is apparent in certain people, why other people don´t feel the need to explore it at all.