Log in with Facebook
or
Wrong email address or username
Sign up
Already on BookLikes? Log in!
Incorrect verification code
Please, check your email, the code to access your BookLikes blog was sent to you already.
Enter code:
« Back Send
back to top
Search tags: fairy-tale-trope 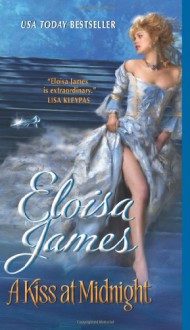 This is a retelling of the Cinderella story, and is on sale for $2.99 (kindle), so I picked it up. I'm always entertained by fairy-tale trope romances, so I'm glad I read this, but it wasn't enough to get me out of my historical romance slump.

Kate is the granddaughter of an Earl, but when her mother died, her father waited a whole fortnight before marrying again, and then he promptly died himself. His widow, the wicked stepmother, had relegated Kate to a glorified servant while heaping all of the wealth on herself and her daughter, the (not-so) evil stepsister, and allowing the estate to be badly mismanaged. When the stepsister suffers an accident, the stepmother forces Kate to impersonate her (the sister) by going to meet a prince whose approval is necessary for the stepsister's marriage to her beloved.

Kate meets the Prince, who is awaiting the arrival of his betrothed, a Russian princess whose dowry will fund his lavish lifestyle and, more importantly, his scholarly pursuits. He and Kate clash initially, but this is one of those books that employs what Sarah Wendell at Smart Bitches, Trashy Books likes to call the "I don't wanna like you, I can't stop thinking about your hair DAMMIT" trope. Tempers clash, sparks fly.

My problem with the book is that much as I love angsty romance where there's some good, nearly insurmountable reason why the lovers can't be together, I'm majorly squicked out in historical romance when heroes seduce a lady to whom they're not able to commit. Contemporary girls can sleep around all they like, and that's fine with me, but in a historical setting, it's just dishonorable to risk a woman's reputation that way. So, much as I enjoyed the chemistry and the bantering between Kate and Gabriel, I couldn't root for them to get together because Gabriel was promised to a perfectly nice girl who'd come all the way to England to marry him and give him all her money, and it's just wrong of Gabriel to be sniffing around Kate's skirts in those circumstances.

I couldn't get over that squick enough to enjoy the story, but a lot of readers will find much to love about this book. 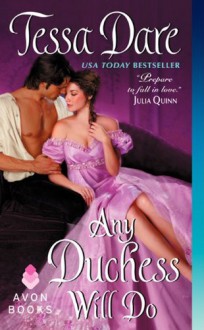 This is a retelling of George Bernard Shaw's Pygmalion, as is the movie Pretty Woman, so many readers will recognize the plot. Desperate for grandchildren, the Duchess of Halford kidnaps her grown son, Griff (the Duke) and brings him to Spindle Cove to pick a bride amidst the aristocratic spinsters there. Planning to foil his mother, Griff chooses Pauline, the serving girl at the local tavern. She is plain and unpolished, the clumsy daughter of a brutish farmer. She has no accomplishments, no formal education, her figure is boyish, her elocution is atrocious, and her sister is a developmentally delayed "simpleton" (which, in that era, suggested a taint in the bloodline). She is entirely inappropriate for the role of duchess, which was, of course, Griff's point.

Based on that premise, I was prepared not to like the book. After all, it's a pretty crappy thing for the Duke and Duchess Halford to do: walk into a tea shop/tavern, loudly announce to all of the women there (many of them spinsters who themselves long for success in the marriage mart) that Griff is to pick a bride, and then for him to choose Pauline just because she is so very unsuitable (which is so cutting because of course she knows she's unsuitable). Luckily, Griff quickly realizes the asshattery of his ways, and offers to make it worth Pauline's while by paying her 1,000 pounds just to let his mother spend a week trying to polish her, even though no one expects success. Pauline has big dreams for a country girl, and the money would get her dreams off the ground, so she swallows her pride and agrees.

Pauline is a wonderful heroine. She is smart and funny without being mean-spirited, vulnerable without being weak, naive without being foolish, kind without being saintly. I love that her background allows her to be more sexually liberated than most Regency heroines: she is not a virgin, and she does not have the same obsessive care for her reputation that gentlewomen have (though she's far from being easy).

Though at first glance, Griff appears to fall within the stereotypical mold of the reformed rake hero, he, too, is an original. He is reformed not through the love of a good woman, but by a crisis of conscience that takes place before the story begins, and Dare's treatment of this tragedy and its fallout is sympathetic, nuanced, and entirely believable. I adore that Griff is not perfect: he is damaged, but it isn't up to Pauline to fix him; they both know he needs to fix himself before he can be a good partner to anyone.

I also think the class divisions highlighted by this plot were very well done. Rags-to-riches stories in Regency romance tend to strain credulity because that society was too rigidly hierarchical for nobility to get together with the servant class without serious fallout for both parties, yet so many books employing this trope sweep those realities aside with pat, unlikely solutions. This story doesn't try to raise Pauline to the standing of a duchess, but recognizes for their romance to have any hope of success, she must come up in the world, but Griff must also sink quite a bit.

Another example of the realistic way that the class divisions are addressed have to do with the evolution of Griff's behavior toward Pauline. He was initially very high handed and arrogant, and then as he got to know her, he became more sympathetic to the issues dividing them, but was still unintentionally insensitive on occasion, such as when Pauline says she must leave his bed and get back to her own before the servants see her, and he says, "So what? They're servants," (to the mortification of them both). People don't shrug off the trappings of privilege overnight: consciousness raising is a process, and even well-intentioned people screw it up sometimes. 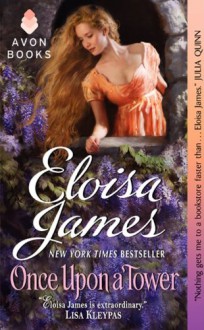 The first half of this story is inspired by Shakespeare's Romeo and Juliet, while the second half--or maybe just the last few chapters--is inspired by the Rapunzel story. Gowan is a Scottish duke with immense wealth and responsibilities, inherited when he was just fourteen. (He's all of twenty-two, now.) He meets Edith at her coming out ball and is so taken with her that he meets with her father the very next day to work out the details of their engagement -- without bothering to actually ask Edith for her hand or spend any time getting to know her. For her part, Edith was so sick with a fever at the ball that she could barely see straight and can hardly recall the duke at all.

Despite this inauspicious beginning, however, the couple quickly find that they're actually quite well matched in wit and temperament. They exchange letters and spend enough time together during their brief engagement to begin to fall in love. By the time they marry, less than half-way through the book, they seem well on their way to their happily ever after, and I was wondering what could possibly happen to generate enough conflict to carry the story through another several hundred pages....

... and then came their wedding night. Edie is a blushing but eager virgin, who is better informed about the ways of the flesh than most virgin brides due to her young stepmother's propensity for oversharing. (Layla is wonderfully three-dimensional and relatable; in my opinion, she's the best thing about this book.) Less typically, Gowan also comes undefiled to the marital bed, and is every bit the blushing and eager virgin as his bride. Herein lies the conflict: they are both willing and eager, but wretchedly clumsy and painfully clueless in the sack, and they lack the communication skills to find their way out of the ensuing morass of hurt feelings and wounded pride.

I liked the poignancy of this story. Gowan and Edie are in love, desperate to please each other and make a success of their marriage. Both are also grimly aware of the perils of failure: Gowan's parents, and Edie's father and stepmother, had/have troubled marriages that serve as stark reminders of the embittered misery that awaits Gowan and Edie if they can't get it together. As I read, I was sympathetic to their dilemma and pulling for them as a couple, but after awhile, I wasn't enjoying the read.

Here's the thing: A bad sexual encounter, early on in the relationship, is not necessarily a kiss of death. Jennifer Crusie's Faking It comes to mind as an example of a book where the hero and heroine have a wretched first sexual encounter, but it's comically bad, it doesn't stop them from throwing sparks in other aspects of their relationship, and most importantly, they get over it. By contrast, though, Gowan and Edie have bad sex over and over and over again -- and not comically bad, but tragically bad, painfully bad, soul crushingly bad. -So bad that their inability to connect sexually leaves them unable to connect in any other aspect of their relationship.

And you know what? That's not really all that fun to read about.