Log in with Facebook
or
Wrong email address or username
Sign up
Already on BookLikes? Log in!
Incorrect verification code
Please, check your email, the code to access your BookLikes blog was sent to you already.
Enter code:
« Back Send
back to top
Search tags: fantastic-character ***Find this review, and an opportunity to win a copy of the book on The Social Potato

This book is one of the worst books you will ever read and I mean this in the best way possible. This is a HORRFYING READ and one that will shock you and amaze you. This is a read that will make your eyes water if not make you outright bawl about how unfair things can be.

This is my first ever book by Courtney Summers and if this was anything to go by, I know all of her other books will be amazing.

I went into this book expecting my heart to be torn apart and it was. IT WAS SO TORN APART. I was constantly taking breaks to watch a sitcom (Unbreakable Kimmy Schmidt if you are wondering) to find some comedic relief and to ease the pain I was feeling.

One of the ways in which this book was slightly easier to read was that we are dealing with the aftermath of the rape instead of a before/after kind of situation (although there is a before/after timeline).

Romy is the main character. She is such an amazing character too and I don’t know where to begin describing her. It’s so hard to be inside the mind of someone who is being bullied because she ‘cried rape’ and someone who feels like they would be better of dead. To be in the mind of someone who is filled with so much self-loathing is hard but given the way people reacted to the situation, the way they refused to look at her side of the story, it’s hard to blame her. All you want to do is hug her and tell her it’s going to be okay but how do you expect her to believe that?

What I adore about this book though is that even though everyone is a complete asshole to her, her mom and her mom's boyfriend were there for her. They don’t treat her like crap. They feel her pain and you can feel their helplessness as they try to find a way they can make this right for her. But how do you do that? How do you right something when the most powerful person in town is involved and will prevent you from doing so? It’s heartbreaking but I love that they are there for her in any way they can be.

There is also a beautiful creature named Leon in this book who I love. He is perfect. And I think one of my favorite things about him is that he has no clue what Romy has been through. So his beautifulness(and I am not just referring to physical beauty), and the fact that he is so considerate isn’t because he already knows what Romy is dealing with, it's beacause he is just a kind and considerate person in general and I love that! I love that when Romy tells him to stop, he stops and then the way Romy reacts to that action is beautiful. It’s a little hard to be understanding of the way Romy sometimes treats Leon, and I wish she would give him a chance, but it’s so hard to blame her considering what she goes through on a daily basis. The shit she has to put up with is ridiculous.

This book touches on so many important subjects like bullying, and victim blaming and it handles them beautifully, with the respect they deserve. I keep using the word beautiful when this book is anything but. I just don’t know how else to describe the way, and with the delicateness, in which Courtney treats these issues. She does not play around. We are not thrust into a world where the main character hasn’t told anyone or is hiding from what happened or even has a lot of people supporting her. She is alienated because she dared to tell someone what happened,and people constantly pick on her in the most subtle of ways as a result. But Romy, Romy still keeps her head up and marches through this. She is filled with self-loathing but somehow she still manages to get through this and I love it!

I love this book! I don’t want to say I do because I don’t love what happens but I love how the author has dealt with the issue at hand.

This is a painful book to read, I am not going to lie. It’s going to frustrate you that all of these fucking douchebags REFUSE TO ACKNOWLEDGE HER PAIN and MAKE FUN OF IT. It’s fucking ridiculous that she gets mocked about it but this is what happens in our society. There are not many perfect situations where people are supportive of what happens. It’s disgusting that we live in a society where women are terrified to report cases because of their fear and it hurts but the most wonderful thing about this book is that while it’s completely realistic in it’s portrayal of the situation, it also leaves us with a sense of hope. This is not a book about happily ever afters but this is also not a book that is about the hopelessness of the situation. It  gives us something to hold on to because there will always be hope no matter how bad the situation and it is SO IMPORTANT to remember that.

I love this book and I love Courtney for writing it and I just hope that someday, we will live in a world where we don’t constantly sham or victim blame women for the pain they have been through. With all the praise that I kept hearing for this book, I was prepared to be amazed yet there was some part of me that expected this book to be just like any other dystopia I’ve ever read. Sometimes you just gotta roll with it because I chose to and this book turned out to be one of the best dystopias I’ve ever read. It’s richly developed but more importantly, it’s realistic. It’s not about some girl who is going to completely change the world and make people realize that everything is not okay within the world. It’s about a young girl who is trying to escape her fate.

Aya is not a perfect female lead but what makes her work is just her plain old determination to get out of the garden and to go back to the mountains. She never loses hope yet there are times when, even to her, things don’t look bright. She tries everything and isn’t squeamish about her options. She doesn’t always make the best decisions but at the same time, given her situation, you cannot really blame her! Aya is a fantastic female lead and a joy to read about. She is one of the reasons why this story shines.

One of the other reasons this story shines is because of a certain someone that I do not want to name because reasons. You may have come across many reviews that said that this book doesn’t really have a romance and those reviews would be right and what I'd like to add onto that is that there is a romance, however slight, but it is not the life of the book. It’s so well done though and deserves a mention for that very reason! I don’t even know what to tell you about it without turning this review into an incoherent mess. The love interest is so so so swoon worthy. He is so sweeet and so understanding. He understands when Aya needs her space and respects that. He is compassionate and while he also makes some bad decisions, I can forgive him with ease them because he is, otherwise, a perfect love interest.

This story also comes equipped with a fantastic cast of secondary characters. Not all start off as likeable and all undergo development over the course of the book. They all play an important role in the book and none of them are just mere plot devices. They are all well rounded characters and all around awesome.

The reason why this book managed to score 5 stars though was because of the premise. This is a fantastically developed book. The world building may not be completely original but the author gives the story her own feel and manages to make it stand out. One of the things within the book that really stood out to me was that there were actually people protesting the happenings of this world. Can you believe it? Can you believe that out all of the people in this world, a 16 year old is not the first one to realize that there is something wrong with selling girls like they are goats? Isn’t there something so beautiful about it? I like knowing that the responsibility of an entire world does not fall on the shoulders of a mere 16 year old. There are people there who are fighting for change and maybe someday, things will change but that is not the purpose of the story.

There is something about reading a book that isn’t about a young girl changing the entire world but rather a young girl trying to escape the fate that was pushed open her. It’s realistic and at the same time, it prioritizes something that we can all get behind as readers, a young girl's journey to freedom. Aya is trying to escape from "The Garden", a place where girls are auctioned off like they are goats.

If you, like me, aren’t so enthusiastic about dystopias any more, I'd still say to give this one a chance. It's so refreshing and brings a much needed change within this genre.  The book also happens to be a stand alone so that is another thing it has going for it!

This is a gorgeously written book that I would recommend to everyone. It’s fantastically paced and features some amazing characters and a fantastic world and really, do you need more reasons to read this book?!?! GET ON IT. 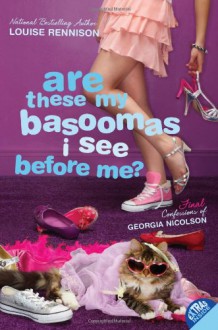 Aww a great ending to the series. :) I love love loved it. Yeah for Georgia and Dave getting together at last! It only took a long time for them to see in they are best together.

Poor little pet bird though, cats watching it 24/7 and also trying to jump on the cage.
Libby was just Libby (weird as ever).

I loved the series, and will be sure to re-read them again some day. :) Great book, though I really hope Dave and Georgia get together.