Log in with Facebook
or
Wrong email address or username
Sign up
Already on BookLikes? Log in!
Incorrect verification code
Please, check your email, the code to access your BookLikes blog was sent to you already.
Enter code:
« Back Send
back to top
Search tags: female-schindler 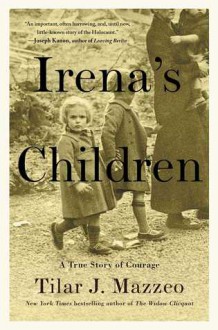 Thanks to Net Galley and to Gallery, Threshold, Pocket Books for offering me a free ARC copy of this book in exchange for an honest review. I had not heard the story of Irena Sendler before I read this volume, and it is one of the great untold stories of War World II, unfortunately not the only one. In the last chapter of the book (before the copious acknowledgements and notes) the author speculates about the possible reasons for that neglect, including how tough life was for those who had supported the Polish Resistance in the years after the war, under Soviet control, and also personal difficulties and even change in religious feelings. By the time Irena Sendler wrote her memoirs she was in her nineties and it must have been impossible to recall all the details of what had happened at such a cruel time, fraught with risk and physical and mental hardship. I could not help but wonder if the fact that she was a woman also had a bearing on it. Heroism is expected in men, for whom it is OK to put duty or fighting for one’s ideals before family and heart matters, but when it comes to women, the general discourse looks at them in a suspicious manner if they put ethics, politics or ideals before their role as homemakers and their families. Sendler also always said that the task of saving the children was a team effort and insisted on giving credit where credit was due, and collective events always make for a story less easy to sell and less straightforward to tell. I learned a lot, not only about Irena Sendler and her collaborators, but also about what Poland went through in the war, the resistance movement in Warsaw and Poland, and the strength of individuals set on helping others, no matter how big the odds against them. Although there were betrayals and terrible things (not only on the German camp) taking place, there are also incredible feats of bravery and generosity. It is easier to fully comprehend what certain events might have meant for the population when one has a human being (be it an invented character in historical fiction or a real person in non-fictional accounts) to follow and empathise with. In this book, we follow not only Sendler but also the experiences and fates of many of her friends and collaborators, and also of some of the children who were rescued by the whole team. The book is detailed and follows a chronological order (apart from a short Prologue set at a particular dramatic moment for the protagonist), building up from the early times before the German occupation, providing us enough information about Irena to understand where her ideas came from, and showing clearly how quickly things deteriorated, at first for Jews only, but eventually for everybody. It is not an easy book to read, not because of the writing, but because of the content. Some of the images the book creates: of the effects of the epidemic illnesses, of the contrasts inside the ghetto between the glamorous cabarets where champagne flew a few streets from where others were dying, mothers throwing their children over the wall to try to save them or the Jewish family who sent a gold crucifix and a baptism gown for their baby when they were informed he’d have to be converted to Catholicism to save him, I will not forget. There were blackmailers, and unknown kind strangers, people who would not join in the cause but helped given a chance. This is not a story of battles and big armies (although they are there too, in the background), but of individual and small guerrilla resistance, of the everyday battle and of the people who would help, because of their beliefs and ethics or for money. Perhaps the best-laid plans fail because they never take into account the individuality of the cog in the machine and how they can subvert everything, both for good and for bad. I recommend this book to anybody interested in this historical period but perhaps not as familiar with the history of what happened in Poland as with events in other places. It is also a great read for anybody interested in inspiring stories of human endurance, resistance, bravery and fighting against all odds. Although the book is not a memoir of Irena Sendler’s life, and only makes a passing reference to what happened to her after the war, it centres on her and her role in saving the lives of over 2500 Jewish Polish children. Sendler is not presented as a heroine with no weaknesses and the book tries to show her doubts and internal struggles when trying to decide what to do, worrying about her mother and her lover, Adam, but sometimes putting herself and others at untold risks without thinking about it. It tries to remain close to the documentation, data and witness accounts, although I recommend reading the author’s note before reading the book itself, as that explains the process of creation of the book and how the different materials are incorporated into the final narration, including the use of italics to indicate material the author has written and added to make up the missing parts. In one of the reviews I saw they mentioned pictures, but I got an ARC e-copy with no photographs on it, so I can’t comment on them. There are very extensive notes of the sources at the end that will be useful to people wanting to explore further the materials and a cast of characters that will be useful to keep track of the many characters (especially as some of them had to change identities and names). I also noticed that there is a version for Young Adults that is worth exploring. In sum, an important work to bring attention to a figure and a movement that deserves to be better known and remembered. A must read.