Log in with Facebook
or
Wrong email address or username
Sign up
Already on BookLikes? Log in!
Incorrect verification code
Please, check your email, the code to access your BookLikes blog was sent to you already.
Enter code:
« Back Send
back to top
Search tags: free-amazon Liz Stokes came across a guy in the bushes one night when she was heading home. No, he wasn’t stalking her or choking the chicken. Actually, he was beat up pretty good, so she took him home with her. Luckily Timothy Hamilton was a good guy and not some serial killer. They ended up being roommates and occasional lovers until the day he was murdered. And that’s when the life as she knows it gets tossed out on its ass and her new unbelievable, are you fucking kidding me, life begins.

With the murder of Timothy, Liz inherits his weird ring and his even weirder business partner and is suddenly thrown into a paranormal life she had zero idea existed. The learning curve is steep and Liz isn’t buying it even though she’s seeing this shit with her own two eyes. So, while I like Liz and her snarky attitude, I really can’t stand how dumb she is at times. Vincent is an asshole. But he’s supposed to be so it’s all good. Lol

The story could use a bit more editing, but it’s a great idea with a decent execution. For this first book there’s really only three main characters: Liz, Vincent, and some strange guy named Frederick “Bat” Batholomew. There is a Big Bad in the form of Lord William Ruthven, but I don’t yet know who or what he is or what he wants. I suspect he’ll play a bigger role in the next books. The story is suspenseful, humorous, and intriguing, so I’m looking forward to reading more.

The e-book version of the 2017 Halloween novel The Legend of Decimus Croome: A Halloween Carol is being offered for free from today until September 5 on Amazon.

It is a brand new Halloween novel based on A Christmas Carol by Charles Dickens. The e-book version of it is currently being offered for free from September 1 to September 5 so that book reviewers can read it in time for Halloween book reviews.

Although A Halloween Carol was originally written for preteens and young adults, it makes a great holiday story for readers of all ages. Younger readers will enjoy the spooky tale of a despicable holiday humbug who is scared witless by four eccentric Halloween spirits when they whisk him away to Halloweens past, present and future.

Adults will enjoy a nostalgic romp back into their Halloweens past and a brief romantic encounter with long lost love. Young and old readers alike will enjoy the delightful humor, clever word play and black cat antics sprinkled liberally throughout the book.

I hope you will visit Amazon and nab your complimentary e-book The Legend of Decimus Croome: A Halloween Carol. A rock climber who enjoys sex is offered a lucrative proposition. She agrees, signs the contracts and then gets so much more than she bargained for.

Despite the fact I frown on books that start late and end early (8% & 84% for this one) the writing is pretty good, the characters interesting and the plot creative, so it gets a decent rating from me. There’s not much to dislike about this one. I’m a little fuzzy on how the pterodactyl managed to fuck her six ways to Sunday while flying around and the logistics of such a big creature and a relatively small one managing to mate, but this is one is decently enough written that I wouldn’t mind reading more by this author. 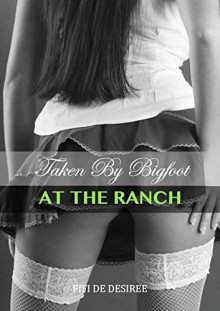 Poor little rich girl whose husband is gone all the time, gives her incredible gifts and leaves her on their massive ranch where they apparently have no one working for them.