Log in with Facebook
or
Wrong email address or username
Sign up
Already on BookLikes? Log in!
Incorrect verification code
Please, check your email, the code to access your BookLikes blog was sent to you already.
Enter code:
« Back Send
back to top
Search tags: from-a-high-tower 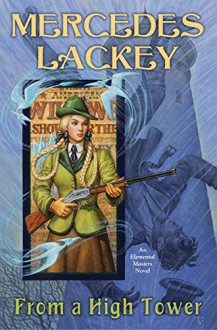 Like most Grimm's Fairy Tales, Rapunzel isn't necessarily the cheeriest of stories, though the level of darkness depends on the telling.  But, they tend to stay true to several points; a mother with an irresistible craving for rampion or other greens growing in someone else's garden, the thieving father trading away their unborn child, the child growing into a young woman with very long hair who lives in a tower, and a young man climbing the tower and then falling from it.

More or less, that is the opening of From a High Tower, an introduction to the chosen fairy tale inspiration.  Some notable differences exist, such as the benevolence of the "witch" who raises "Rapunzel," the elemental mastery they both possess, and the villainous nature of the "prince" who comes a courting.

The real literary tribute is to that of a German author who wrote fantastical stories of the Wild West with a very loose grasp on actual American frontier life.  The story continues the Elemental Masters story arc started (I believe) in Blood Red, taking place in German with a strong connection to the Schwarzwald Lodge.

There's a good emphasis on the friendships in this story, which is always good.  I feel like the elementals have become increasingly magical-fairy helpers, and I liked them more when they were less human, but that's a personal opinion.  I am however pretty damn fed up with the casual threat of rape to go "HERE is the villain."  Quibbles aside, it fits well within the newer Elemental Masters books (past few years vs. the earlier less defined as a series books).

Advance Reader Copy courtesy of DAW (Penguin RandomHouse) in exchange for an honest review; changes may exist between galley and the final edition.

Another of her retold faery tales/elemental masters series, this book was very different than I expected. It starts off with a father looking for food for his heavily pregnant wife and his eight children. In the time period in Germany there were many families in just such a straight. A hard working father just not making enough to feed his family. He finds what he believes is an abandoned home and garden and decides to raid it to feed his family. Of course it belonged to a witch..or more an elemental master who demands his most current child as payment.

Unlike the usual run of this story the elemental master is actually a good woman who knows that the child will be an elemental magic user and decides to step in to save both the child and the family. She gives the father and family the home and takes the baby girl far away to raise her. As you can imagine a child in the 1800s with magic in Germany would be ostracized if not out right killed.

Now mix into this the research part. See Ms Lackey always does a ton of research and you can tell. In that century there were a collection of books by an German author about the American wild west. They were hugely popular but well...not accurate. She has mixed in those books and real history along with the magic we all crave to give us a great tale.

I could write tons about this novel and how much I enjoyed the mix of wild west show, German myths and legends and faerie tales but why not just read it and enjoy. This series just keeps getting better and better IMO

There is a lot to like about the latest installment in the Elemental Masters series.  I am pleased that the last two books have taken place in Germany, and thrilled that the heroine from the last book appears in this one.  I'm also pleased that the emphasis for both young women is on friendship, responsibility and personal growth rather than romance.  And as a German by name and a tiny bit by heritage, Lackey's use of Karl May's books delighted me.

Where I dropped a star from the rating was the new-to-the-reader (if not the author) information that a man's power can be stolen by murder, but for a woman, it must be rape.  That was jarring for me.  I don't demand that my modern fairy tales be sanitized, but I do object to what seems a fairly glaring double standard.  Kill everybody or rape everybody (or do something more creative to steal power, just to make me happy), but don't kill the men and rape the women, because that standard should have been thrown out years ago.