Log in with Facebook
or
Wrong email address or username
Sign up
Already on BookLikes? Log in!
Incorrect verification code
Please, check your email, the code to access your BookLikes blog was sent to you already.
Enter code:
« Back Send
back to top
Search tags: h-c-elliston 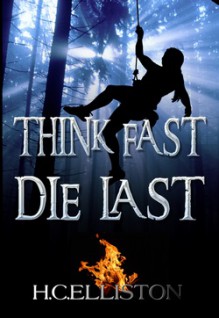 In solidarity with the Twitter campaign #IndieApril, I alighted on this book by independent author, H.C.Elliston over the Easter weekend. This was my first dip into the work of Ms Elliston and the first book from the ‘romantic/thriller’ genre to make it onto my ‘Booklikes’ virtual shelf. Ordinarily, not what I would describe as ‘my thing’, it can sometimes be good to mix it up a little and I came to “Think Fast, Die Last” with an open mind.

After years in an abusive, controlling marriage, the main character (Jenna) is making a break for a happier life with Dylan. The first step in the transformation is a weekend retreat, but the pair find their idyllic hideaway has been double-booked and their privacy invaded by another equally unimpressed couple (John and Kerry). Though the couples have different agendas, they find themselves bound together for mutual advantage and to survive the crossfire between competing criminal gangs, who appear to have violent designs on their respective well-being.

Naturally Jenna’s husband (Alan) is confirmed as a waste of space, but unbeknown to Jenna his criminal activities have attracted the attention of more serious thugs and by association placed his estranged wife in danger. In contrast, Dylan is the antithesis of Alan and through his behaviour under the trials of a life-threatening situation, he and Jenna may have a future, if they can both just survive.

In summary, this book is a light holiday read. The scenario is mildly improbable, the threatening villains wannabe sopranos, but far too hapless and incompetent to suggest genuinely organized criminals and the love interest is consistent with a vulnerable woman warily extricating herself from a disastrous marriage. The various dramatic flashpoints felt more like swells than crescendos, but the storyline moved along without shredding emotions and sometimes that’s just fine.

In a sense there was a tension in the alloying of genres, in that the book didn't feel like an out-and-out romance, but nor was it especially thrilling. Still, there was enough for me to think that I may check out one of the author’s other novels.

Just one observation on the ‘pov’ layout of this novel. Thirty four chapters and all bar a few written from Jenna’s perspective, so in various parts many successive chapters entitled ‘Jenna’. There seemed to be different thoughts on this within the #WritingCommunity twitterati, but as a personal view it seemed unnecessary and a bit irritating. If the perspective hasn't changed, as the reader, I may only need to be signposted when is does, but I accept there are differing views and this hardly counts as a blemish, on an otherwise enjoyable book.