Log in with Facebook
or
Wrong email address or username
Sign up
Already on BookLikes? Log in!
Incorrect verification code
Please, check your email, the code to access your BookLikes blog was sent to you already.
Enter code:
« Back Send
back to top
Search tags: harper-connelly 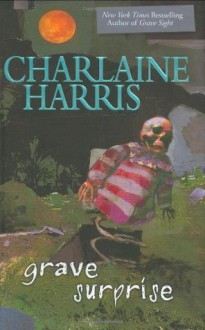 Like "Grave Sight", the first book in the series, "Grave Surprise" is constructed around the consequences of Harper using her strange gift for finding the dead and knowing how they died. The plot is complex enough to be satisfying and plausible enough not to be irritating but the real focus of the book is to give a deeper insight into about Harper and her relationships to her family.

During the book, I was curious to find out who the bad guy was but the real fascination was in learning more about Harper's background and her relationship with the men in her life, especially her "brother" and the pierced and tattooed young psychic.

Harper is both fragile and strong. The two parts of her are bound together by her bravery and her need to find the truth.

Harris succeeds in getting the reader to see the world through Harper's eyes and to sympathise with that point of view. All the little details are right and the pace is well-managed.

I would have been happier with a little less need to recap the first book in the second but it was still a fun read. Charlene Harris has a talent for writing about the different and the damaged; Harper Connelly is both.

Harris' smooth writing style makes this book an easy read but that is not to say that the book is without substance. Harper Connelly and her brother are both people I want to know more about: ethical, loyal, brave and broken.

Harris gives Connelly a distinctive and compelling voice. This is a woman who sees the world differently and is brave enough not to look away.

Of course, there is a plot, complex enough to be intriguing and transparent enough to let you smugly anticipate the ending, but the plot is much less important than the characterization and the back-story.

Connelly can attribute her strangeness to neglectful, abusive parents and a bolt of lightning. The people she meets have no excuse for the monstrous things that they do or allow other people to do.

As she does in her Sookie Stackhouse books, Harris leaves me feeling that the taken-for-granted violence and hatred in America is far more frightening and repellent than anything supernatural.

Oi vey, that was a alot of talking.

I loved the premise of this book, but the first person narrative kept me away for quite a long time. Finally biting the bullet, I gave it a shot and I'm not all that glad that I did.

Aside from Harper's original search and a quick side job, she didn't use her "grave sight" for much of anything. Mostly it was just being nosy and trying to solve a murder (even though that's not usually her thing) while townsfolk attempt to scare them into leaving. This is where a huge problem for me arises. She's been working around the country, using her gift to find dead bodies. So even if she's not buying commercial time during Super Bowl halftime, she's known throughout the country. One would think that that level of renown would come with a few connections. Connections that would help when this small hick town decides to band together to terrorize you in very illegal ways. You know,somebody you could call to be like "Hey, tell these fucking rednecks to lay off." and they could because they've got that much pull. Seriously? It sounds like Harper and Tolliver are just homeless people that wander the country doing odd jobs. And their lives sound miserable.

There really was no happy ending to this story. Harper and Tolliver dip the fuck out ASAP and it sounds like half the town is dead or in jail. The romance, which doesn't really exist, is literally cut off like a fish head in the last couple pages. It's almost like "The Big Breakup" scene was mysteriously missing from my e-book, it was so sudden. And just a total nonentity. Like the author was about to write "The End." and realized the romantic interest hadn't been wrapped up, so she just had the characters awkwardly wave goodbye and walk away. Everything is just kinda... over. So fucking weird.

The relationship between step-siblings Harper and Tolliver was doubly weird. The extreme dependence on Tolliver that Harper had felt bizarre. After the rough life she had, she could live well but instead clings to her brother and lives an empty sort of life. Since we're stuck in first person perspective, we don't get to know what Tolliver is thinking or feeling, but I felt like he resented her for making them live this life. I dunno, but the relationship felt close and strained at the same time.

The worst part, though, was that by chapter four, I knew the outcome. And I was 100% right about every single detail. Just two little sentences and the author gave away the whole thing. I kept reading - bored as I was - though, because I wanted to know how it was revealed and if there would be a big confrontation where Harper awesomely wins over the whole town (it doesn't, by the way).

I dunno, this whole thing was weird. It was boring and a struggle to get through. I wouldn't recommend it. At the same time, I feel like I can't give up just yet and I need to give the series a second shot with the next book. I'm having a crisis of faith or some shit. 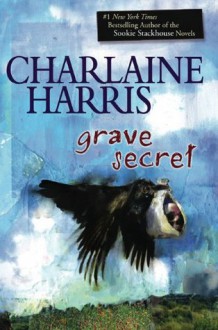 Grave Secret is the fourth Harper Connelly paranormal mystery from Charlaine Harris. For the uninitiated, Harper Connelly, after suffering a lightning strike at the age of 15, has the ability to sense the dead and to know how they died. She and her brother--that is to say, her stepbrother, Tolliver, who is also her manager and business partner--make a living by traveling around the country consulting for local police departments and people who want to learn the truth about the death of their loved ones. At the end of last installment, An Ice Cold Grave, Harper and her brother--um, stepbrother--had finally acknowledged the nature of their love for one another, overcome the ick factor, and become partners in all senses of the word. In this latest, everything they do is informed by this development in their lives--they're telling everyone they know, and most everyone is as skeeved and intrigued by the situation as I was. Some are downright disgusted, and it doesn't help matters that Harper frequently still refers to Tolliver as "my brother." And, although Harper and Tolliver don't share any blood, they do share two half sisters, the children of his father and her mother. Why, it's a regular old Southern Gothic! Grave Secret neatly dovetails the current case, that of a wealthy Texas family that wants to learn the details of their grandfather's cause of death eight years earlier, with the trauma that drives them, the disappearance of their--rather, Harper's--sister Cameron nearly a decade before. Tolliver's father, Matthew, has been released from prison, and although his desire to connect with the son he abandoned for drugs many years earlier is both obnoxious and suspect, it helps steer the lovers closer to an understanding of the truth. Charlaine Harris is a master craftsman, and endlessly creative (although she juggles four different series, each is distinct in tone, voice, and story from the others). She brings together the paranormal, the Gothic, and the crime aspects of her story neatly, and in a most satisfying way.
Like Reblog Comment
show activity (+) 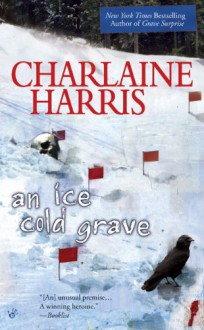 So In this installment of the Harper Connelly series, she is tasked with finding the body of a young boy (assumed dead) after a string of boys have gone missing in the last 6 years.

It apparent there is a serial killer pattern and what she finds is gruesome to say the least.

The book centers around the murders and the "building sexual tension" between her and her step brother Tolliver. this is where it goes down for me. Their relationship was awkward and forced and I couldn't believe the romance at all.

The written sex scenes I had to glance over because they were so awkward and weird.

I just...didn't believe the "we could do whatever we wanted to each other and its just amazing and fireworks" The description of his parts was kinda weird too.

"i thought I would weep with joy"

SO yes on the mystery no to the bromance.