Log in with Facebook
or
Wrong email address or username
Sign up
Already on BookLikes? Log in!
Incorrect verification code
Please, check your email, the code to access your BookLikes blog was sent to you already.
Enter code:
« Back Send
back to top
Search tags: historical-cozy Ok, so I'm using this one for Cozy Mystery. Night of the Living Deed will be used for Ghost. I'm getting more of my review backlog out of the way, because, one way or another, I plan on starting the new year with a clean slate. I'd like to leave anything I haven't reviewed by then behind.

Lady Victoria Georgiana Charlotte Eugenie (aka “Georgie”) doesn't want to spend Christmas with family members who don't really want her around, and she's been forbidden from going to visit her commoner grandfather and spending the time with him. When she spots an ad for a position as hostess at a party in a little village, she jumps at the chance for a more enjoyable Christmas. Everything seems to be going well, except Georgie keeps hearing about apparently random and accidental deaths. She can't shake the thought that there's something sinister behind it all.

This is another audiobook I bought during a recent Audible sale, and I can happily say I didn't regret the purchase. Katherine Kellgren does such a wonderful job with the narration that I'm considering getting another book in the series using one of my precious credits. I particularly liked the way she voiced Georgie (which is good, since Georgie is the narrator) and Darcy. I had been worried, because The Twelve Clues of Christmas is the sixth book in Bowen's Royal Spyness series, and I had only ever read the first. I was able to follow along pretty well, although I'd still like to go back and read books 2 through 5 at some point.

I listened to this book at this particular time of the year because I figured it fit. There was the Christmas party, a few traditions I knew about (caroling, presents, mistletoe, etc.), and a few I didn't (the yule log, the little charms). But this was a mystery, so there was also death. Lots and lots of death. Like, enough for several books. It got to the point where I stopped keeping count of the number of people who had died, and the pattern, once Georgie figured it out, seemed a bit ridiculous. Still, it was an enjoyable mystery, and I particularly liked the character interactions that went along with it all.

I vaguely remembered that, in the first book, Georgie and Darcy had had a lot of chemistry, but various things had kept them from becoming an actual couple. I was worried that this book would continue in that vein, to the point that I cheated and checked the descriptions of the later books. Georgie fretted about the status of her relationship with Darcy (wouldn't a guy who liked her keep more in touch with her?). And when things started to go really well, she fretted over the fact that they couldn't legally marry, what with their differing religions and her being thirty-somethingth in line for the throne.

Georgie's grandfather and mother were both around, as was a huge cast of characters I couldn't really keep straight very well. It all made for nice, fun listening, although there was a bit of a darker edge (beyond all the deaths) – hints of World War II on the horizon. A small collection of short stories that Thirkell wrote for various publications during her career.  Approximately every other story was about the cast of characters in High Rising and set in Barsetshire; most of them featured Tony, Mrs. Morland's incredibly obnoxious youngest son.  It's clear as crystal that child is going to grow up to be a pompous wind-bag.

A Private View, was my least favorite of the stories; I'm not quite sure what the point of it was as the story ended without any resolution at all and it included some incredibly distasteful racial slurs.

Christmas at Mulberry Lodge was a sweet story, written as though Thirkell is telling a story to children.  As I was reading it, I thought I might read it to my nieces when they arrive for the holidays.  Until I got to nearly the end and thought again.  Didn't like the ending.  At all.

The last story is A Nice Day in Town and I thought it was close to brilliant.  This story takes place much later; WWII has begun and rationing of everything has set in.  The author did a brilliant job making me feel the weariness and frustration and mourn what England was reduced to while the fighting raged on, yet she still managed to end the story on an optimistic note. I went through a phase in my early 30's where I couldn't go to sleep at night unless one of the first 3 Lethal Weapon movies was playing on my bedroom t.v.  I don't know why it had to be Lethal Weapon but there it was.  At that time of my life, 'comfort' was defined for me as my apartment, my bed, my cats, and Lethal Weapon on the TV.  I'll leave the fact that I usually fell asleep during the shoot-em-up scenes for the analysts to hash out.

Nowadays I can't fall asleep in front if a t.v. if my life depended on it.  I'm not even going to talk about the noise levels of those wonderful 80's/90's movies.  But lately, comfort has been temporarily defined as my house, my bed, my cats and a cozy mystery taking place 'back-in-time';  WWII, Victorian era, whatever.  That's part of what makes my re-reads of The Manor House series especially enjoyable at the moment and why it's taking me no time at all to zip through these lovely little stories that are the book equivalent of a cup of hot tea and a biscuit in front of the fire.

For Whom Death Tolls centers on the mysterious death of an American Army Air Force officer in the church bell tower.  One of the officers/pilots living in the Manor House is accused of the crime and as he also happens to be the romantic interest of Lady Elizabeth's secretary, and part of Colonel Earl Monroe's unit, LE feels compelled to investigate.  Also curious to her are the suddenly bountiful, beautiful breakfasts that her housekeeper is serving each morning while being belligerently evasive about where such lovely food is coming from in the face of severe rationing.

While these are the main mysteries of the book, it's the characters and the mechanics of everyday life during WWII in England that drives this book, as well as the series as a whole.  Martin's growing senility, teaching the Yanks how to play cricket, driving down the roads at night with no lights on because the country is in a blackout to thwart night time bombing raids.  Trying to arrange home tours to make extra money in the middle of a war. These books are all about the characters and only mostly about the mysteries.

A fun, light read that will go by quickly. 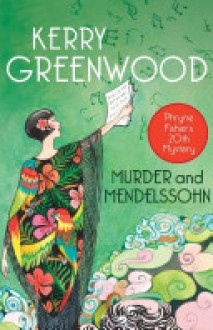 So for those who have never heard of Phryne Fisher - where to start?  A quick(ish) introduction I think.

Phryne Fisher is fabulous.  Intelligent, clever, strong, independent, confident, beautiful, rich.  With a minor title (honorable).  She is a bit like James Bond; well-educated, well-mannered, well-armed and very well-adventured.  There isn't anything she can't do.  Lethal if necessary, and with her own definition of morality.  She doesn't think twice about taking any available man that strikes her fancy to her boudoir.  Her wealth allows her the freedom to do as she pleases and what needs to be done.  She has surrounded herself with a family of her own creation - all of them saved from fates worse than death.  She is, in short, a variation of woman most women would be if they could choose to be.

A note too, about the author, Kerry Greenwood.  I've never met her and can only go by what I've read on her website, but she sounds like someone worth knowing.  She painstakingly researches what she puts in her books.  Indeed, her Phryne Fisher books are the only cozies in my library that come with bibliographies in the back.  So, entertainment and historical/cultural education.  She has chosen to frame all of the Phyrne adventures in 1929 with no chronological advancement and makes no apologies for it.  She sounds as fabulous as her creation.