Log in with Facebook
or
Wrong email address or username
Sign up
Already on BookLikes? Log in!
Incorrect verification code
Please, check your email, the code to access your BookLikes blog was sent to you already.
Enter code:
« Back Send
back to top
Search tags: hormones-everywhere

5
review 2017-06-14 22:50
Your Perfectly Pampered Menopause: Health, Beauty, and Lifestyle Advice for the Best Years of Your Life 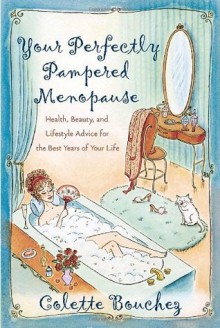 This book is exactly what I needed right now. I was looking for information about perimenopause and menopause and how to deal with the side-effects. She gives a lot of information with a little wit to keep it interesting. She explains what is happening in your body, what you can expect and what you can do to feel better. She explains pharmaceutical, natural and surgical options with the pros and cons so you can make the best decision for you. I'll be keeping this book for reference.

This is a really amazing book. While a lot of trans people I see mention it as something that would mostly help ignorant cisgender people, I think they're not giving Kailey's discussions on identity and sexuality enough credit. The first and middle parts of the book are parts I highly recommend trans men and trans-masculine people look into, especially if you consider yourself gay or preferring men, because Kailey's writing on being gay while trans, and what it means to BE a trans man, what it means to live transition to male when you cannot or do not want to relate to traditional masculinity and male gender roles, are extremely engrossing and relatable. Maybe eye-opening if you haven't thought about these issues before.

The language is obviously dated- the book was published in 2005, and even before that, Kailey came out and began his transition in 1997, at 42 years old. The language of his generation at the time of writing is what many trans people would view as offensive or incorrect now. Some of the medical aspects of transition he writes about are dated too. Keep this in mind while reading.

There are a lot of good messages to trans people in general as well.

"It might sound strange to take pride in something that has nothing to do with winning the Nobel Prize, saving a life, or discovering the cure for cancer, but cultivating self-pride is an important step for people who have been shunned, ridiculed, and basically treated just downright nastily for a long time. I've been called "sick" and I've been called "brave," but I don't believe I'm either. I'm just a person struggling to get by in this world, like everyone else, while dealing with life's little practical jokes. In my case, one of my issues, besides the fact that there's never enough money, that I'm getting older every day, and that mechanical things always break down, is that I'm a transsexual. It never goes away, just like impending death and yearly taxes. It's not a curse and I'm not a victim. It's just a fact.

We don't know why some people are trans. Maybe we'll never find out, and if we don't, does it matter? It's simply the way some people are, whatever the reason, and by taking pride in ourselves, we can take back the power that has been siphoned away from us, pick ourselves up, dust ourselves off, and move on. Let's get over it, already. The choice is ours."

Kailey was truly an amazing trans elder, who passed away at age 59 in 2014. He was a staunch advocate for trans rights and recognition, but also a lot of 'radical' opinions for someone in the 90s and early 2000s- the recognition of people outside the gender binary, the encouragement of gender non-conformity even among binary people, and the acknowledgement not everyone wants to transition or needs to transition in the same way, especially not medically. He was a very important voice for all of us. R.I.P.
Like Reblog Comment Very educational about how the body works with it's hormones and how diet can effect it. It starts with a 14 day no grain/simple.refined carb diet, then goes into stage 2 where you include 1-3 whole grains a day, plus exercise. Fat is good again, butter, coconut and olive oil ! The body needs the fat to absorb certain nutrients and utilize hormones. No, sugar, no refined carbs, no processed food, nothing you can't pronounce as far as ingredients, and to my horror no caffeine. Simple, common sense diet rules. I do believe if I ate this way I would be healthier, but give up my croissant and coffee ?? No say it's not so.
More posts
Your Dashboard view:
Reviews All Text Photo Quote Video URL Activities
Liked posts Top Tags
Press About Terms of Services Privacy Policy Contact Us Blog FAQ Patronaty medialne BookLikes for Authors Partners panel more...
Team Themes Docs API Blogs
Copyright © 2020 BookLikes