Log in with Facebook
or
Wrong email address or username
Sign up
Already on BookLikes? Log in!
Incorrect verification code
Please, check your email, the code to access your BookLikes blog was sent to you already.
Enter code:
« Back Send
back to top
Search tags: keep-hugging 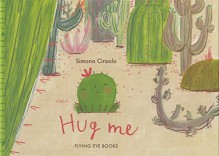 ‘They didn’t notice that all he wanted was a hug.’

A textured tactile cover and adorable pencil illustrations, but an anticlimactic ending ruined what I thought would be a resolution full of love and affection from the power of a simple hug.

Black sheep Felipe, the unloved and unwanted prickly cactus, is apt to harm anything he comes into contact with which limits the possibilities of who or what he can hug. Finally hugging a random crying rock just wasn’t as heartfelt or as meaningful as I was expecting. 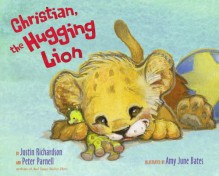 My oldest son (now three) has counted this book among his favorites for more than a year. It tells the story of Christian the lion, who became a YouTube sensation about five years ago. (I dare you to watch without tearing up!) For those not familiar with the story, two men purchase a lion cub from Harrods Department Store in the 1970s. They take him everywhere--the park, the pub, the beach--and he is a well-behaved and affectionate pet who likes to hug his people, Ace and John. But Christian grows (as lions do), and eventually Ace and John come to the (probably belated) realization that a London flat is no place for a lion. They relocate Christian to Kenya and leave him in the care of a Mr. Abramson, who helps reintegrate lions back into the wild. Several years later, Ace and John return to Kenya and find Christian, now fully grown and living in a pride, with a mate and cubs of his own. Amazingly, when Christian sees them, recognition is instantaneous, and he bounds over and nearly bowls both men over with the huge, enthusiastic hug that made him an internet celebrity.

My son loves this book because, come on, there're LIONS! On one page, after Christian gets to Kenya and sees the huge sky full of birds and smells honey blossoms on the breeze and scents gazelle in the distance, all of these new sensations tickle the adolescent cub's nose and twitch his tail and come rumbling out of his chest in a huge, loud ROAR... and this is unquestionably my toddler's favorite part, of course.

I love this book because Ace and John are two men, and while the story doesn't make a big deal about their relationship, it describes them as a family and the illustrations very subtly hint at their intimacy. There's nothing overt or sexual, of course (this is a kids' book!), but it's clear they are a couple: for example, they eat at a "romantic" restaurant with a red-checked tablecloth and a candle between them, and they go to the beach and camping and sprawl out with Christian lolling between them, wholly trusting, like a child with his parents. So many other kids' books about LGBT families are so overt about it, because that family structure is the point of the story. There is a place for that, sure, but I appreciate that Christian the Hugging Lion just presents Ace and John as they are, without comment, and the very lack of discussion or spotlight serves to normalize their relationship. It's just not that big a deal, which is the take-home lesson I'd like to sink in for my two boys, since they have two mommas.

I also love Amy June Bates' illustrations. They are so colorful and playful, and so period appropriate. Remember, Ace and John adopted Christian in the 1970s: they have long, hippie hair and bellbottom jeans, and they drive a giant yacht of a convertible.

A couple of books have already been published about Christian the Lion but this telling is warm and inviting. The two wordless spreads showing Christian, Ace, and John are wonderful.
Like Reblog Comment 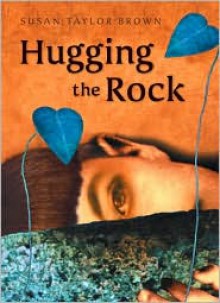 This book is not for people who need sunshine and joy in their books, not that those subjects are EVER in novels-in-verse. I wouldn't even give this to people who loved Sharon Creech's "Heartbeat." This book is basically one emotional punch to the stomach after another after another for most of its length, and even after the constant punching subsides it's still pretty sad. Regardless, I wanted to hug this short little book, with its detailed, sad writing, and I would rank it just a bit below "Out of the Dust," my favorite novel-in-verse ever. This rock is a diamond.
More posts
Your Dashboard view:
Reviews All Text Photo Quote Video URL Activities
Liked posts Top Tags
Press About Terms of Services Privacy Policy Contact Us Blog FAQ Patronaty medialne BookLikes for Authors Partners panel more...
Team Themes Docs API Blogs
Copyright © 2022 BookLikes