Log in with Facebook
or
Wrong email address or username
Sign up
Already on BookLikes? Log in!
Incorrect verification code
Please, check your email, the code to access your BookLikes blog was sent to you already.
Enter code:
« Back Send
back to top
Search tags: kelly-coon 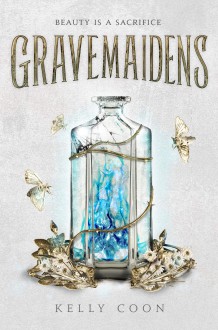 The start of a fierce fantasy duology about three maidens who are chosen for their land's greatest honor...and one girl determined to save her sister from the grave.

In the walled city-state of Alu, Kammani wants nothing more than to become the accomplished healer her father used to be before her family was cast out of their privileged life in shame.

When Alu's ruler falls deathly ill, Kammani’s beautiful little sister, Nanaea, is chosen as one of three sacred maidens to join him in the afterlife. It’s an honor. A tradition. And Nanaea believes it is her chance to live an even grander life than the one that was stolen from her.

But Kammani sees the selection for what it really is—a death sentence.

Desperate to save her sister, Kammani schemes her way into the palace to heal the ruler. There she discovers more danger lurking in the sand-stone corridors than she could have ever imagined and that her own life—and heart—are at stake. But Kammani will stop at nothing to dig up the palace’s buried secrets even if it means sacrificing everything…including herself.

This was a good first book in a series (duology). To be honest, this book I cover-shopped. I saw the beautiful cover and had to read the book. Luckily I enjoyed the book.

I really enjoyed the world and work building and the story just as much.

As some have stated before it is quite brutal and has some graphic scene in there, so if you have a weak stomach skip it or just skim these parts.

The only thing for me that I didn’t like was, that parts of the book were slow, even in the beginning and it made it hard for me to connect to some characters.

I wasn’t sure if I would like Kammani or not in the beginning and she just comes over as annoying and jealous brat, but I ended up liking her for the most part.

Overall I enjoyed the book and I’m looking forward to the second book to see what is to come.

Le'ts see how far that will go

I'm struggling with this... I like it .. a lot actually but its so slow