Log in with Facebook
or
Wrong email address or username
Sign up
Already on BookLikes? Log in!
Incorrect verification code
Please, check your email, the code to access your BookLikes blog was sent to you already.
Enter code:
« Back Send
back to top
Search tags: lordgoverness 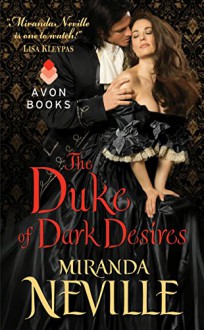 I picked this up because of this rave review at SmartBitchesTrashyBooks.com, but I didn't love it. I hadn't read the prior books in the series, which may have helped me warm up to the hero faster than I did, but I didn't have any trouble understanding the plot.

As you can tell from the publisher's blurb, the plot here is driven by the ultimate angsty conflict: the heroine's parents and sisters went to the guillotine during the French Revolution, and she has sworn to avenge their deaths by killing the Englishman who betrayed them to authorities... and of course, the hero is that man. At the start of the book, all Jane/Jeanne knows is the man's last name, Fortescue, so she poses as a governess to the sisters of the Duke of Denford, the head of the Fortescue family, in hopes of learning which of his relatives is the betrayer.

Julian, the Duke, comes across as a real douchenozzle at first. (Again, if I'd read the previous books in the series, in which he makes several appearances, I might have had a better initial impression of him.) He resents and ignores his three half-sisters, who have been abandoned by their mother into his care. He asks his neighbor (a married woman he apparently attempted to seduce in a prior book) to hire someone to look after them, and when she refuses, he advertises the position himself. However, he cares not at all about the suitability of the candidate; in fact, when he hires Jane, he cares nothing of her qualifications as a governess and only about her qualifications as his mistress. When she takes up the position, he blackmails her for kisses, refusing to keep promises to his sisters unless Jane submits to his advances.

That blackmail is even more skeevy and disturbing given Jane's history (which of course Julian, in his defense, doesn't know): Jane is no stranger to sexual coercion. When her family was captured when she was just 15, she escaped the guillotine only because the military official who arrested them took a shine to her, and offered her the opportunity to become his lover in order to save her skin.

However, for all of his douchey machinations and manipulations, Jane is the one to ultimately seduce Julian into bed. At that point in the story I still didn't really see the appeal, but she's French and enjoys sex (and okay, I do enjoy sexually-liberated heroines in historical romance, even if they're not very historically accurate), so whatever.

As their relationship develops, Julian does begin to be a better man. He takes more interest in his sisters and starts to consider their needs and feelings. He adores Jane (the suddenness and fervor of his feelings felt a little Insta-Lovey), though he doesn't trust her. Even without knowing that Jane was the person most impacted by his youthful mistakes as a young man in Paris--mistakes which culminated in the deaths of an entire aristocratic family--he seeks to expiate his conscience by turning the art collection he bought from that doomed family into a national treasure that can be enjoyed by the public instead of a privileged few.

With the sort of poetic irony often found in romance novels, both Jane and Julian individually decide they are each ready to share their secrets with the other, but before they have the chance, the exhibition of Julian's art collection (which of course Jane recognizes) brings the plot's conflict from a rolling boil to a dangerous conflagration. It is a testament to Julian's redemption that by that point I liked him enough to root for him to find a way to unravel the mess he'd made in order to have a happy ending with Jane, and I thoroughly enjoyed the last third of the book much, much more than I liked the first two thirds.

If you like a good redemption story, this one is worth checking out. 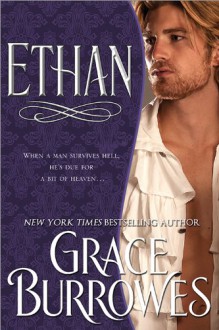 I'd never read anything by Grace Burrowes before, but I liked Ethan despite its lord-and-governess trope--I'm not a big fan of lord/governess, boss/secretary, teacher/student romances; I just find the skewed power dynamic to be too skeevy. This one works, though (at least for me), because Ethan is a beta hero who doesn't throw his authority around, and Alice isn't poor and desperate the way governesses usually are, so the power dynamic didn't feel that skewed.

Ethan is the bastard son of a recently deceased earl. In childhood, he was close to his half-brother, Nicholas, but a misunderstanding caused the earl to send Ethan away to public school where A Very Bad Thing happened to him. (If you read the book, be warned: here there be Triggers.) He grew up a little bit damaged, and then got suckered into a bad marriage by a bad woman who gave birth to two sons (not necessarily his) before she died. When this story begins, Ethan is just beginning to reconnect with his brother Nick, and just learning how to be a parent to these boys.

That's where Alice comes in. She's a friend of Nick's and about to leave employment with another family, and Ethan decides she's just what his boys need. Alice is the youngest daughter of an aristocratic family; she could have married, but because of a tragedy in her past, she is determined to be independent -- thus, she works as a governess. She has a family and a home and a fortune, but she works because she wants to -- which is probably not very historically accurate, but that sort of thing never bothers me like it does some.

I was sort of annoyed that there's a bunch of foreshadowing throughout the first half to two-thirds of the book about the Tragedies in both characters' pasts, and the big reveal came too late for my tastes (and was a little bit absurd in that the same villain is responsible for both misdeeds, but hey, this is Romancelandia, right? You've got to expect some WTFery). Other than that, though, this romance was emotionally rich and just lovely: both Alice and Ethan are intelligent, sympathetic, caring people who have both been lonely for a long time, and who have both resigned themselves to being alone. It's kind of lovely to watch them fall for one another. So many romances build conflict with characters who are determined not to fall in love, not to give their hearts, but Alice and Ethan fall in love slowly but honestly. Each acknowledges their own slide into love, and doesn't fight it, but each is afraid to burden the other with their feelings for fear that depth of emotion (and the responsibilities that come with being loved) will be unwelcome or unreciprocated.

I thought Burrowes did a pretty good job of dealing with the emotional aftermath of Ethan's rape. Though it happened years ago when he was still a teenager, he still has a lot of baggage to unpack, and Burrowes handles it all in a way that is realistic and sometimes emotionally raw, but ultimately very redemptive. I also like that, although the guy who raped Ethan is (quite rightly) the villain of the tale, Burrowes avoids the trap (or trope, unfortunately -- it's such a common device) of implying that ALL gay or bisexual men are evil predators. Ethan and Nick have a younger brother who is gay and is going to the Continent to avoid the risk of being hanged in England for his sexual proclivities. Although this brother is hardly central to the plot, his appearance -- glancing though it is -- allows Ethan the opportunity to defend his brother, put his faith in him by trusting him with family business in France, and make it clear that his anger is toward the man who violated him, and not toward all gay men.

There is a child in peril plot (involving the very same villain, surprise surprise) that I could have done without, though I get that it serves to connect the old conflicts suffered by Ethan and Alice to present-day events in the story. Since I became a mom, child in peril plots bother me more than they ever did before, and I tend to resent that emotional manipulation. Thankfully, this plot doesn't go far enough for the children to actually be harmed.

Minor quibbles: 1) It's revealed midway through the book that 'Alice' isn't Alice's real name, and from then on Ethan called her both Alice and her other name randomly and interchangeably, a complication I could have done without. 2) I had a couple of moments of plot confusion, because Ethan falls in the middle of a series of other books I have not read, and there were minor characters introduced who were probably more familiar to more loyal Borrowes readers. Mostly, though, this worked as a stand alone, and Ethan and Alice were very compelling characters with a very compelling romance.