Log in with Facebook
or
Wrong email address or username
Sign up
Already on BookLikes? Log in!
Incorrect verification code
Please, check your email, the code to access your BookLikes blog was sent to you already.
Enter code:
« Back Send
back to top
Search tags: meljean-brook I am relatively sure the only reason I bought this was the Alyssa Day. I'm equally sure I waited until I found it cheap.

The LL... Thoughtful look. It's been a long time since I read a Breeds book. The inability to keep anyone/thing straight was maddening to this somewhat ocd reader. The "heroes" who were more controlling alphhole than alpha didn't help. Her short stories are generally easier for me to digest, and this one is no exception. The h - recessive breed - figures out what she is when her breed genetics suddenly kick in and she ends up in the ER. How she ended up like this is not really answered satisfactorily - either her grandfather was a douche who schemed to get his son's and his son's wife's eggs/sperm from a fertility clinic for malicious reasons, or the old saying that the road to hell is paved with good intentions holds true. The story gives you the feeling the author couldn't make up her mind...or changed it. Whatever the case, the h is rescued from an assassination attempt, and she is separated from her parents. As to the why of that, well, we're never told but knowing how the breed mind seems to be written, it seems a deliberate attempt to force her into the fold. The H is somewhat aware of his attraction but is put off by her age and doesn't want her around. She forces the issue and other than one kidnapping attempt, they spend the rest of the book boinking. Out of the bedroom, the rest of this group of merry men (and Jonas is absent as they seem to be a group of security folks who only vaguely answer to him when they feel like it) are playing head games with each other and the would-be kidnapper.

The Alyssa Day contribution... too short I thought. I wanted to read more about the h and H. This is probably a good thing.

Meljean Brooke... I've read a couple of novellas from this series, and have the first book in Mt TBR. I'm still unconvinced though as to the appeal of steampunk. And well, in light of everything, I can't help but wonder why the H, as soon as he figured out the bad guy was going to kill them anyway, didn't act then. Or how the bad guy knew he survived, or HOW he survived for that matter.

Originally published at midureads.wordpress.com on March 3, 2018. 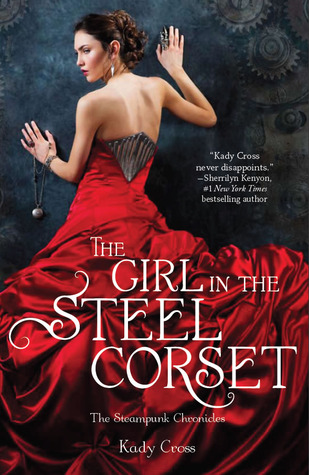 The Girl in the Steel Corset by Kady Cross

I don't much remember what went on in this book, except there being a plot to replace the Queen with an automaton clone. Must have made an impression on me because I rated it 4 stars on GR. Oh, and the covers in the series are beautiful! I recently and reviewed the second book in this series. 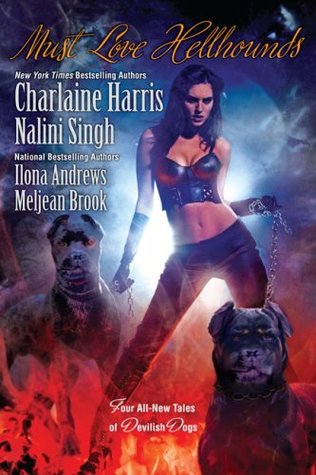 Must Love Hellhounds by Various Authors

GR tells me that I loved most of the stories from this anthology. Must have been a good collection. I remember trying it out because it also included a story by Ilona Andrews -- a favorite author couple of mine. 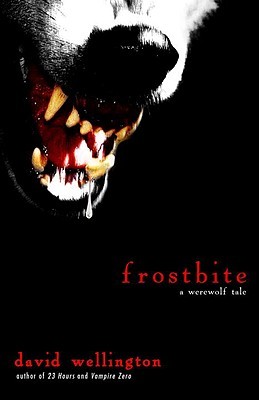 If you don't yet know that an awesome vampire series by David Wellington's exists, then you haven't been paying attention. Like the Laura Caxton series, this one is creepy AF. My GR review tells me I recommend it to:

I loved it and I don't even like horror much! Here, let my gushing adoration convince you that you need to try Wellington's books. 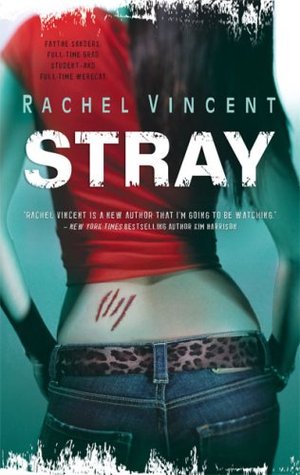 When I first read it, one of the most annoying things about this series was its heroine. She was a whiny, selfish brat who didn't care about the consequences of her action. One of the best things about it, as I continued to plod along, is how she changed! By the end of the series, the events have transformed her into the alpha her father always knew her to be. If that doesn't float your boat, maybe stay for all the violence and the gore? Oh, and did I mention that the series is complete? You can binge read it! 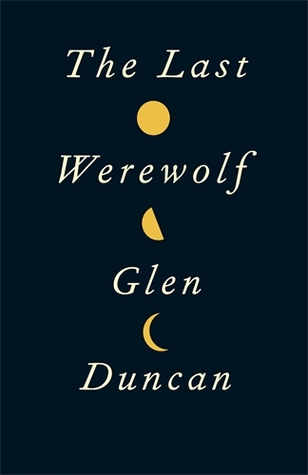 The Last Werewolf by Glen Duncan

Maybe I have a soft spot for tortured, lonely werewolves or maybe it's something else. Either way, I just completed this series. While the first had impressed me, the second and third fell short. All I'm saying is that even with the cliffhanger at the end of the first one, it can easily be read as a standalone.

I have had much to say about the second book in this series on this blog. All good things, I promise. Therefore, it won't come as a surprise that I loved the first one, as well! The ending blew me away even when I have become so jaded about last-minute twists that change everything. Check this one out! 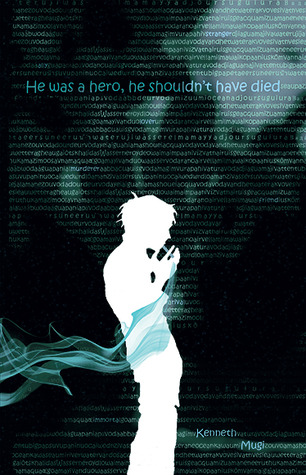 He was a Hero, He Shouldn't have Died by Kenneth Mugi

If you asked me to describe this book in a word, I'd probably say weird. But wait, this is what I said in my review:

I got this book for free, in exchange for an honest review from Making Connections. Get your copy here.

This book is very different from the plethora of Paranormal novels out there- it turns the idea of Dorian Gray’s picture on its head.

What I really liked about it was that the touch of fantasy/paranormal elements didn’t overwhelm Kasumi’s story.

Another thing to like was that if the new edited version had any errors, I couldn’t find them.

There is enough humor to balance the darkness in the story.

I would have liked to see more of Morgan but watching Kasumi grow into her powers would be exciting too.

Hoping that there are some fight scenes in the next book!

This book isn’t for everybody but if you’d like to read something unique, give this one a whirl. 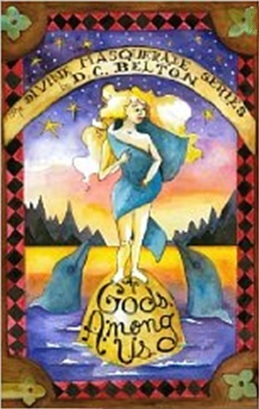 The Gods Among Us by D.C. Belton

An old read, an old review:

The author was kind enough to give me a free review copy.

You know those books that you just don't wanna put down? Not because there's something exciting happening in the story or it is a good story...not only that but mostly because the writing flows and the story is being told so smoothly that you just read on and on. This book was such a book.

The parts I loved the most began when Pallas is aboard the ship and meets the crew. Their humor, lightheartedness and loyalty towards each other made them lovable.

I also liked that we're set up to hate Elena in the beginning of the story but we find out she has more depth and understands political intrigue much better than her younger sisters give her credit for.

Othello, I feared and hated just like I was supposed to. Even when I laughed at his antics, I wasn't less creeped out by him! 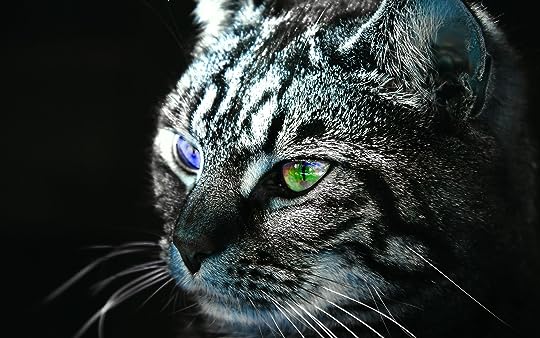 About the gods and their machinations: a) I'm not yet sure if they're actually deities and not humans who know what opposable thumbs are, b) they just don't care whose life they ruin, do they? Even Pallas who claims not to believe in gods & goddesses can't escape their schemes!

Pallas keeps mentioning how her father must miss her and I couldn't shake the feeling that there's something wrong there. Poor Pallas!

What would have made the book even better was a little more world building, maybe? Or a map, so we could understand what this world is like even better.

Lovely, fun at times and sad at other times, quirky as heck read. I liked it, maybe you would too?

Well, those were my faves from the past years. You can also find reviews of books from 2018 that stuck with me. This is a short story about Mina and Rhys' marriage and how they both need to do their jobs even with the dangers. I loved how they are still hot for each other but to me - what was it 6 or 7 encounters in detail - it was a little much, and I like sex scenes! One of my favorite series. A rather enjoyable read, even if it was at times a tad ridiculous.

The only way I think I could have enjoyed this more is if some sections (not many) were rewritten in a less confusing manner, this includes some characters I found impossible to keep track of. The 2nd thing being the main male character was a pretty big douche, if he had been more likable I might have rated this book higher. Still kudos to Brook because in the end I was rooting for him and Mina, so I obviously started liking him somewhere throughout the book. Credit for this is mainly because Mina liked him and the chick is pretty amazing, and partly because he admired her for her intelligence and wit above everything else. So he was a complete unlikable monster. Plus I'll admit the banter between the two MC's was hilarious, without going into dimwit land, which I appreciate. I'm glad there were 2 POVs otherwise I don't think this story could have been pulled off with just one. Although I could have lived without the chapter worth of sex scene's, good on you guys for discovering your genitalia, the rest of us don't need to be as invested in it as you guys are.

Overall an entertaining read. The world, politics, bugger concerns, plus the female MC made this book. I am a little confused about what an actual Horde looks like, and at the beginning of the book I was beyond lost when referencing to buggers and Hordes but soon enough I was fascinated by the unusual world, their strange hierarchy and found myself quickly immersed within the pages.