Log in with Facebook
or
Wrong email address or username
Sign up
Already on BookLikes? Log in!
Incorrect verification code
Please, check your email, the code to access your BookLikes blog was sent to you already.
Enter code:
« Back Send
back to top
Search tags: moshe

When travelling through Greece this summer, I've visited Mount Olympus, once considered as the home of the Greek Gods of the Hellenistic World. In classical mythology, it is Mount Athos in Greece where the Thracian giant battled Poseidon, god of the Sea. Check Ancient Temples and Fire Stolen from Gods.

Still considered very sacred, this area today hosts Christian Orthodox Monasteries and the Greek Sacred Mount called Hilandar, run by Serbian and Greek monks, hosting Orthodox Christian Monks from all over the world, accessable only to the male spiritual seakers. The God Vibration Read from January 13, 2013 to November 09, 2015
Description: This was the first comprehensive history of Palestine from the Muslim conquest in 634 to that of the Crusaders in 1099. It is a 1992 translation and revised version of volume I of Palestine During the First Muslim Period which was published in Hebrew in 1983 and presents an authoritative survey of the early mediaeval Islamic and Jewish worlds. Based on an impressive array of sources including documents from the Cairo Geniza collection, the author examines the lives of the Jewish, Christian and Muslim communities of Palestine against a background of the political and military events of the period. Specific attention is paid to the history of Palestinian Jews under Muslim rule. An essential resource for students and specialists of mediaeval Islamic and Jewish history, religious studies and for anyone interested in the history of the Holy Land.

Opening: The Muslim conquest of Palestine was not an expeditious event, at any rate not in present-day terms.

Cor Blimey Missus! This is huge, dense, scholarly and, let's face it, completely off-putting. Until you get into it that is, and if you skim through to the chapters you are really interested in learning about, Gil's breeze block is probably the best there is on the subject.

This history is dripping with buboes and blood. 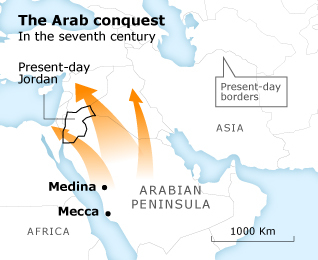 The Battle of Yarmouk 636AD

From wiki: The Battle of Yarmouk was a major battle between the army of the Byzantine Empire and the Muslim Arab forces of the Rashidun Caliphate. The battle consisted of a series of engagements that lasted for six days in August 636, near the Yarmouk River, along what today are the borders of Syria–Jordan and Syria–Israel, east of the Sea of Galilee. The result of the battle was a complete Muslim victory which ended Byzantine rule in Syria. The Battle of Yarmouk is regarded as one of the most decisive battles in military history, and it marked the first great wave of Islamic conquests after the death of Muhammad, heralding the rapid advance of Islam into the then Christian Levant.

691: the Umayyad caliph Abd al-Malik commissioned the construction of the Dome of the Rock over a large outcropping of bedrock on the Temple Mount.

747: Devastating earthquake where the eastern and western sides of the Dome of the Rock collapsed.

789: during the days of the Abbasid caliph HZriin al-Rashid, a
pool was built in Randa 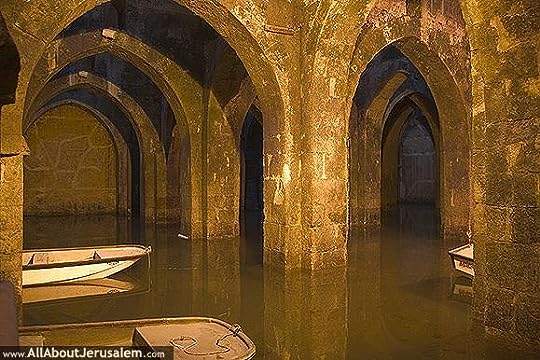 1036-38: TRUCE WITH BYZANTIUM to enable rebuilding of churches destroyed under Fatamid occupation

CR White Mughals
5* A History of England from the Tudors to the Stuarts
3* Rome and the Barbarians
4* Field Notes From A Hidden City
3* The King's Jews: Money, Massacre and Exodus in Medieval England
5* A History of Palestine 634-1099
3* Charlotte Brontë: A Life
3* The Alhambra
5* A Long Walk in the Himalaya: A Trek from the Ganges to Kashmir
3* Buddhist Warfare
4* A Gathering of Spoons
AB A Brief History of Roman Britain - Conquest and Civilization
4* Victorian Glassworlds: Glass Culture and the Imagination, 1830-1880
3* Food Safari
4* She-Wolves
3* India: A Portrait
2* The Archaeology of Ancient Sicily
5* Classics of Russian Literature
CR The Battle of Salamis
Like Reblog Comment Leonardo Ramirez's Haven of Dante: The Staff of Moishe is a very unusual book. Part sci-fi, part religious fiction, and part high fantasy, the story takes may twists and turns.

The Dante family's epic history falls to Haven Dante who must save the world from the creatures of the 9 levels of hell. Full of danger, the dead-beat (in personality) dad is irritating and horrible enough that you want to report him to CPS.

The one drawback of the book is that each chapter feels more like a separate book. Sometimes, a chapter based largely in the distant past is followed by one based far into the future and it left me feeling a little discombobulated.

Still though, Haven of Dante is definitely a read if you are looking for something different.
Like Reblog Comment

A great fantasy novel, just a bit too religious for me.

After having read this fantasy novel I must say I was pleasantly surprised and annoyed at the same time.

Why? Well, the fantasy elements were very well done by this author which made it a great read, but there are some hiccups in names (mixed up at some scenes. Haven becomes Sol, Soledad becomes another name, all of that threw me out of the story). And then there are other continuity issues that were solved by ‘miracles’.

I guess that’s where my annoyance comes in play, because the miracles and explanations of certain things lean heavily on biblical references and, as you all might know, I don’t ‘do’ religion, and rarely ever read or enjoy books that are very much based on faith.

So, however great the fantasy elements are in Haven of Dante, because of the prominent religious elements this book isn’t one I’d read again. The subtitle of this book pretty well describes what it’s about, so there’s no need for me to repeat it here. The question I kept asking myself while listening to the audio of this book was, “Will this foster within me a sense of empathy for the young graffiti artists, vandals and wearers of low baggy pants who roam my neighborhood? The answer is, “Not much.” But it does remind me that it’s always possible that those sorts of young people can grow up to be something other than a criminal. Perhaps a small possibility, but anything is possible.

This book is a memoir of a man named Moshe Kasher who as a kid did many disgusting things including stealing from this mother and grandmother, marking graffiti on wall of his family’s house, being too lazy to walk down the hallway to pee, repeatedly flunking out of schools, etc. I kept imagining how bad I would feel if I had a son who was this screwed up. One has to wonder how much of this sort of behavior is caused by genes and how much environment? The author had an older brother who was a model student and earned an academic scholarship to college, so the environment couldn’t have been too bad.

As miserable as this may sound, the audio version of this book was surprisingly entertaining to listen to. The author is a standup comedian, and he is also the reader for the audio version of the book. He includes all the comic timing, pauses and voice impersonations that one can expect from a successful comic. So while I kept shaking my head in disbelief at the awful lows he sank to as a juvenile dope addict, I also was laughing at the way it was being described.

But as one can expect from most popular comedians, the language gets a bit raunchy. There’s no bleeping of the unmentionable words so I don’t recommend this book for readers with sensitive feelings. But if you can go with the flow the book is very entertaining.

Of course, one of the reasons that the book is tolerable is the fact that the reader knows that the author lived to adulthood because he wrote the book (and recorded the audio of it). But in the epilogue he reviews what happened to many of his friends from this era of his life, and it’s not a happy end in many cases. It’s clear that if he had not managed to “make a right turn in his life,” he was headed for a life of crime and/or early death.