Log in with Facebook
or
Wrong email address or username
Sign up
Already on BookLikes? Log in!
Incorrect verification code
Please, check your email, the code to access your BookLikes blog was sent to you already.
Enter code:
« Back Send
back to top
Search tags: my-friends-can-beat-up-your-friends 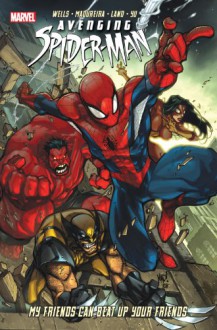 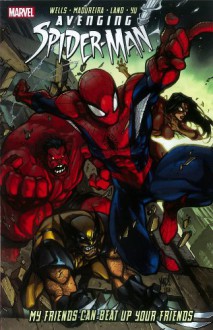 Avenging Spider-Man is the team-up series: it throws Spider-Man together with another character - so far, all Avengers, and all single characters - and sees what happens.   It's pretty revelatory as far as characters go.

In the first storyline, it delves into Spider-Man's place on the team, which Red Hulk - or Rulk, as Spider-Man calls him at one point - questions.   Often.   And loudly.   It shows that his band of fighting, and even his sense of humor, do unquestionably do the team a solid service.    This is a three issue arc, too, and the longest story in this collection.  The other two are one-shots, and in my opinion, far stronger stories as the first was excellent, but slightly dragged out.

I'm going to talk about the last story next, because I have more to say about the one in the middle.   The last is a Captain America story that delves into Steve Rogers, and his history, including what he wanted to do as a child.   He's so antagonistic about it all that it was a bit of a turn off, but it all paid off in the end.   I squeed a little at that last scene.

But Hawkeye was the real standout in this series.  His story shone some light on why he is the way he is: why he's always training, why he has less of a life than the others.   He's always training because he has to work so hard for what got him, and keeps him, on the team.

He has to work hard, he has to be at the top of his game - always.   The pressure is enormous.   No wonder he's a snotty little asshole sometimes. Just like the Red Hulk story - and even the Cap story - this goes from them having very little common ground, to revelations making one of the characters understand the other.   This could get dull, but the way the revelations peel back and the way the characters come to understand and help each other out are so different, and so touching, that I can't help but want to read more.

In addition, it's pretty damn funny.

And I might have teared up a little at the end of the Hawkeye issue.   That one really hit me in all my feels. Okay, this one is kinda out of place, but... aren't they all in positions where they might get concussed quite often?   Why don't more superheroes wear helmets?