Log in with Facebook
or
Wrong email address or username
Sign up
Already on BookLikes? Log in!
Incorrect verification code
Please, check your email, the code to access your BookLikes blog was sent to you already.
Enter code:
« Back Send
back to top
Search tags: new-to-me-author 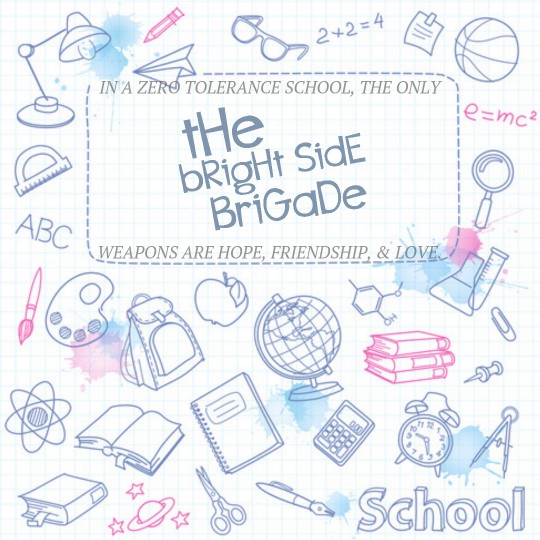 The Bright Side Brigade, by Elaine White

The Bright Side Brigade

In a zero tolerance school, the only weapons are hope, friendship, and love. 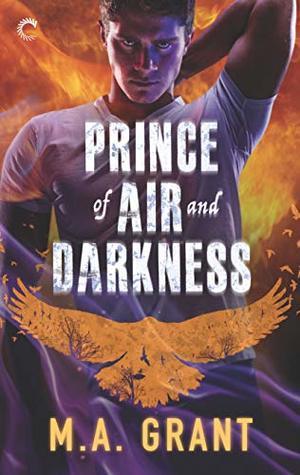 Prince of Air and Darkness, by M.A. Grant

Prince of Air and Darkness, by M.A. Grant

"Phineas Smith has been cursed with a power no one could control.

Roark Lyne is his worst enemy and his only hope.

The only human student at Mather’s School of Magick, Phineas Smith has a target on his back. Born with the rare ability to tap into unlimited magick, he finds both Faerie Courts want his allegiance—and will do anything to get it.

They don’t realize he can’t levitate a feather, much less defend the Faerie Realm as it slips into civil war.

Unseelie Prince Roark Lyne, Phineas’s roommate—and self-proclaimed arch nemesis—is beautiful and brave and a pain in the ass. Phineas can’t begin to sort through their six years of sexual tension masquerading as mutual dislike. But Roark is also the only one able to help Finn tame his magick.

Trusting Roark’s mysterious motives may be foolish; not accepting his temporary protection would be deadly.

Caught in the middle of the impending war, Phineas and Roark forge a dangerous alliance. And as the walls between them crumble, Phineas realizes that Roark isn’t the monster he’d imagined. But their growing intimacy threatens to expose a secret that could either turn the tide of the war…or destroy them both." 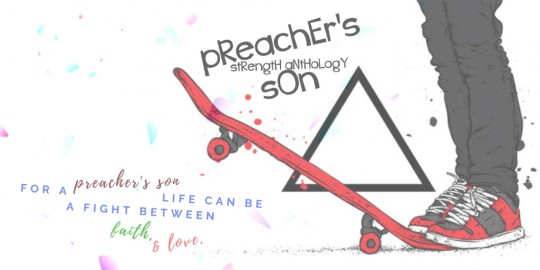 Part of the 'Strength' Anthology 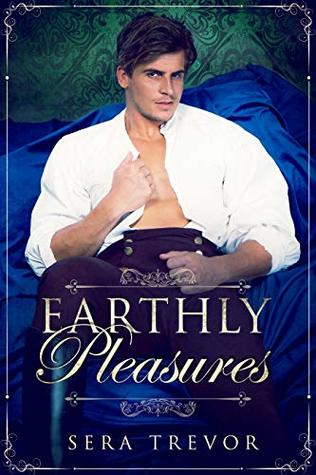 "Prince Paurick is a hedonistic degenerate—or at least that’s what his father and the rest of the royal family thinks of him, and he’s happy to live down to their expectations. But when the crops of their kingdom start failing, the king commands that Paurick be joined to Brother Laurel, a monk, in order to combine Paurick’s royal magic with that of the Goddess, and thus bring fertility back to the land. The union is only meant to be temporary, but Brother Laurel is so ugly and prudish that it might as well be an eternity. However, as they get to know one another, Paurick realizes he has misjudged Laurel and finds himself falling for the thoughtful and sensitive young man. The fate of the kingdom relies on their sexual union, but as time goes on, it becomes clear that the fate of their hearts is in jeopardy as well."


This book grabbed me right from the start. I was caught by the cover, the title, then the blurb. In that order. And once I started reading, I hated to put it down for a single second.

Earthly Pleasures is a sweet seduction. Though there's debauchery and sex almost immediately, it's not in an overbearing way, nor is it utterly explicit until a few chapters in. The story is actually a slow burning romance between Prince Paurick and Brother Laurel, an acolyte chosen by his High Priestess to perform a duty for the Goddess. Being thrown together – one wayward, roguish prince, and one pious, virginous priest – should spell disaster. And at first, it does. But then they begin to get to know each other and that's where the magic happens.

A unique slice of historical fantasy, that has just a touch of magic and whole lot of lovin' was exactly what I needed when I started this book. It's one of those that has a pretty cover, an intriguing title, and interesting characters – then you read the book and you discover a whole hidden depth to all of it. It's the kind of book that – when you realise what the title really means, and you realise what the cover symbolises, and you dig deep into the characters – captures every inch of your heart, all over again. The story so far pales in comparison to what you learn as you keep reading and begin to truly understand what it all means.

Though Paurick came across as hedonistic, I utterly loved the way that he treated Laurel, right from the start. While Laurel wanted to do his duty and get it over with, he was a naive virgin and didn't have a clue what it really entailed. The fact that Paurick, despite his reputation, insisted they wait and tried to seduce Laurel until he more comfortable and consenting, was beautiful. If he'd have taken Laurel when he was so clearly terrified, I could never have believed in another moment of their relationship. But, I didn't have to worry. All throughout the book, Paurick found a new side of himself that even he never knew existed, and that meant taking care of Laurel, lavishing him with time and attention and care, the way no one ever had. It made it possible for them to have a sexual relationship but still have a beautiful, slow burn of chemistry and romance.

The sweetest part, for me, was the necklace. I thought it was such a beautiful gift and it really showed the growth in both characters, when you saw how they reacted to it. It really emphasised how much they had changed, but it also proved true to how they'd become with each other – they always talked through their problems, their arguments. Even if they didn't turn out okay in the end, they had a real, open, honest communication with each other.

In fact, the growth of the characters is as big a plot point as the romance itself. Without that personal growth, that realisation of what they had been before and what they wanted to be, the romance wouldn't have been possible. Both men were so stuck in their ways until they were forced into each other's company, and found that things weren't always what they seemed. They both changed perceptions, opinions, expectations, and how they viewed themselves as well as the world.

When it comes to the secondary characters, Rion was a royal ass, Lyam was a bit too focused on his position and Egon was simply brilliant. They were real and fleshed out, beautifully represented, even right down to Granny, Lir, the High Priestess and Sister Telme. No one character was so unimportant as to not warrant a unique, well explored personality that didn't infringe upon the main story, but added to it and helped the two main characters find their way.

Though I would have loved for Laurel to find the necklace again at the end, or for the Goddess to return it to them maybe, it's the only issue I had with the plotting. I loved everything else about the story. There are a couple of editing issues, very minor and barely more than a word missing from a sentence, perhaps once every 30% of the book. That's how minimal it was, and it didn't at all ruin the flow or the understanding enough to affect my rating.

Overall, Earthly Pleasures was a beautiful story about love, growth, faith, and not judging others by their outward appearance. The beautiful thing about Paurick and Laurel isn't just their romance, but the fact that they don't change for each other, they don't seduce each other, and they don't compromise who they are for each other. They simply find in each other something they never knew they wanted or needed. And they're strong enough to accept that, to embrace it, and to welcome the love that falls into their laps, by the grace of the Goddess.

“Laurel bit his lip. “I’ve done nothing but insult you. Why would you be kind to me at all?”
“It so happens that I enjoy it when lads are a little mean. There are very few people who have the courage to be rude to a prince. I find it rather refreshing.”
Was he really serious? Laurel pulled away. He couldn’t think clearly when the prince was around. “I would like some time alone.”
The prince dramatically clapped his hands over his heart, as if struck by an arrow. “Oh yes, that’s perfect. You’re driving me wild! Now tell me that you find my company intolerable.”
Laurel paused. “But I don’t.” And it was true. He didn’t anymore.
The prince smiled. “Then we are making progress.””

“He felt like he was dying. Perhaps he was. The palace felt like a tomb now, with Paurick a mummified prince, doomed forever to be surrounded by luxury he could never truly enjoy. It was all pointless without someone to share it with. He understood that now.”" 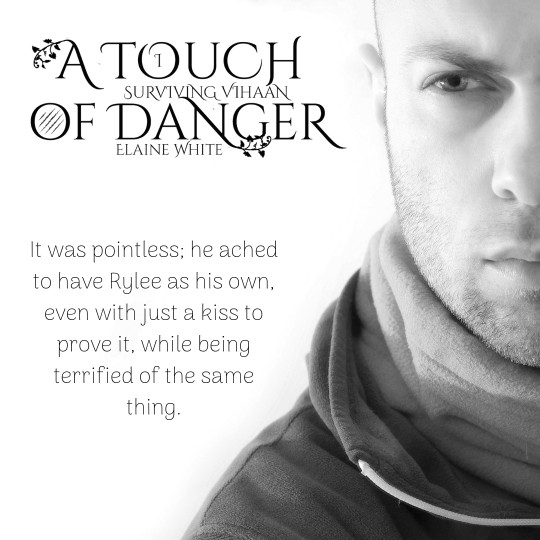 A Touch of Danger, by Elaine White

A Touch of Danger