Log in with Facebook
or
Wrong email address or username
Sign up
Already on BookLikes? Log in!
Incorrect verification code
Please, check your email, the code to access your BookLikes blog was sent to you already.
Enter code:
« Back Send
back to top
Search tags: outhouses Opening Line: “Destry Poindexter was beating the hell out of his wife, Lucy.”

I always struggle with Sharon Sala/Dinah McCall. Some of her books I've enjoyed others I've not even finished, -all have a high cheese factor. This one had a great premise, a follow through that I wasn't expecting (and not in a good way) with main characters becoming secondary and an over the top maniacal bad guy. Some of the dialogue in this was also laughably old fashioned and or just plain ridiculous with love scenes the same. The following being almost unreadable.

"When they began the dance of love, time stopped. All sense of themselves as individuals became lost in the act of making love. The room stood in darkness but was tempered in warmth." *Gag*

She also had her heroine spout sexist comments like "I feel really terrible for being such a burden to everyone. I haven't lifted a finger to cook or clean since I entered the house."

The heroine has just survived a plane crash, spent days lost in the snowy wilderness being chased by the bad guy, had surgery to remove part of the plane from her back and, it’s not even her house! But hey, come on, she didn't cook or clean!

And then with about 50 pages to go, just when I thought I was going to make it to the end she killed the dog. Note to authors Don't Kill The Dog! They must know it infuriates and alienates readers, I threw the damn book. Outside. So anyways this was a DNF and I'm done with McCall/Sala. Opening Line: "Marcie Sullivan drove into the small town, her sixth small mountian town of the day, and found herself face-to-face with a Christmas tree trimming."

AVRC is my first Robyn Carr book which would make me...you guessed it, a Robyn Carr virgin. Anyways, this isn’t the type of contemporary romance I usually read (I like a bit of action, suspense or the occasional vampire in my mix) However the Virgin River series is so hugely popular and was recommended to me by a ton of people so I just had to check it out. 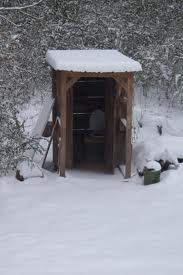 ...And I’m happy to say that except for the author’s unusual fixation with an outhouse I got sucked right into this heart tugging romance. Enough so that I didn’t want to read anything else when I finished and have gone back to start the series at the beginning.

Yes this is book #4 in a series of 13 (and counting) however that doesn't seem to have any bearing on this particular story (I think because it’s a special Christmas edition). Sure there were a few characters I might have enjoyed more if I’d know their ‘story’ but this stood just fine on its own and centered pretty much solely on Ian and Marcie’s heartbreaking journey of love and healing.

The best word I could use to describe Robyn Carr’s writing is comfortable. It’s just relaxed and easy and felt like I was reading about friends or I imagine if you’re well into the series like coming home. Carr never once had me shaking my head thinking that’s wrong or ridiculous or the H/h would never do that. The story flows very well too, is funny in parts and heart wrenching in others and except for letting the outhouse become a character of its own, left me wanting more. I feel like Carr could become the sort of author I’d pick up when nothing else is striking my fancy and know that I’d enjoy it.

Marcie Sullivan is looking for closure; she’s come to Virgin River to find her husbands Sergeant and best friend. The man responsible for saving Bobby in Iraq and giving her three years to say goodbye while he slowly died from his battle injuries. As Marcie cared for her husband she forged a friendship (through letters) with his sergeant Ian, pouring out her heart, frustrations and sadness to a man she’d never met. Then suddenly the letters stopped and soon her husband was gone too. Now a year later Marcie still can’t seem to move on with her life, she’s decided she has to find Ian. To talk to him about what happened over there and make sure he‘s okay. 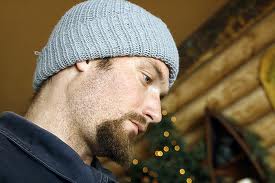 But locating Ian hasn’t been easy, nobody’s seen him for years and his family has all but written him off. After following several leads Marcie at last finds her hero but he doesn’t want to be found and definitely doesn’t want to be reminded of Iraq. Ian’s living far off the grid of society, a recluse in a rundown cabin in the woods with no amenities. Yes that’s right an…outhouse (dun dun dah) Ian Growls at Marcie to leave him alone, sounding much like the bear he now resembles what with all that hair but Marcie refuses to go until she completes her mission. Of course this leads to her almost freezing to death, catching hypothermia and Ian having to save and care for her until she’s better (It is a romance after all)

Marcie’s character is a bit of a goof and I really liked her and her adventures with living in a rustic cabin. I found it odd though that suffering a burn from not knowing how to light propane stove was hilarious while a flu/cold was a matter of life and death? I also didn’t find this quite as romantic as I’m sure others will as I have lived in the bush without power and it loses its appeal mighty fast especially in the winter. So while some might think it quaint that they cook on a woodstove, and read by candlelight, I cringed.

Anyways you don’t need to know much else, all the townsfolk turn up in one way or another and Marcie and Ian forge into a new type of friendship, one with benefits. Oh and it all happens right around Christmas. Sigh. 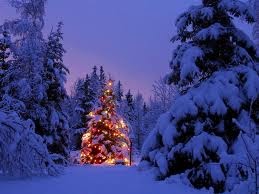