Log in with Facebook
or
Wrong email address or username
Sign up
Already on BookLikes? Log in!
Incorrect verification code
Please, check your email, the code to access your BookLikes blog was sent to you already.
Enter code:
« Back Send
back to top
Search tags: palm-springs-diaries 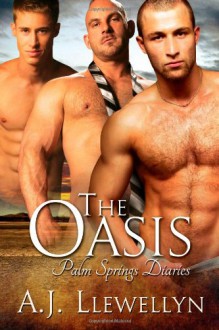 Elias and his best friend/roommate Josh take the plunge and head to Palm Springs for one of the notorious gay circuit parties that take place in the lavish desert resort called The Oasis on holiday weekends. After a disastrous start, they find all the sex with all the hot bodies they could want. However, they find to their surprise that the real oasis... was right under their noses all along. Elias and Josh realize there is something else between them. Could their real oasis be... each other?

So what did I think? This is one of those books where I've had a hard time actually deciding how much I really liked it. Yes I did enjoy it, yes I would recommend it as a quick enjoyable read, but I don't think I'd rave about it.

There were some elements that were great - some humour and a light-hearted touch plus the inclusion of Elias' son Julio (I love stories of men who love their children and place their happiness above all else).

But the story felt a bit disjointed. Elias and Josh are best friends and roommates and this is a friends-to-lovers story with a lot of other stuff happening. The story jumps from the men planning a weekend away, discussion about Elias' struggles with work and pleasing his father, long scenes at Josh's work where he films gay porn, a trip to a resort for basically a huge sex party, worry about Elias' weight and his obsession with pie, bumping into Elias' ex, the leather scene, custody issues regarding Elias' son, Josh and Elias falling in love, work troubles and run ins with the police for Josh......it's almost too much to cram in to a book of this length!

However, overall I did enjoy the story and read it in one sitting and will read the sequel, The Haven.

On a final note, I did find the cover slightly misleading. It shows three gorgeous men and I fully expected a story between the lead characters and a significant third. This was more like sex with a lot of other men although I believe that one of these will make an appearance in the next book. I should have paid more attention to the blurb so as to not have been influenced by the cover!

To find about more about A.J. Llewellyn and his books visit his website.

Buy The Oasis from Amazon.