Log in with Facebook
or
Wrong email address or username
Sign up
Already on BookLikes? Log in!
Incorrect verification code
Please, check your email, the code to access your BookLikes blog was sent to you already.
Enter code:
« Back Send
back to top
Search tags: paranormal-events Staring unflinchingly into the abyss of slavery, this spellbinding novel transforms history into a story as powerful as Exodus and as intimate as a lullaby.

Sethe was born a slave and escaped to Ohio, but eighteen years later she is still not free. She has too many memories of Sweet Home, the beautiful farm where so many hideous things happened. Her new home is haunted by the ghost of her baby, who died nameless and whose tombstone is engraved with a single word: Beloved.

I read this book to fill the Magical Realism square of my 2019 Halloween Bingo Card.

Wow.  Toni Morrison writes gorgeously about an ugly reality.  If her writing was any less majestic, it would be difficult to make it to the end of the book.  The situations she describes are searing in their intensity. As it was, I found I had to take my time.  Read a chapter, then rest and reflect. Read another chapter. Repeat. This wasn’t a book that I could hurry through.

It is an unflinching look at slavery and freedom.  An examination of what exactly freedom means and doesn’t mean.  It is horrifying and despairing and hopeful. Beloved haunts this family as slavery haunts our society.

I recommend it to everyone.  It is a powerful book and well worth your time.  Take your time and really feel it. Another good book on the same subject is Kindred by Octavia Butler.  Very different but also worthwhile. 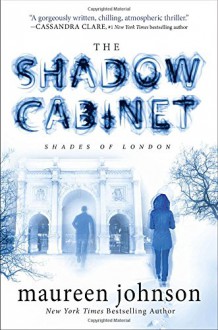 Rory and her friends are reeling from a series of sudden and tragic events. While racked with grief, Rory tries to determine if she acted in time to save a member of the squad. If she did, how do you find a ghost? Also, Rory’s classmate Charlotte has been kidnapped by Jane and her nefarious organization. Evidence is uncovered of a forty-year-old cult, ten missing teenagers, and a likely mass murder. Everything indicates that Charlotte’s in danger, and it seems that something much bigger and much more terrible is coming.

Time is running out as Rory fights to find her friends and the ghost squad struggles to stop Jane from unleashing her spectral nightmare on the entire city. In the process, they'll discover the existence of an organization that underpins London itself - and Rory will learn that someone she trusts has been keeping a tremendous secret.

I read this book to fill the Darkest London square of my 2019 Halloween Bingo Card.

I have rated all three books in this series so far at 4 stars, because I really enjoyed them. However, the first book still reigns supreme for me. This one, book 3, is better than the second one, but still not as much fun as book one. I miss the boarding school surroundings and Rory’s dread of field hockey. And Claudia. I miss Claudia.

Still, it’s a very good story, with suitably spooky Sid & Sadie waiting in the wings to use Rory’s talents. Plus the rather unappealing Thorpe, who now heads the team while Stephen is out of commission. I was happy to have Jerome reappear and he still has Rory’s back. Stephen is an unknown quantity at this point--after all that he has been through, will he be able to relate to Rory at all? I’m unapologetically on Team Jerome, but I’m probably in the minority on that one.

I’ll definitely read book four when/if it becomes available. I keep being surprised at how much I enjoy Young Adult literature, but I keep finding series like this one, which are well written, suspenseful, and deal with subjects and situations that interest me. Nina and her twin sister, Artemis, are far from normal. It’s hard to be when you grow up at the Watcher’s Academy, which is a bit different from your average boarding school. Here teens are trained as guides for Slayers—girls gifted with supernatural strength to fight the forces of darkness. But while Nina’s mother is a prominent member of the Watcher’s Council, Nina has never embraced the violent Watcher lifestyle. Instead she follows her instincts to heal, carving out a place for herself as the school medic.

Thanks to Buffy, the famous (and infamous) Slayer that Nina’s father died protecting, Nina is not only the newest Chosen One—she’s the last Slayer, ever. Period.

I read this book to fill the New Release square of my 2019 Halloween Bingo Card.

If you were ever a fan of Buffy the Vampire Slayer, this is the book for you. And just like the Buffy television series, this book is about so much more than young women slaying vampires. This is a book about grief, about the misunderstandings that happen between parent and child as well as between siblings, about the agony of being adolescent and not feeling like you fit in.

But, once again just like the TV series, there is plenty of action complete with plot twists and turns to keep you reading along happily. I’m maybe not quite as enamoured of this series as I was of White’s The Conqueror’s Saga, but I certainly wouldn’t be opposed to reading the next book, Chosen, when it comes out next year. I’ll be interested to see how Nina chooses to make her status as Chosen work into a life that she has actually chosen for herself. Psychic Nan Killian and Medium Sarah Lyon-White—along with their clever birds, the raven Neville and the parrot Grey—have been agents of Lord Alderscroft, the Elemental Fire Master known as the Wizard of London, since leaving school. Now, Lord Alderscroft assigns them another commission: to work with the famous man living at 221 Baker Street—but not the one in flat B. They are to assist the man living in flat C. Dr. John Watson and his wife Mary, themselves Elemental Masters of Water and Air, take the occult cases John’s more famous friend disdains, and they will need every skill the girls and their birds can muster!

Nan and Sarah’s first task: to confront and eliminate the mysterious and deadly entity that nearly killed them as children: the infamous Haunt of Number 10 Berkeley Square. But the next task divides the girls for the first time since they were children. A German opera star begs Sarah for help, seeking a Medium’s aid against not just a single spirit, but a multitude. As Sarah becomes more deeply entwined with the Prima Donna, Nan continues to assist John and Mary Watson alone, only to discover that Sarah’s case is far more sinister than it seems. It threatens to destroy not only a lifelong friendship, but much, much more.

This is one of the weirder tributes to Sherlock Holmes that I have read. I really enjoyed Lackey’s The Last Herald Mage series and was hoping that I could jump into this Elemental Masters series at book number 11 without any problems. It is easy enough to get the hang of this world, but I couldn’t help but think that Mr. Holmes and John & Mary Watson could have been swapped out for other characters without hurting the narrative one bit. I am not sure why the author used them, but she must be a fan.

This is mostly a paranormal adventure story, not something that one would expect to find Sherlock Holmes at all interested in. (In fairness, he isn’t interested at first and only gets drawn in close to the end). It’s not a particularly complex story and is mostly about the ghost-contacting and psychical skills of the two main characters, Sarah and Nan. They each have what I would call a familiar, an African Grey Parrot and a Raven. The birds were an interesting touch, and made more sense than the horse-shaped Companions of The Last Herald Mage series.

I already have the next book, A Scandal in Battersea, signed out of the library, so I will probably read it, but I wouldn’t have been ready to search for it if it wasn’t readily available. Not the greatest Holmes pastiche, but unlikely to the worst either. Sherlock Holmes aficionados should stay well away, this is for paranormal fantasy readers! This supernatural mystery set in the world of Sherlock Holmes and Lovecraft's Cthulhu Mythos features a brilliant detective and his partner as they try to solve a horrific murder.

The complex investigation takes the Baker Street investigators from the slums of Whitechapel all the way to the Queen's Palace as they attempt to find the answers to this bizarre murder of cosmic horror!

I didn’t read any of the available information on this graphic novel, choosing instead to go in relatively blind and see where it took me. I was entertained. A fun mash-up of the Sherlock Holmes and Cthulhu stories of Conan Doyle and Lovecraft respectively.

This is an interesting alternate historical timeline and I’m hoping maybe that Mr. Gaiman may be convinced to produce another volume and move the story along?

I note that neither the Holmes-like character nor the Watson-like one are actually named in this version. In fact, there is a reference to a limping Doctor named Watson at some point, leading me to believe that Holmes & Watson are out there somewhere, waiting to be discovered.

I love the artwork in this one, especially the depictions of the two main characters. I will look for more work produced by these artists.