Log in with Facebook
or
Wrong email address or username
Sign up
Already on BookLikes? Log in!
Incorrect verification code
Please, check your email, the code to access your BookLikes blog was sent to you already.
Enter code:
« Back Send
back to top
Search tags: porn-star 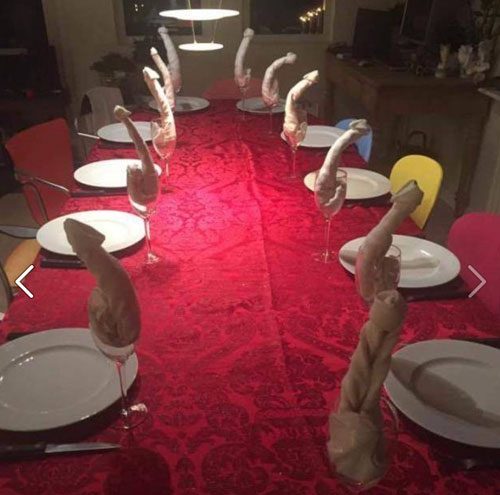 Look at the table setting at the Blue Boy party!

I think I might one of the few stragglers who hasn't read Bullet. This is also my second Garrett Leigh. Can I still visit the party with my low Leigh credentials? I promise after reading the re-release version of Bullet...I'll make more an effort to read her work.

The novella stars seasoned porn actor Levi Ramone is a well known top in the industry. Ripped, bearded and rough, Levi is a lumbersexual wet dream. (Oh the new cover fits him, does it not?)Does he enjoy his job? In a way, yes. He gets all the ass he wants and doesn't have to worry about commitments. But...he's virtually alone. His father committed suicide and his mother is an alcoholic with a grudge against her son, Levi doesn't have really close connections. The majority of his money is pay for his mother's bills despite her animosity towards him. He's desperate for cash to help.

It's a sad existence.

Sonny picks through the wall Levi builds around himself. He also helps Levi discover the untapped pleasures...below. As the upcoming bottoming scene looms as the novella progresses, there is also Levi's broken home/ dealing with a harridan of an alcoholic mother.

Now I thought it might've went one way with the mother, I was not expecting some of the resulting blows from that front. Or bottom assistance/prep/seduction

Where is the rest of the story? I had to stop myself from shaking my Kindle upside down. There is no way Levi and Sonny just ends the relationship like that.

*listens to the squawking from the party*

There's follow up in the rest of the series? Is that so?

Well, hell looks like I need to rest of this series! I'm so curious to see what happens with the other characters. And Sonny and Levi of course...there's a hint of unresolved drug abuse somewhere along the line.

Gonna see if I can get my Garrett Leigh dance card filled out now that I've joined the party:

I enjoy what I've read so far.

Recommended for readers who like some angst, some sexy and characters that have some baggage too. Robin, a fire knife dancer, gets burned when his act is disrupted by a drunken heckler. The drunken heckler's ex-boyfriend, Kelly, makes sure Robin gets home okay and then helps him treat his burns.

This story would have been a heck of a lot sweeter if 1) Robin hadn't been burned and 2) if Robin and Kelly had actually known each other for more than a few hours. It wasn't so much that Maxfield forgot Robin's burn as it was that it seemed like his burn should have interfered with the sexytimes portion of the story more. As for the “they only just met” aspect...

Kelly confessed that he used to be a porn star, one half of a supposedly committed couple (the drunken heckler was the other half), except his boyfriend turned out not to be nearly as committed as he was. Robin is gay but previously lived somewhere where, as far as he knew, he was the only gay guy around. He'd never been with another man before, and he was nervous about how he'd measure up, considering that Kelly had more experience. There were some awkward moments as Kelly got upset and hurt because it seemed like Robin was looking at him more as an ex-porn star than as a guy he was attracted to and who was attracted to him in turn.

I wasn't really comfortable with the two of them having sex and acting like it was the first step to them being a more committed couple than Kelly and his ex. Again, they just met.

I'll wrap this up by talking about the confusing bits. First, there was this part, just before the start of the story:

WTF? When I first read this, I thought it might be a badly-formatted publisher's description. Which I thought was weird, since I had been pretty sure this was a m/m story. Then I read the story and realized it was a m/m story, and that that chunk of text had absolutely nothing to do with anything that happened in it. So what was that chunk of text? Some filler text that someone put in and forgot to take out? I googled it and found out that it came from something called "Deep Cover" by Fancyfigures, which, um, seems like a pretty shady thing for Torquere Press to do. I wonder if that has anything to do with why I can no longer seem to find this story available for sale anywhere.

Second, there was the bizarre dialogue at the end of the story. There were a couple bits I had to read several times, because it seemed like either something had been left out or had been shuffled around. I'm still not sure what was going on there. I wouldn't be surprised if it was some kind of editing error, since that would fit with the weird bit of text at the beginning of the story and the occasionally missing question marks.