Log in with Facebook
or
Wrong email address or username
Sign up
Already on BookLikes? Log in!
Incorrect verification code
Please, check your email, the code to access your BookLikes blog was sent to you already.
Enter code:
« Back Send
back to top
Search tags: rakes-and-scoundrels This offering in the Dreamspun Desires series was deliciously tropey and thus a perfect addition.

Jericho Knox is a Hollywood bad boy/actor, known for his wild ways and public escapades. His publicist team is tasked with keeping him in the news which seems fairly simple, until Jericho is outed in a grainy image taken in a bar's restroom while getting a BJ - from a guy.

Of course in Spin-Everything-Hollywood, the publicist team does what it does best - put a positive spin on a this potential disaster, and, wouldn't you know, Jericho has been in a long-term relationship with Kerry Pickering, of said publicist team.

I understood Kerry's motives for going along with the ruse, and I actually quite liked his character. He did what had to be done, no matter how reluctant he was about the whole thing, and even if it was detrimental to his own reputation, considering the seediness of the, uhm, situation he pretended to have been a part of.

I didn't like Jericho for a long time in this book, especially not when he presumed that Kerry was doing it for the money, or the fame. I don't think he understood Kerry at all for the longest time, and he didn't seem to want to even make an effort to get to know the real Kerry, instead making assumptions that aren't based on any kind of reality.

Of course, this being a romance, the two fall in love over the course of the book, there's some more drama, but the happy ending left nothing to be desired.

The plot flowed well, without any major lulls, the writing was perfect for this tropey romance, and I was highly entertained throughout.

** I received a free copy of this book from its publisher. A positive review was not promised in return. ** 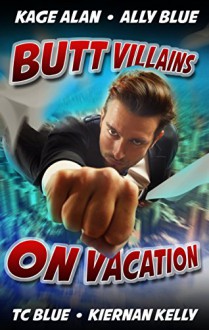 What do you get if you mix a proven team of 4 authors, snark, sarcasm, and a good dose of humorous antics? Why, you get another butt-thology, of course.

In this latest anthology from Kage Alan, TC Blue, Kiernan Kelly, and Ally Blue, we get Butt Villains On Vacation!

First up, Master Malevolence in The Tail Of The Fluffy Monkey, by Kage Alan:

This story could only have been written by Kage. I mean, seriously, it has what we shall call Kageisms all over the whole thing. I was howling with laughter only a few pages in, because the clever snark just does it for me. I have a weird sense of humor sometimes, and that's what Mr. Alan usually delivers. Snark. Sarcasm. Witty one-liners. Acronyms that make me giggle, such as Plot Outline Of Peonage, aka POOP. I'm also secretly a 12 year old boy... sometimes.

We enter this story at an awards ceremony for villains....

"In the category of Villainous Acts Green, or VAG, our first nominee is [] for her victory in unknowingly getting the members of a certain church in Harlem hooked on the taste of semen in their coffee."

"Mr. Malevolence [the guy from the title] piped an invisible [] gas into Congress that had every male politician believing they'd grown female genitalia just prior to a vote on limiting healthcare..."

Another nominee perpetuated a hoax that all gay people were going to relocate to Texas which had Texas secede from the Union in protest, and.... well, you read this for yourself.

I was laughing so hard, I cried. I couldn't breathe, gasping for air. The way all these current affairs are woven into the speech just left me in stitches.

And on it goes, with snark, and more snark, a wee bit of possibly romantic feelings between two villains, one of them The Fluffy Monkey, lots of references to Gweilos, surely a nod to Mr. Alan's HH and Little Brother, and a conspiracy plot, plus sexing up villain-style - it's a fast ride, it's hilarious, and it earned itself five shiny stars for being so fabulous.

Bonus points for honoring the memory of someone from our FB community who is no longer with us.

What do you get when you mix an on-the-run alien villain running a B&B with an Earthling bartender? Why, you get this funny and quite sweet story, of course.

Kynn-ang-Peen, the aforementioned alien, is supposed to be a villain, but only wants to make people happy. Not exactly in the villain job description, amirite, so he's been running off his home planet and landing on Earth, where he now runs a very unsuccessful B&B. This might possibly be because Kynn-ang-Peen has no "earthly" idea what earthlings look for in a nice, quiet B&B, and his idea of one doesn't mesh with his customers. Or non-customers, because nobody is staying.

His vassal, aptly named Thfft, is mostly interested in hunting and eating crabs, so when the latest potential customer leaves (and then goes up in a heap of smoke, because angry and disappointed villain right there), our lovable alien hies himself to the local bar, Cajun Alley. Where he meets Riley Jackson, bartender, and this is where the plot takes off and goes from villainous and fun to mostly sweet and fun.

It's really rather cute, with misunderstandings between alien notions and Earth reality, and while Riley may be just a little too perfect in his actions and understanding and reaction to coming face to face with an alien, I did like this quite a lot, and thought the ending was just perfect.


Attack Of The Undead Enema, by T.C. Blue:

This was more on the sweet side as well, telling the story of Jake Green, villain-in-hiding, and Griffin, waiter at the resort where Jake is staying/hiding. It has a real villain (The Undead Enema), a bit of angst, and a great romance between the two main characters. I really liked how Griffin stood up for Jake, and basically showing him that their love was worth fighting for, and that the Undead Enema mustn't be allowed to win. I really liked Jake, who was supposed to be a villain, but not, and who loved strongly, and just wanted to do the right thing. He carries a lot of guilt from something that he thought he caused a couple of years back, and I felt sorry for him. I rooted for him and Griffin throughout.

Sadly my least favorite of the four stories in this anthology, mostly because I felt that it wasn't long enough to do itself justice.

The Assassin Bandit (or Ass Bandit, as his travel agent Loki calls him) has been booked for a holiday in Hero Land instead of the Rogue Empire Resort where he expected to stay. Whoopsie. Loki done messed up, but Loki ain't sorry. Faced with impertinence from his not-sorry travel agent, this Super Villain decides to wreak chaos and mayhem in Hero Land instead, because, you know, one's got a reputation to keep.

Except he's foiled in his plans by the Golden Adonis, a hero from Hero Land, whose primarily claim to fame are his adonis-like looks and physique. Shocked that his usually overwhelming smile does not work its magic on Mr. Ass Bandit, our hero feels spurred into action.

It's a Code 69. All of Hero Land must be warned that a villain is in their midst, OMG. Except Adonis, The Golden, feels a stirring in his loins, one that may possibly be reciprocated by our Ass(assin) Bandit, and off they go to possibly fornicate.

I liked the writing in this story for its witty and clever references. Unfortunately, I didn't quite buy the romance and the changes in attitude on the Adonis' part in the timeframe we're given here. It was just too short.


** I received a free copy of this book from one of its authors, because he knew I was salivating for more butt-thology. Thank you, Kage! A positive review was not promised in return. **