Log in with Facebook
or
Wrong email address or username
Sign up
Already on BookLikes? Log in!
Incorrect verification code
Please, check your email, the code to access your BookLikes blog was sent to you already.
Enter code:
« Back Send
back to top
Search tags: ruben 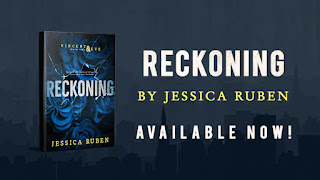 We're celebrating the release of  RECKONING (Vincent & Eve #2) by Jessica Ruben! One-Click your copy and if you haven't purchased RISING, do it now while it's only $.99! 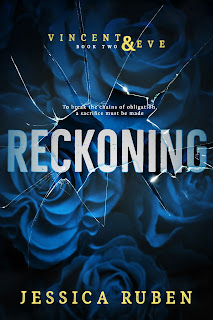 
Blurb:
Vincent:
Forgetting about Eve was the plan. Finding her at a party on my college campus was the last thing I expected.

But letting her go again isn’t an option—not this time. Juggling the life I want with the one I was born into may be near impossible, but for her, it's a risk I'm willing to take.

My world has turned into a house of cards, where one wrong move can send it all crashing down…and us with it.

Eve:
Finally at a prestigious university—and on the path to living my dreams—I’ve left the darkness of the Blue Houses behind. Still, a whole new host of problems await me.

He's king of the school, complete with a society princess by his side. I thought I wanted to know what he was hiding, but unlocking his biggest secret leads me into entirely new territory laced with danger
and lust...one I’m not sure I’ll survive.

*RISING must be read before reading RECKONING. 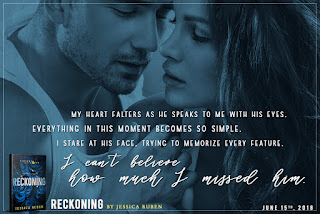 Reckoning by Jessica Ruben
My rating: 4 of 5 stars

Eve was enjoying her time as a Freshman at Columbia University. She earned her scholarship here. The future as a lawyer is her dream, and she is almost there.

Vincent has no idea that Eve is going to turn up where he is finishing school. He is wrapped up in several things at the moment. All things he does not want to taint Eve with. How to have her and not mix those worlds?

Their love is very sexy and highly emotional. This story is high with the heat and very heartfelt. As the sparks fly in many directions, Vincent stresses out trying to keep his worlds apart so they do not collide. I am so excited for the conclusion and hope the author hurries! 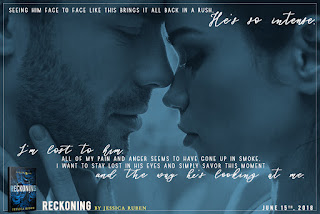 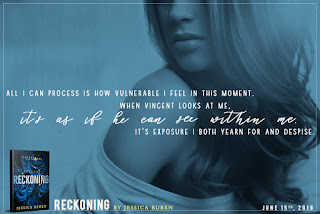 ON SALE FOR A LIMITED TIME! 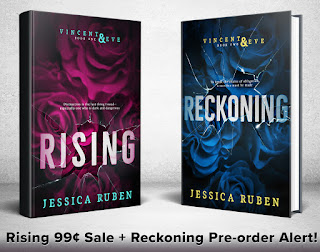 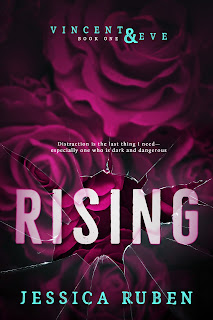 About the Author:
Jessica Ruben lives and works in New York City, where she spends her days dominating in the court room as an attorney. Come nightfall, she writes romances centering on gorgeous alpha males and the intelligent women who love them.

Jessica is an insatiable reader, and will devour a few books a week without batting an eyelash. Books have always been her drug of choice, and she has no plans on detox anytime soon. She has three wildly delicious children and a husband who, for reasons unimaginable to her, loves her brand of crazy. Eve was enjoying her time as a Freshman at Columbia University.  She earned her scholarship here.  The future as a lawyer is her dream, and she is almost there.

Vincent has no idea that Eve is going to turn up where he is finishing school.  He is wrapped up in several things at the moment.  All things he does not want to taint Eve with.  How to have her and not mix those worlds?

Their love is very sexy and highly emotional.  This story is high with the heat and very heartfelt.  As the sparks fly in many directions, Vincent stresses out trying to keep his worlds apart so they do not collide.  I am so excited for the conclusion and hope the author hurries!  I give this ARC copy a 4/5 Kitty's Paws UP! This is getting unbelievable.

Trish comes home, finds her family dead, and doesn't call the police.  Instead she runs to her boyfriend, to find her cheating, and other big stuff happens.  (I'm glossing over to get to the important, unrealistic to me part.)

She's talking to her friend who finds her, and asking what she'll do.   She just blurts out that she goes home to find her parents dead, and that she thinks they killed themselves.   Neither of this sixteen or so year old girls thinks to call the police about, say, where Trish will stay?   What the what?

Neither of them are concerned that this could be something the police need to investigate, and that the longer they don't call the police, the more chance that shit could get fucked up real bad? I am absolutely not amongst the audience for this book. I knew that from the title alone, much less the description. Still, I'd read Ruben's first book and enjoyed it and was curious about her take on this idea.

This is basically a take on the dying teen romance, with a splash of the Rob Reiner movie. I'm tempted to go on a rant about the whole dying teen romance idea -- <b>The Space Between Us</b>, <b>The Fault in our Stars</b>, and the like -- but I just don't have the energy. I don't get it, it seems like a highly artificial way to inflate drama. But whatever -- just because it's an overplayed idea, that doesn't mean the book can't be good.

Besides, the central characters in this book are 20 and 21, so by definition this is different.

Leah is surprised one day to find the new guy moving in next door is her old best friend that she hasn't seen for 5 years. Damon (think Ian Somerhalder) is glad to see her, but before they renew their friendship, has to warn her that he'll be dead within a year and a half. He has some sort of brain tumor (Ruben intentionally gives few details about this) that cannot be treated. Leah decides that she'll do what she can to renew their friendship in the time remaining.

Soon after this, the two decide that he'll write up a Bucket List and that each day, they'll cross an item off of it until it's too late. This will lead to all sorts of travel, adventure, changing of existing and/or new romantic relationships and (this isn't much of a spoiler, you can tell it'll happen from the get-go) their eventually falling in love.

The worst part about this book is how everything that happens to them is the best, the greatest, the ____est (or the worst). Leah and Damon live in the extremes -- they never have a normal day, a blah experience. It's just too much to handle -- a few things that are okay, a few things that aren't bad mixed in with all this would make this easier to read. Yes, you could say that given the heightened situation, everything they do is given a hint of the extreme, but still . . .

The tricky thing with Damon having an unnamed disease -- it's hard to have any idea how realistic this is. But a brain tumor that causes organs to decay before death, necessitating an ethically/legally-questionable euthanasia method is stretching things beyond the breaking point. Beyond that, the amount of money that these people spend is utterly unbelievable -- talk all you want about plundering no-longer-necessary college savings, it's just not something I could buy.

There's an element of charm to the writing -- but I don't think that this is as charming as Ruben's first book -- there's something appealing about the earnestness of her writing. But this just wasn't for me. Although he probably didn't say it, Abraham Lincoln is often quoted as reviewing a lecture by saying something like, " People who like this sort of thing will find this the sort of thing they like." I feel like that about this book -- if you can find a grain of salt big enough to help you swallow the unbelievable, if you can tolerate the excess of superlatives, and like a love story in the face of certain doom, this is probably a pretty entertaining book. Was it for me? Nope. But I didn't hate it and can understand why many would.

<i><b>Disclaimer:</b> I received this eARC from the publisher in exchange for this post -- I do appreciate the opportunity, even if it doesn't come across that way.</i>