Log in with Facebook
or
Wrong email address or username
Sign up
Already on BookLikes? Log in!
Incorrect verification code
Please, check your email, the code to access your BookLikes blog was sent to you already.
Enter code:
« Back Send
back to top
Search tags: scifi-lgbt 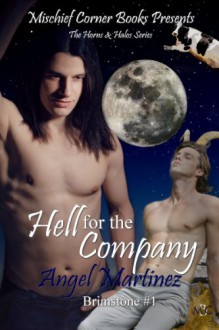 Antigravity cows. That's three stars in the bag right there.

TL;DR: funny Space-Western with Angels and Demons. Read it on a day you're feeling grumpy, it'll perk you up.

And...for the rest of this review, please keep in mind that I am a Science Fiction reader first and foremost. And as a reader, I'm extremely critical of the majority of books in the romance genre - notwithstanding the hypocrisy of having written books that could purportedly belong to that sub-genre myself.

Angel doesn't suffer from the shortcomings of many of the other authors I've read in the genre - she writes very well, with strong emphasis on craft and a lilting "aww shucks" voice that goes down very nicely. Like Czech beer - refinement, without having to work for it. But on that note...

Her MCs do interact sweetly enough that I'm entertained. But the story falls into the same tropes that *all* romance falls into - boy meets boy, boy likes boy, obstacles, tears, passionate declamations, happily-ever-after (at least for now) etc. etc. So: Readers who enjoy light M/M will get exactly what they expect, and all is well. But it's not precisely up my alley.

Firefly. The Ship Who Sang. Douglas Adams. This book swoops into all these territories, lands with a light touch, then takes off again to the roar of the Brimstone's engines. Too soon, like the actual Brimstone (though in the book they're usually in mortal peril, so that's probably wise).

The MC, Shax, and his pilot Verin (too much Robert Jordan for me, I had to work to *not* picture Verin as a short, dumpy, Brown Ajah Aes'Sedai, but that's my own reader's baggage and no fault of Angel's descriptive talent) and their ship, the Brimstone, has a very Malcom Reynolds/Zoe/Serenity feel, except that Shax is far more vulnerable than Captain Mal, and Verin is grouchier than Zoe...Their ship's computer, the always-entertaining AI-in-drag feels like some of Helva's colleague-ships.

And then there's the angel-demon angle. It tastes like Good Omens - Shax, in moments, vibrates with Crowley-like glee, and Ness's apologies take on Aziraphale's cadences.

Space-western with demons and angels that doesn't take itself seriously? Hell yes. Pun not totally intended.

Which brings me to that last, fifth star that I couldn't give. Perhaps I'm throwing a tantrum because of what I *didn't* get, and really wanted: more of the good stuff.

More of the things I got a tantalizing glimpse of - the wistful and mischievous reminiscences of thievery Shax alludes to when he sorts through his box of pretties. The fascinating and strange history of Demons in Space. The planets, the world-building, the ships, the AI, the war. The smell of Amnesia, the corridors of the Brimstone, the vegetation-with-teeth on the cow-resupply planet. These very Sci-Fi touches were created, vividly, in a few sentences. *This* is where this book should have lived.

But then BOOM! we were back to sappy romance stuff. Gah! Even the Big-Baddies were un-baddified to serve the romantic outcome. I'd have preferred personality conflicts, character-assassinations, ship-board politics that *don't* serve the romantic plot, instead serving the true strengths of Angel's story. Example: Shax pisses off Ness and Verin simultaneously somehow, and they become allies in thwarting Shax's mania for risky deals.

I get the strange feelings I'm going to annoy a number of romance fans, and some friends, with this review. But all I can do is speak my version of the truth. It's a genre-preference thing, and the fact that I really want to get my teeth into more of Angel's writing.

To that purpose: I'm going to buy every one of the books in this series as they come out. I won't skip the mushy stuff, because the story demands that I don't, but I will make cow-like noises from time to time. 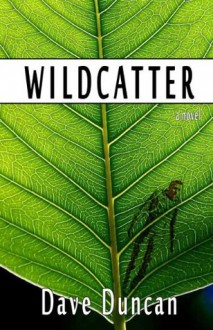 Dave Duncan has a gift for creating planets. He starts with the orbital parameters, and ends with the smell of the place: correct, plausible, yet creative.

The problem with this book, in my opinion, lies in its handling of social commentary. Oh, the characters are well-done, even if a couple of them are a bit 2-dimensional, but that is *not* a writing problem - we're in Seth's head, and we see the world filtered through his eyes, and he can see the world as 2D from time to time.

So, the social commentary:

Firstly, I have to give Duncan props for his courage and his internal ethics-compass. I was not expecting this, and when I found it, it was a surprise, and a good one.

Most mainstream SciFi writers, especially straight men, will not handle some of the social issues brought up here - gender politics, fluid sexuality, cis and trans identities. It's done with some mild amounts of clumsiness, but the *message* is strong and clear. Heart's in the right place, at least.

I've seen it done better - by Bujold, McCaffrey. Mostly women writers. Because to write about it, you must sympathize, if not empathize. And sympathizing means truly *seeing* it. Many men don't, you know, especially in the Aerospace industry, STEM fields - the sexism, the requirements for conformity. I've seen colleagues sit down at lunch and just *watch* the subtle harassment of one of our own, and when confronted, the response is often "well *I* didn't see it as harassment", with the unspoken addendum of "Man up, Aldous, it wasn't a big deal, *she's* not making a fuss, why should you?"

So kudos, Mr. Duncan, for seeing it.

The problem in this case is that the sensitivity and intelligence of our MC, Seth, is at war with his testosterone-driven fight-or-fuck Wildcatter nature. Throw in a few dashes of post-adolescent young-man-fantasy-fulfillment, and you get a book with rampant contractions. Seth sympathizes, but doesn't empathize. He's fearless, but prone to falling into the same cultural tropes as any other action hero.

Then he marries a Herm, with a full-femme thrown in there to keep the balance, because Duncan sympathizes, and is creative, both socially and scientifically, but he still cannot internalize the world he writes about.

And that's quite OK, because it is leagues and leagues better than his competitors. 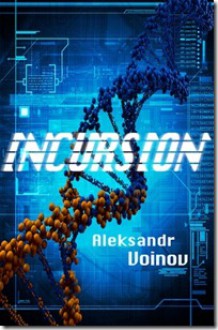 Thank you, Lena, for suggesting this, because it's exactly what I was looking for. A good Gay SciFi Military/Adventure.

Many people have said this, and I will reiterate: a book is made on the strength of its characters. And Kyle Juenger is a strong, strong character. Suffering builds depth, and more than that, transcendence of suffering builds a hero. Voinov does both beautifully.

And the sex. This, dear readers, is how sex should be done - as part of the novel's plot, as part of the deepest truth that characters hold in them. Vindication, and release, and reluctance and helplessness and strength and an echo of the theme and motif.

Needless to say, this is one of the few - very few! - sex scenes I've ever read that I didn't skip.

Everything in the first 4/5ths of Incursion is pitch perfect. My problem, at the last star that I can't give, revolves around the end.

The resolution comes too close to the most tense, fraught and plot-edifying scene in the book. Kyle Juenger-the character we've followed with bated breath and respect from page 1-deserves better. The end, pacing/plot-wise, feels like the "calm before a storm", when the hero regroups and finds his balance with the new truths of his world, and then...the end.

If this was a series (or, more appropriately, a serial), it would get 5 stars, and I'd buy the next one. As it is, I'm missing a true denouement...

That said, as I and other readers sift through bullshit-writing and cliche plots and Ukes and Semes without any sense of their own identities, on Amazon and Smashwords and wattpad, reading Incursion feels like finding that Renoir in a rummage-sale. A little faded, and nobody's going to give you more than a 100k for it at Christie's, but damn if it isn't awesome.