Log in with Facebook
or
Wrong email address or username
Sign up
Already on BookLikes? Log in!
Incorrect verification code
Please, check your email, the code to access your BookLikes blog was sent to you already.
Enter code:
« Back Send
back to top
Search tags: shattered-blue 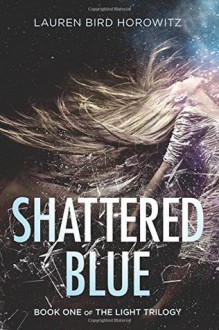 In all honesty, I'm not up for reviewing because I feel the need to read as much as humanly possible between now and Wednesday before I have to drag myself back into textbook world.  This semester is kicking my butt.

So, to keep this short and sweet.

I loved the world building that happened toward the end.  I loved the relationship development between Noa, Callum and Judah, toward the end.  I loved the twist and turns that happened, again toward the end.  Seeing a pattern develop here?  Shattered Blue started off incredibly slow, even for someone who doesn't really mind the slow burners.  There was just enough to keep me going, but nothing that really made me fully commit. Until it did.  Judah entering the scene turned the corner of the story for me, and not because of the whole love triangle thing that I'm sure he was meant to be.  It was more that the characters seemed to be a little superficial until he popped up; adding his story line allowed the other characters to fully break the surface that they were originally lingering just below.  But given the character and storyline development in the last quarter of the book, I'm expecting good things from the last two books of the series. Really good things.

I received a free copy of this book from the publishers via NetGalley in exchange for an honest review.

I really enjoyed this book! I'm sad that I have to wait to read the next installment, though!

The story was creative and well-written. The ending was a total surprise! Often, I am able to guess at least somewhat how the book will end. However, this one totally got me!

I can't wait to read the next book in this series! I hope it is as good as this one!
Like Reblog Comment

I'm not going to lie... half the reason I requested this galley from NetGalley was because of the location of the story. It takes place in the Monterey Bay area, one of my former stomping ground in my former soldier life. I love the area and I was happy to read a book that took me back there, even just for a little while. And to make it even better, the story was engaging and I am ready for the next book in the series!

The Fae mythology in this book is of the darker variety, which I enjoy so much. The fae in this story are not Disneyfied, but live in their own world with their own strife and struggles. Humans are generally nothing more than an energy source, than cattle. In fact, the human reality is often used as almost a prison for wayward fae. Struggles in the fae world have come into the human world amd the story unfolds.

The story is told in three parts: Noa, Callum, and Jonah. What I found interesting was the way the POVs were written throughout the book. In the first part, the POV is strictly Noa's and we learn so much about who she is as a person through her own eyes. The second part, although Callum's part, is told through both Noa's and Callum's POVs. The final part was told, at different points, from all three POVs. Here and there, there was also a bit of narrative from some of the other characters adding their voices. It was a truly interesting way to present the story.

Noa is a fantastic female protagonist. Life for her has been hard. She has been through some terrible times and she is still struggling to find her way and her place in the aftermath. Sadly, her family has kind of checked out and it is her little sister that seems to be her lifeline. Callum is more than a little mysterious, blowing hot and cold for Noa for reasons that are just as mysterious. And then there is Jonah, cast as the bad boy... but is he really?

I loved the anticipation that never lagged throughout the book. There were so many twists and turns that kept me turning the pages. And some of the twists came out of nowhere and I love to be surprised!

This was truly an engaging story! I love fae stories and especially those that use a darker mythology, like this one. This is a book that I highly recommend!

Wow. Just wow. What can I say about this book?! It was fantastic, and bursting with surprises. It went in so many different directions that I never saw coming, and I truly loved every twist and turn. Shattered Blue really knocked my socks off! I love that feeling you get towards the end of a great book when you are up in the middle of the night, unable to rest until you've absorbed every last word, and even afterwards you lay there, a bundle of untamable energy just marveling at the sheer brilliance of what you just read.

I think the thing that really got me was I wasn't exactly prepared for how smart and intricate this plot ended up being. It was sneaky, like a ninja. I feel like Shattered Blue started out being something smaller, something simple but still good, I just wasn't expecting it to rock my world like it did. About halfway through little things started happening, adding an extra layer here and an extra layer there to the plot line, and by the end the only thing shattered was my mind! This ended up going in so many new exciting places and I seriously don't know how I am going to get through the agony of waiting for the second book when this one isn't even released yet!

I also have to add that I have read a decent amount of Fae books, and some of them are my favorite books of all time, so I have to give this book credit for coming into this scene, amongst some heavy contenders, swinging hard. I liked that there were some very unique elements to these Fae and their world. It was a fresh take on something that's been done many times before and I really appreciated the exceptional additions that made this story something different.

The romance was also something I can say took a turn in a direction that I was not anticipating, and the story was much better for it, in my opinion. This was yet another aspect that I thought I had a figured out and it ended up growing into something with a lot more depth than I was expecting, and quite a few shocking twists. I wasn't entirely impressed with the feel at the beginning where I thought that this was going to be an insta love type relationship. I really loved that as the story progressed and the characters matured, so did their relationships. I think there was a great play on the naivety of falling so hard so fast for someone that you really might not know as well as you thought you did, and the dangerous and damaging consequences of such. I thought it was a genius move and I really can't wait to see where the next book will take things!

I did enjoy the shifting points of views as well, my only real complaint about this book would be was I think that it would have been better, or would be better in the future books, to keep the POVs down to maybe the main 3 characters. I didn't think a few of them, Mile's voice for example, added much of anything to the story, and I felt it was kind of unnecessary. But who knows, maybe I am wrong and that's some sort of set up for him to bring something more in the future books. I was just a little confused by his narration in this one.

All in all this was an awesome read, I was super impressed and will definitely be on the lookout for the next book and more from this author!

Noa is 15. Her sister Isla is dead. Every morning she realizes it, even after 3 months. More and more Noa seemed to be seeing Isla's ghost. Callum is a new boy at school. He and Noa seem to be drawn to each other.

The plot and overall story were good as were the characters, especially considering I"m not too into books about the Fae, but this story captivated me to finish it. Each couple of pages typically spoke of something new. Noa, who had never especially been noticed by many. Callum wasn't human, but portrayed one. The characters really made the story. I recommend it to anyone who likes this genre.