Log in with Facebook
or
Wrong email address or username
Sign up
Already on BookLikes? Log in!
Incorrect verification code
Please, check your email, the code to access your BookLikes blog was sent to you already.
Enter code:
« Back Send
back to top
Search tags: sourdough 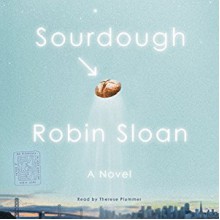 I read Robin Sloan's previous book, and I liked it a lot so naturally, I was looking forward to reading Sourdough. I didn't know a lot about Sourdough (compared to the books in the previous novel) but have googled a bit since then, but it sounded fascinating.

It was a really nice read. The author clearly has a love for San Fransisco, it was nice to see him so enthusiastic on the topic. I recently saw a documentary on sourdough and apparently San Fransisco is the place to be when it comes to it.

I find myself still thinking about this book from time to time. 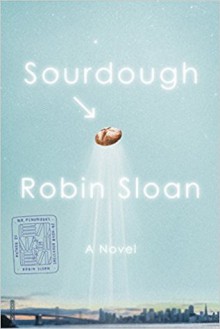 What an interesting read, as in, I’ve never read anything quite like that before, and I’ve never come away from a book that was NOT a cookbook, thinking about food like I have with this one. Bread, glorious bread! It’s the central subject, and I was actually warned before reading it about the ‘dangers’ of reading it on an empty stomach, and about how you end up craving your carbs afterwards. A young lady who discovers a love of baking bread and gives up her life in the tech world is the simplest way to put this book, but it’s SO much more.

What I didn’t expect was the underlying long-distance love story, which I enjoyed very much, and several other little quirks that author Robin Sloan brings to the (restaurant) table. He has a way with words that is so unusual and full of fabulous descriptions that your senses are filled up when you read this book. I hate to admit it, but there were times that I was so distracted by the descriptions of noises (these were surprisingly the most amazing to me), smells, tastes, that I lost track of the story at times. Sloan also comes up with the most glorious names for characters! And the contrast in the book between technology and the basic act of doing something simple like baking bread is such a fantastic thing to think about. What may turn off some readers is the constant dialog about bacteria and fungus (which of course is central to the basis for starting off bread, as well as cheese); I’m not squeamish but it distracted me sometimes! But there’s a lot of science in cooking, and that has to brought up if you’re talking about this topic in-depth.

I can absolutely see this novel being made into a TV show, and these characters and the concept being written about by the creators of maybe ‘The Good Place’ plus the writers of ‘The Office’. There’s a lot of ‘food for thought’ for a TV version for something even beyond the confines of this book.

I can see why this has become an unusual, and almost ‘cult’ hit of a book; just don’t read it  when you’re hungry. 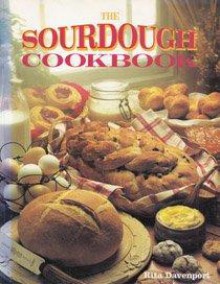 i'm a firm believer that recipe steps should not be written out as paragraphs.  very hard for me to actually parse the instructions.

This was a really good read. Yes, it was somewhat cheesy, but cheese goes good with bread. Ha!

A story of a woman, Lois, whose life makes a big change when she moves from Michigan to San Francisco to work at a tech company coding programs for robots. The new company sounds like a Google workplace with free food and beds which keep the employees there way after hours.

Lois has no friends other than those few at work and spends most of her time at the company. She finds a menu for a new restaurant, a whole in the wall, and starts ordering from them. It ends up that she orders from them so much that the brother who own it call her "Number one Eater".

Then the brothers Visa expires and they give Lois a going away present. Their starter for the Sourdough bread that they made.

This makes a big change in Lois' life and all for the better. A little sappy towards the end - yes, this is the cheesy part - but a very enjoyable read.

And yes, I looked it up, there is a "Lois Club". I didn't find any Debbie clubs, however. Ha!

Thanks to Farrar, Straus and Giroux and Net Galley for providing me with a free e-galley in exchange for an honest, unbiased review.

There's a version of this where all I do is talk about how this is similar to/different from Mr. Penumbra's 24-Hour Bookstore -- but I don't want to do that. Let me just say up front that if you liked Mr. Penumbra's, you'll dig this. If you didn't like it, you will dig this -- and you probably were having a bad day or weren't paying attention when you read Mr. Penumbra's (or you were created by the Tyrell Corporation). So let me sum up: you will dig this book.

This is the story of Lois Clary, a computer programmer working on ways to help robots redefine the concept of work for the future. It sounds like a dreadful place to work -- intellectually rewarding, maybe; challenging, yes; but between the hours, the pay and the culture? No thanks. The work is demanding enough that they don't have time to eat/prepare food, many using Slurry, "a liquid meal replacement," for several meals each week.

Slurry was a nutritive gel manufactured by an eponymous company even newer than [the company Lois works for]. Dispensed in waxy green Tetra Packs, it had the consistency of a thick milkshake. It was nutritionally complete and rich with probiotics. It was fully dystopian.

Into her overworked and nutritive gel-sustained existence comes a menu for a small cafe that delivers. Their specialty is a spicy soup and a spicy sandwich. The sandwich is made on sourdough bread, and you get an extra slab with the spicy soup. This sourdough is a special thing (you may have guessed that based on the title). This becomes her new favorite food, and what she eats when she's not consuming the gel.

She develops a semi-relationship with the brothers behind the soup/sandwich, and when they have to leave the country, they give her a part of their sourdoughs starter and a lesson on bread preparation (Lois doesn't cook, and doesn't come from a family that did). The starter has specific instructions that reminded me of what's given when someone buys a mogwai -- and just as important. Before she knows it, Lois is baking for herself, to give to others, and even to sell. She's building a brick oven and really branching out socially (and keeping up with her work, too) -- in this, Lois starts to enjoy life and work. I'm pretty sure this is the first time since school (if not ever) that this is true for her.

As she gets more involved with bread making, Lois makes friends, she travels a bit, meets new people -- discovering three strange little subcultures along the. She also carries out an email correspondence with one of the brothers as he pursues his dream. That's all I'm going to say about the plot -- there is more to it than I said, but not much.

There's something like magical realism at work throughout this, but I wouldn't call it that. Mostly because, it's weird science, not magic. But it's probably not real science, just science the way we'd like it to work. Not so much so that this is Fantasy or Science Fiction, just... I don't know what to call it. Whimsical science?

It's the way that Sloan tells the story that makes it worth it -- there's a spark to his writing that makes you want to read it. Lois' world is our world, only better (and maybe a little worse), filled with interesting people doing interesting things. There's a humanity in the narration, in the action that I can't get enough of (ditto for his other work). There's a humor throughout, but it's not a funny book. But man, it'll make you happy just to read it. I loved being in this world -- it almost didn't matter what happened to Lois and her starter (not that I didn't enjoy it), just reading Robin Sloan's prose is good enough for me. I've got a list of 10 quotations I wanted to use here that I couldn't come up with a way to force into this post, and I think I could've easily let the size of that list double.