Log in with Facebook
or
Wrong email address or username
Sign up
Already on BookLikes? Log in!
Incorrect verification code
Please, check your email, the code to access your BookLikes blog was sent to you already.
Enter code:
« Back Send
back to top
Search tags: stupid-love-triangle 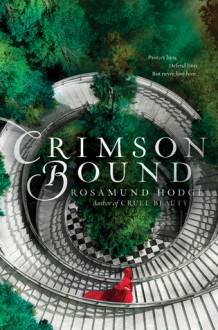 Okay, how will I be able to explain this story's rating when in fact I mostly hated this?
_______
One star goes to the cover designer: Erin Fitzsimmons
You're amazing. Your work alone sells books.

The other star? Yes, it goes to the story. For the fantasy aspects, solely. Especially the part regarding the "pins and needles" situation... and I am going to leave it at that, because I don't want to spoil it.
Why couldn't the story have had more of those aspects?

In the last pages the author tells us that she was inspired by three works. I've read one of them. It's by one of my favourite authors: Patricia A. Mckillip and it's called "Alphabet of Thorns"(and not even my favourite one).
Curiously, I have to say that the only pages in this book that for me where worth reading did remind me of Patricia Mckillip's writing style. Basically the parts where Ziza and her brother make an appearance.

As for the rest, I couldn't connect with the writing style.
This had a first great paragraph, and all of a sudden, voilá three years have passed, and everything is a mess.
We have a girl who has turned into a badass without us seeing it.

We have two friendships that feel really weak. One with a guy who apparently mostly behaves as an idiot, and the other with a girl, so it can be said that there's girl friendship in the story.

Fairy tale retelling of Red Riding Hood...where?
Honestly this was the weakest retelling I've ever got my hands on.

The setting in which the story takes place...
I don't know... ~Versailles circa Louis XIV~ A king who doesn't leave the throne, a bishop _ some sort of Richelieu? _ who wants to take his place...
One too many dialogues and threads connected with religion _ not something in which I am particularly interested while I am reading YA _ made of this, _FOR ME _ a mess.

As for the "girl with the Silver Hands" fairy tale _ also part of this tale _ in this case, we have a boy with silver hands who is seen as a saint by the commoners and as a source of dislike for Rachelle.
She dislikes him, and doesn't trust him _ which is understandable _ but then all of a sudden, love appears _why?_ and voilá: One love triangle coming right up.

A messy love triangle that involves a girl choosing a side, because she doesn't think she's good enough for the one she really likes... but wait, she also likes the one who has been by her side the past three years -_-
Stupid love triangle.

Bottom line: A story that I forced myself to finish because I really wanted to know what was going to happen _not because I was enjoying it _, you know, basic morbid bookworm activity.

I've read Cruel Beauty. I had a really hard time with the first part of it, but then I actually liked the second one.
As for Gilded Ashes, the author's novella, I really liked it.
This one I am afraid didn't work out for me.