Log in with Facebook
or
Wrong email address or username
Sign up
Already on BookLikes? Log in!
Incorrect verification code
Please, check your email, the code to access your BookLikes blog was sent to you already.
Enter code:
« Back Send
back to top
Search tags: swat 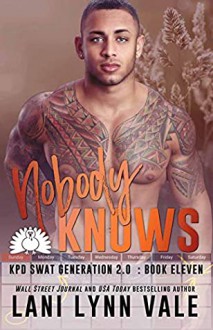 Nobody Knows by Lani Lynn Vale


She had me at hello. I was so determined that Nobody Knows was not the book for me until it came time to say goodbye. Turns out Malachi and Sierra put the moves on my emotions so quickly, I never saw it coming. Every tear I cried, every smile I found, every reveal that I discovered made the experience one of the best I've had. Vale stole my heart right out of my chest without my ever having known. My heart may never recover from falling in love so rapidly. My favorite of the series. 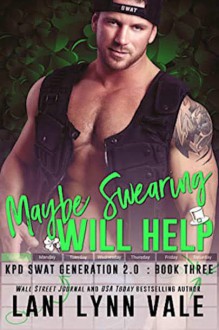 From heartstopping to heartwarming, Lani Lynn Vale definitely makes her presence known. At first glimpse, she entices with humor and then tempts the senses with so much more. Maybe Swearing will Help is endearingly, alluring. Ford and Ashe sneak up on your emotional blindside to wreak havoc on your heart. A story like this one is easy to love. The hard part is saying goodbye when the end has come and gone. 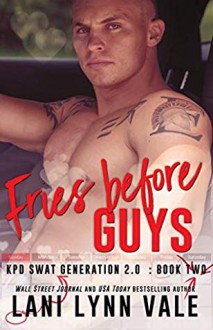 First impressions can be brutal, but it's the surprising twists that make the journey worthwhile. Neither Derek or Avery are looking for permanent. However, sometimes life has other plans. From awkward first impressions to dangerous situations and steamy attraction, Fries Before Guys is as unpredictable as it is entertaining. Vale packs heat and heart to deliver unforgettable.

SWAT: Special Wolf Alpha Team #10, I had been anticipating this one and it did not disappoint. This can be read as a standalone but the entire series is worth the read.

Rachel is still relatively new to the whole wolf thing, she still has nightmares about the event that activated her wolf DNA, it would give me nightmares too. They were getting better but ever since L.A. (the events in the last book) they have gotten worse and Rachel is afraid she's losing her mind because now she's started to see and hear things. It doesn't help that every so often she gets a delectable scent in the air that's gone as quickly as it appears.

Knox is known to make impulsive decisions, like joining the Navy, becoming a SEAL, leaving the Navy but his last impulsive decision put in hip deep in trouble by joining The Hunters. He believed their scare tactics it wasn't until his first mission with them that he regretted his rash decision because in the end he ended up as one of werewolves. He saved one by taking a bullet meant for her, she could have killed him but she let him go. He saw her again in L.A. and knew that if there was anyone her could talk to about what happened to him it would be her.

Two things happen in this book, aside from the smokin' hot romance between Rachel and Knox, The SWAT is put on protection duty of the DA whose life is being threatened because her most recent case. Her husband has also hired a private firm to handle security so SWAT will be working side by side with them bring together Rachel and Knox. Thankfully no one else knows about Knox being a former Hunter but Rachel and one other, but he isn't there right now. The other thing is that Rachel thinks she is losing her mind the crazed man who tried to kill her keeps appearing keeps talking to her. She agrees to help Knox learn who to be a wolf bringing them in even closer contact with each other, they feel safe with each other, trusting each other came easily. Knox knows about what happened and he wants to help but how can you protect someone from their own mind.

Overall, it is a great read. I loved Rachel and Knox. There aren't very many more of these guys left so I hope that means Tyler's introduction to the FBI special unit will lead to a spin-off series. 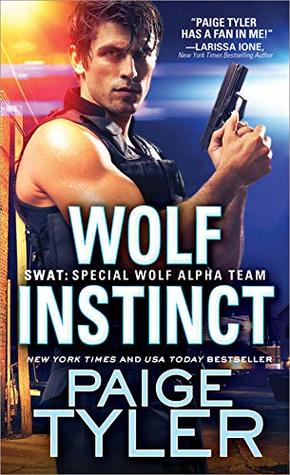 SWAT: Special Wolf Alpha Team #9, wow, book nine already. Out earlier this summer if you haven't the chance yet I highly recommend this series. Throughout the book the SWAT has discovered they not alone, between the Omegas and the Betas but now they discover so much more, the shifters aren't the only paranormal out there. There is a continuing story arc but each of the book is a stand alone you can read it just by itself but really these books are quick and easy to read and so good it worth reading all of them.

The sexy former SAS Brit, Zane, and some of the others go to L.A. to track down the one who betrayed the pack. Zane is slowly recovering from the poisoned bullet that nearly cost him his arm, he's not sure he'll ever get back to full strength but that's not going to stop him from catching the SOB who was behind the attack in the last book. FBI Special Agent Alyssa Carson is part of a unit that technically doesn't exist. She's in L.A. following a lead on a missing persons and the connection to an exsanguinated body. Alyssa has seen some weird stuff but she is in no way prepared for meeting Zane, the hunters and all the other weird stuff L.A. has in store for them.

Overall, it's an exciting read. Excellent action, sweet and hot romance, wonderfully developed characters with the right amount of angst and witty banter.