Log in with Facebook
or
Wrong email address or username
Sign up
Already on BookLikes? Log in!
Incorrect verification code
Please, check your email, the code to access your BookLikes blog was sent to you already.
Enter code:
« Back Send
back to top
Search tags: tea-tree-oil 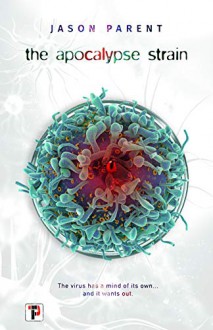 This horror/sci-fi mashup was fun as all get out!

At an isolated lab facility in Siberia a group of scientists are studying a material they nicknamed "Molli." Of course, everything is not as it seems on the surface, and not everyone at this lab is here to study. As with any new discovery, many creative uses for this new substance can be found, but what if it falls into the wrong hands? Is that what happened here? You'll have to read this to find out!

This isn't about a pandemic, just to be clear. Mr. Parent did not jump on that bandwagon. I chose to read this book as an homage to John Carpenter's The Thing, as well as, maybe, Alien. In that regard, as an homage, you really couldn't get much better than this.

THE APOCALYPSE STRAIN evokes all the emotions and feels that those two films did, plus some. With a diverse cast of characters, there's a certain point where everything takes off, however, the start is a little slow to get going. The second half of this revealed itself to my brain as a film.

There were a few things that didn't quite make sense, (the protestors outside a remote Siberian lab? What?), but I let them roll off because, hey-this is supposed to be fun! I'm sure some will say this is derivative of the films I've mentioned and other things too, and maybe it is. For me, reading it as an homage, it worked!

I had a lot of fun reading this, especially in the second half where everything really takes off. Recommended, especially to fans of The Thing and/or Alien!

Get your copy here: THE APOCALYPSE STRAIN

*Thank you to Flame Tree Press and to NetGalley for the ARC of this book in exchange for my honest feedback. This is it!* 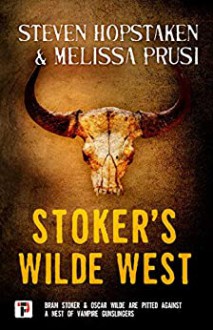 STOKER'S WILDE WEST is a follow-up to last year's STOKER'S WILDE. I think this book is even better than the first.

Bram Stoker is about to take the theatrical group he manages for Henry Irving to play NYC. He plans to bring his wife Florence and their new son, Noel, along for the ride. Oscar Wilde has recently returned from touring the states and has developed a bit of fame there. When Stoker is asked by Robert Roosevelt to help the Americans in sussing out a nest of vampires, Wilde joins him and we're off for a Wilde ride!

Like Dracula, this book is in epistolary form, which I love. Culled from the characters' journals, reports to the White Worm Society, (a group which formed to investigate the occult, among other things), and diary entries, we are treated to different viewpoints of several events. These are really what makes the book, because these entries are often hilarious as Stoker and Wilde do not really care for each other.

All kinds of famous people from that time in history show up or are otherwise mentioned. Personalities such as Mark Twain, Walt Whitman, the Roosevelt family, and Arthur Conan Doyle, to name just a few. All of which contribute to make this book as funny and interesting as it is.

The historical fiction, a respect for the original works of these authors, and a great sense of humor all combine with some amazing storytelling in this fun wild west story. Highly recommended!

*Thank you to NetGalley and Flame Tree Press for the ARC of this book in exchange for my honest feedback. This is it!* 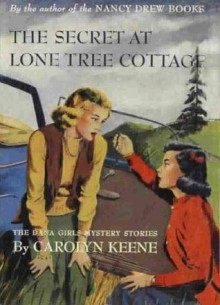 The Dana Girls have been invited on an outing by their favorite English teacher, Miss Tisdale. She is shown in her element, engaging her students by reading from 'David Copperfield' and otherwise being an excellent teacher.The girls are excited to meet Miss Tisdale's parents.

As Miss Tisdale's car leaves the gates a man tries to flag her down, but is dimissed, and the girls put him out of their minds. When the girl's meet Miss Tisdale's parents, they are charmed by her mother, but her father is ill-tempered and prone to monologues about his poor health. Apparently any great shock could kill him. Soon after this visit, their teacher receives a note in the middle of class, leaves the school and fails to return.

Naturally, Mrs. Crandall the headmistress summons Jean and Louise to her office to tell them that Mrs. Tisdale wants to engage them as detectives. Informing the police would mean her husband would find out and that would surely kill him. Mrs. Tisdale had heard all about how the Dana girls had solved the perplexing mystery of the study lamp, after all, so a missing persons case should be no trouble. Mrs. Crandall reluctantly gives permission for this assignment and agrees to help the girls several times even as the case gets more dangerous. This will keep Starhurst School out of the papers.

The girls find her car forced off the road in a remote area. Investigating, the girls find a lost toddler and return her to safety. The toddler's babysitter is an unpleasant woman at first, but proves to be a good person. This is a little lesson that crops up in these books often. Unpleasant women are often worth getting to know, unpleasant men almost never, and Lettie Briggs and Ina Mason should never be given a chance.

As the plot unspools we have an estranged twin sister, fierce guard dogs, rough sailor types and out-of-season boat rides that get nasty. The Dana's Uncle Ned, captain of the 'Balaska', comes in handy more often than you would think.

'The Secret at Lone Tree Cottage' is the second book of the Dana Girls series, but the first three were published simultaneously in 1934 and were written at the same time by the reluctant Leslie McFarlane. Still, it's another overstuffed, fun mystery story.

Next: 'In the Shadow of the Tower'

Previous: 'By the Light of the Study Lamp'

A queendom without an heir.

Acrss the dark sea, Tané has trained all her life to be a dragonrider, but is forced to make a choice that could see her life unravel.

When I heard about this being written and released I was excited, I enjoyed her other series and I was looking forward to this. Since it is such a long book I waited till I knew I have time to read it.

I finally had the time and I picked it up, I figured there is some word building and such but h boy was I in for a surprise. There was so, so much and it was just overwhelming.

So I figured since I have a free credit on audible I get the audio book and maybe that will help….. it did not . I was just so confused for about the first 200 some pages.

There was just so many people and even more things happening on different spots in their world.

I did finally start catching on for the most part and ended up enjoying it, well more than I thought I would. I switched between audio and hardcover so I got it done fairly quickly.

The audio in my opinion was okay, often the dialect or accent was super thick and string and it made it hard to understand and I had to go back to the book to check to make sure I didn’t miss much.

Overall, I thought it was okay, definitely way too much world building for me though, also some things were overly described and others not at all if a little.

I have a hard time rating this book, I liked some and the aspect of the book but I disliked the intro into the book/ world. It was long and confusing.

So I think I go with 2.5 ★ maybe at some point I will reread it and enjoy it more. 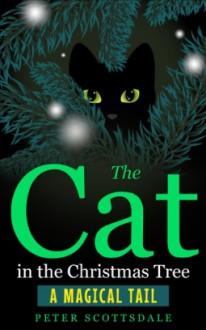