Log in with Facebook
or
Wrong email address or username
Sign up
Already on BookLikes? Log in!
Incorrect verification code
Please, check your email, the code to access your BookLikes blog was sent to you already.
Enter code:
« Back Send
back to top
Search tags: the-doctors-a-jackass

15
review SPOILER ALERT! 2016-09-10 21:59
Mary Shelley's Frankenstein is just the First Stopover in Frankentown and What I Thought Of It A quote that stayed with me:

“If I have no ties and no affections, hatred and vice must be my portion; the love of another will destroy the cause of my crimes, and I shall become a thing, of whose existence everyone will be ignorant.”

It made me think if it is our relationships and loved ones that make us human.

A new word that I learned:

Siroc is probably a variation of sirocco, which is a “hot dust-laden wind from the Libyan deserts.

After reading the following lines:

“eradicating the remains of my melancholy, which every now and then would return by fits, and with a devouring blackness overcast the approaching sunshine.”

I felt the similarity between Frankenstein and the monster he created even more clearly. I can’t really explain why they seem like the same person.

I am really glad that I did read this book. More than anything, I came from it feeling sorry for the poor creature that Frankenstein created and then abandoned. It gave me a new appreciation for the rules of society, ethics, morality that we take for granted. Without it, we might all turn into monsters. I also wanted to point out that while the monster was never taught right from wrong, Frankenstein had been. Yet, the creature seemed kinder than his creator. I don’t think any other conclusion was possible but I still think that it ended rather abruptly.

Now that I am done with the parent material, it is time to move on to the anthology, The Mammoth Book of Frankenstein.

Details of Project Frankenstein can be found here. Some words that I learned: 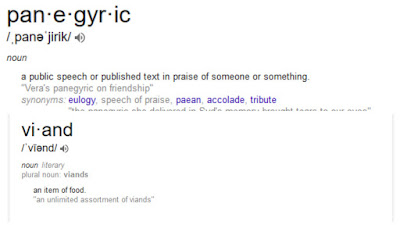 Some thoughts that formed while reading:

The author uses a clever device to keep from providing her readers the recipe to making their own monsters:

"But this discovery was so great and overwhelming, that all the steps by which I had been progressively led to it were obliterated, and I beheld only the result."

Making a behemoth who could crush him easily had not been Frankenstein's first choice. However:

"As the minuteness of the parts formed a great hindrance to my speed, I resolved contrary to my first intention, to make the being of a gigantic stature."

The monster spoke French! I may be coming off as a goofball with this observation but since this is the first time I am reading the book, I didn't already know this.

That the monster had no concept of right and wrong. We are taught about morality as kids and we retain those teaching as grown ups. He did not receive any such lessons. Is it fair to expect him to not steal when hungry? To not enter someone's home unbidden? That got me thinking about something entirely different. If a creature is put together like a jigsaw from parts belonging to other people, would the brain retain the teachings imparted to the donor?

Another thing that I noticed was that Frankenstein is a wimp. He is also a drama queen and very very selfish! Evidence:

"The poor victim, who on the morrow was to pass the awful boundary between life and death, felt not as I did, such deep and bitter agony."

That for the girl who is innocent and yet being tried for murder because of him!

I guessed the meaning of verdure because Botany! Verdant means green and I already knew that, so it wasn't that big a jump.

That Asians are supposed to be slothful and Mahometans forbid their women to...well, do anything other than simply exist, I guess.

Since there is nothing in this novel, if not foreshadowing, it got me thinking. Did I enjoy the book a little less because I knew about the murderous rampage that the monster would be going on? I don't think so. Maybe, that is why spoilers for most books, do not mean the end of the world for me either.

Words that stayed with me:

"It was a lovely sight, even to me, poor wretch! who had never beheld aught beautiful before." Made me feel sad for the poor monster. The illustration above is about the first time he saw his reflection.

"I collected bones from charnel-houses; and disturbed, with profane fingers,the tremendous secrets of the human frame." So perfectly graphic and shudder-inducing!

"I will gut the maw of death, until it be satiated with the blood of your remaining friends." Now, that's a threat!

"...extinguish that life which I had so thoughtlessly bestowed." This, from the jackass.

Allusions and a useful resource to help identify them:

"I was like the Arabian who had been buried with the dead, and found a passage to life, aided only by one glimmering, and seemingly, ineffectual light."

The Arabian is Sinbad and the lines allude to the practice of burying a surviving spouse with the dead one! Find it and the rest of the allusions here.