Log in with Facebook
or
Wrong email address or username
Sign up
Already on BookLikes? Log in!
Incorrect verification code
Please, check your email, the code to access your BookLikes blog was sent to you already.
Enter code:
« Back Send
back to top
Search tags: the-gurkha-and-the-lord-of-tuesday 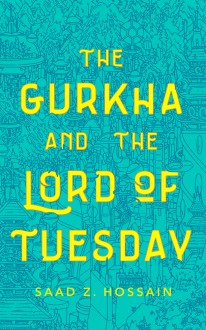 Melek Ahmar, an imprisoned djinn king and among other things The Lord of Tuesday, who has just woken from a millennia long slumber in his prison and is completely forgotten by all but himself, is dead set on retaking the rule of at least some of humanity. Climate change however has caused all humans to drone together in big mega cities where the air gets cleaned all the time by an army of nanobots.

The closest city and an easy starting point for Melek Ahmar is the city of Kathmandu Inc. ruled by the AI Karma, who has abandoned money in favor of Karma points. Together with Bhang Gurung, a Gurkha soldier even the djinn is a little bit afraid of, he travels to the city in order to start a revolt and take over but also to have a good party.

Like I said, this was lot of fun. It is impossible to put this novel in a genre or even try to begin to explain what makes it so much fun. It was original and it never failed to surprise me. Besides, many times I found myself grinning. Would recommend to everyone who wants to know what all the fuzz is about or wants to read something else for a change.