Log in with Facebook
or
Wrong email address or username
Sign up
Already on BookLikes? Log in!
Incorrect verification code
Please, check your email, the code to access your BookLikes blog was sent to you already.
Enter code:
« Back Send
back to top
Search tags: the-hollows-read 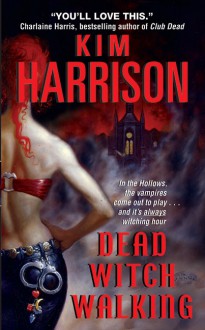 So, Obsidian Blue & I are buddy reading The Hollows - one book every two weeks is the general plan, but we'll see how things go. She's been busy, I've been busy. Shit happens, right?

Anyway, Dead Witch Walking is the first book of the series. I thought I had read it before, but now having actually read it, I'm pretty sure that I only read about the first chapter before setting it aside. You can see I've given it three stars. A more detailed explanation would be:

Things I liked: Jenks. Nick. The fact that human beings are terrified of tomatoes. The set up. The action. The old guy from down the blog (Keasley?). The head of the IFB (totally forgot his name).

Things I didn't like: Ivy. Vampires aren't supposed to be sullen and mopey. Come on. Denon. What a douche.

Things that I hope improve: Rachel. What do I say about the main character? She is so reckless that she seems stupid and incompetent. She's obviously neither of those things - she's able to do serious spell craft. But fuck, woman, use the brains that god gave a duck and stop using such awful judgment.

Overall, I think the series has great potential. The beginning dragged, and Rachel needs to pull her head out of her ass.